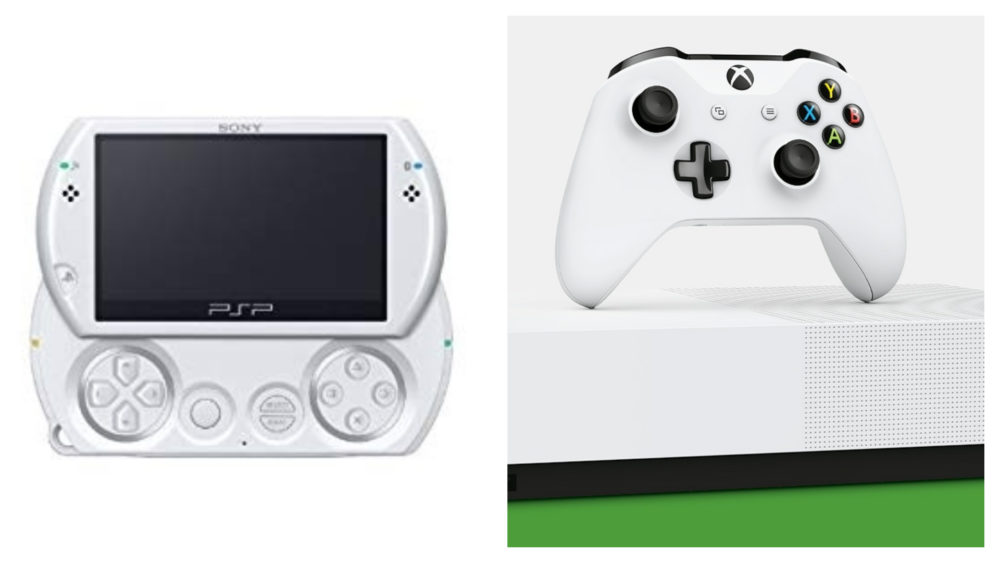 Yesterday, Microsoft revealed the Xbox One S All-Digital Edition to the… confusion of a lot gamers. It’s not that the idea is completely foreign to the community at this point. We’ve seen all digital consoles before. Most PC players play all digital at this point.

The problem with the disc-less version of the Xbox One S is the timing and the price point. If this is supposed to be a test run for future disc-less consoles, then I fear this is going to be rough experiment. Mostly because it shares so many similarities with the extremely ill-fated PSP Go.

The PSP Go released back in 2009, only two years before Sony’s next gen handheld was released, the PlayStation Vita. This was a sleeker, more compact version of the regular PSP, however it came at a premium.

There was no disc drive which meant it had no compatibility with any UMD discs that prospective convertors would have owned.

Even if you were buying a PSP for the first time and were considering getting the Go, you were limited to what was on the PSP storefront, paying full price for many games, regardless of age. Sales and digital discounts weren’t as generous or frequent back in 2009.

The worst part was the price point though. The PSP Go launched at a staggering $250 in the United States. This wasn’t that much cheaper than a PlayStation 3 at the time, which you know, had a disc drive and better games.

The question, then, was who was this for? Someone who wanted to pay more money for a PSP, have access to fewer games and at higher prices? For what trade-off exactly? A slightly nicer looking piece of hardware? Sure, it was pretty and smaller, but that was just about all it had going for it above what regular PSP offered.

And just for the record, before we move on, I’m a proud(?) owner of a PSP Go, but in hindsight, it’s easy to see how silly that purchase was. I had never owned a PSP and was allured by it’s sleek compact look. I was one of the very few who made the jump.

This isn’t exactly the same situation as the Xbox One S All-Digital Edition. Microsoft’s offering isn’t nearly as tone deaf as Sony’s PSP Go, but it’s still quite unattractive and shares lots of similarities.

The All-Digital Edition is also priced at $250, but at least it’s a home console with a deep library of games. However, it’s still only $50 cheaper than a regular Xbox One S.

For less than the cost of one new game, you can give yourself more long term financial flexibility by having the option to buy used physical games on the cheap (especially as the generation wraps up) versus limiting yourself to the prices found on the Microsoft Store.

To be fair, the All Digital Edition does come with three games (Sea of Thieves, Minecraft, & Forza Horizon 3) but you can find bundles for the Xbox One S as well. Here’s a bundle with Anthem for $250 from Best Buy as an example, which took me all of 30 seconds to find.

If Microsoft really wanted to make one final push at getting the Xbox One in as many houses as possible, I would have expected a price point somewhere between $150-$199. That would have made it a compelling end of the generation buy, especially with Xbox Game Pass.

Trying to encourage late to the party adopters to opt for an Xbox Game Pass subscription appears to be the true goal here, but the All-Digital Edition is a half-hearted attempt.

Sure, I guess if that’s your plan, entering this gen super late and just getting Game Pass to play some stuff you’ve been missing out on, this is technically the cheapest way to go about doing that.

However, is that $50 (or in some cases like that bundle we shared above, not even) really worth giving up a disc drive? What is the trade off here? Hell, in the case of the PSP Go, it was at least it was sleeker and more compact. The All-Digital Edition is just the same ol’ Xbox One S we’ve had for years now, just minus a disc drive; which obviously means no 4K blu-ray disc support.

And of course, like with the PSP Go, there looms the spectre of the next generation of consoles being right around the corner.

I have to ask the same question of the Xbox One S All-Digital Edition then as I did the PSP Go: Who is this for exactly? The answer for both cases is I have no idea.