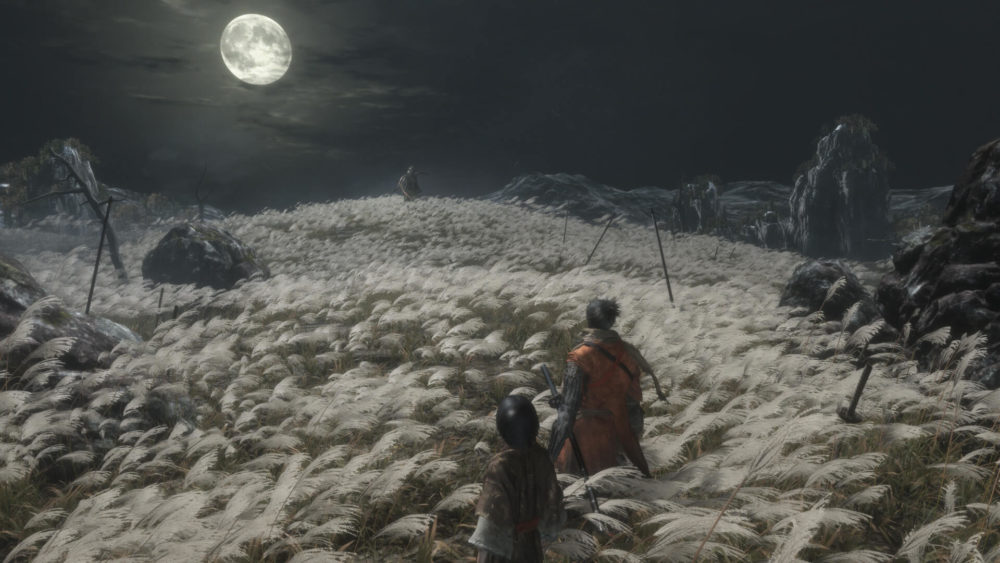 Soulsborne. Souls-like. Bloodsouls. Darkborne. These words are usually not coming out of my mouth when someone asks me what my favorite video game genres are. As someone who lacks patience in gaming, and hates difficulty pushback, Dark Souls and Bloodborne are not games that I enjoy playing.

Toted as being unforgiving and brutal, Dark Souls and Bloodborne constantly push you away from your goal, away from making any sort of progress. All video games do that; obstacles to prevent you from getting to the finish line – it’s how video games work.

However, when you mix the heavy feeling of your character, everything in sight killing you, and the lack of tutorials, FromSoftware’s recent releases have not done it for me. I immediately die whenever I play these type of games and I absolutely have no idea what I should be doing.

The game makes me feel hopeless, scared, and without confidence. It’s not that it’s my fault that I die, but rather the game itself feels like it’s trying to kill me instead of teaching me how to play or adapt to the moveset given to me.

Cliffs are out to get me, long falls are out to get me, the enemies show no mercy, and at no point do I feel a sense of completion or progression being made. I could be doing so well in the game, but if I make one wrong move, I could easily slip off of a cliff, causing me to die.

The whole RPG mechanic just doesn’t speak to me in a game like Dark Souls, as it can be impossible to actually feel the progression you make since you die constantly, losing all of your stuff once again, losing progress. Meanwhile, progression is easier to see in Sekiro with more streamlined RPG mechanics.

Sekiro tells me what I have to do and if you don’t do it, then you’re going to be in trouble; there are sure-fire ways to deal with every enemy encounter, but in Dark Souls, I often see people having to cheese through bosses or tough enemies, like having to lead them toward a cliff or pull off some other kind of trickery.

What I’m trying to get to is that I have never enjoyed a Dark Souls-like game before, until Sekiro: Shadows Die Twice came into my life.

First off, I like Ninjas. Anything in feudal Japan is just my thing and as soon as I heard that Sekiro takes place in that setting, I knew this would be the game that would get me; this is the side door to FromSoftware and I have found my way in.

Fast forward two hours later and I’m dying, constantly; dying over and over again, trying to master the parry technique and become a posture god. But listen, even after constant deaths, I was learning the game, and in a strange way, the game was teaching me as well.

The main difference in Sekiro, when it comes to combat, is the parry system that makes up the majority of your fighting. In Dark Souls, parrying was a thing that you could do but dodging and guarding were more viable.

Dodging in Sekiro will kill you, with the game pushing the player to learn how to deflect perfectly, knocking the posture bar up so that the enemy can be killed in one hit, called a death blow.

Sekiro and the enemies both have posture bars, and as I mentioned, the more that the person gets hit, the easier it is for them to be attacked. Pressing the shoulder button at the perfect time during an enemy attack will deflect their hit, throwing them off. You essentially have to stand there and deflect a few times in order to get a hit in.

It’s fast and frenetic and as other combat skills open up for use; getting a death blow against a powerful enemy is super satisfying, and once you get into the rhythm of deflecting and attacking, it will give you so much joy when you get it down pat.

Unlike Dark Souls and Bloodborne, the stealth element is very useful for taking on all kinds of enemies and reduces your risk of getting seen or attacked from afar.

You can crouch and sneak in the tall grass to get a silent kill on an enemy; taking them out one by one will be way less trouble than strafing around 4-5 guys trying to deflect all of their attacks – it’s not fun.

The several bosses in the game are also extremely difficult, with most of them requiring more than one deathblow before they die. If you explore the area around a boss fight, there’s usually a way for you to do a sneak deathblow from a stealthy position, making the encounter a little bit more manageable.

Even though I’ve only beaten two bosses so far (after 5 hours), I’m really enjoying the world of Sekiro that FromSoftware has created with Shadows Die Twice.

Every time I die on a run, I still feel like I’m progressing, even If I lose money and experience, simply because I’m learning more about parrying and I’m killing enemies in several different ways, making each run unique and still pleasant.

There are also some checkpoints here and there where you can heal, go back to this guy who upgrades your prosthetic arm and increases other stats, which makes it pretty forgiving whenever you die over and over again. You usually won’t have to go through an area again for too long, but you do lose a lot whenever you die.

You lose half of your money and all of your experience that you gained in that gameplay session, but it doesn’t take long to kill the enemies again to get that same experience back.

It just doesn’t feel as hard as other FromSoftware games. I’ve probably tried playing Bloodborne three times to then just face death countless times, causing me to quit. Trust me, I’m impatient; Sekiro actually takes your time seriously and welcomes you to the challenge it presents to you.

The game wants you to learn how to parry and if you don’t, you will die repeatedly. That’s why I think I like it more than its brother and sisters; it’s never the game’s fault for you dying, it’s your lack of skill and timing.

And also, after playing the first few sections in Sekiro, I completely get why people are fans of Dark Souls and Bloodborne. It’s not about the end-game or the story, but it’s about that sense of achievement that you feel when you finally defeat that boss that you might have been working on for days.

I probably still won’t go back to those older games, due to their lack of Sekiro’s quick-paced and fluid combat, but I understand the reasoning for all of the love that Soulsborne titles get.

As I power through Sekiro: Shadows Die Twice, I hope to learn more awesome ninja skills and rid the world of Dragonrot. If you guys have any tips for a noob like myself, leave a comment down below!