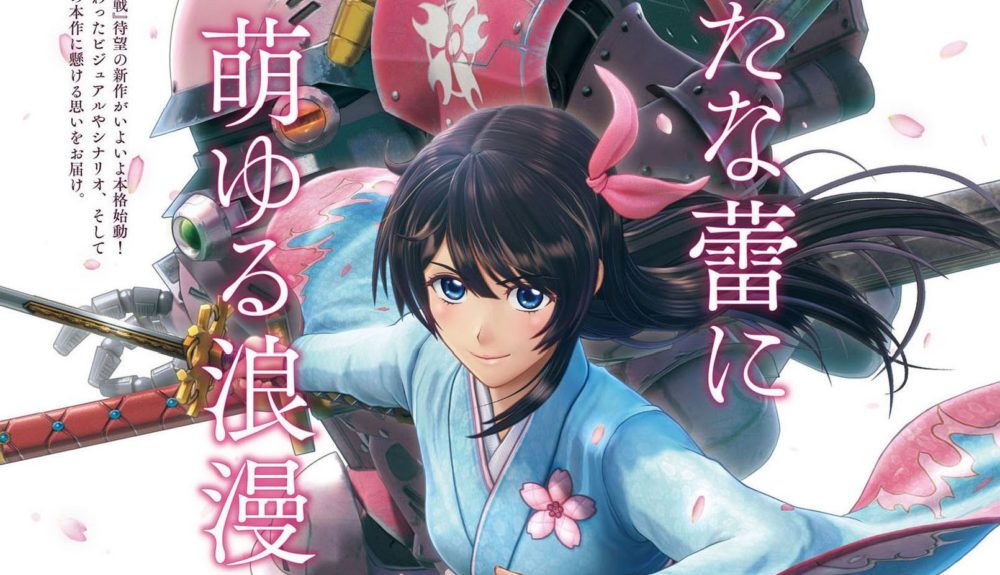 Today’s issue of Weekly Famitsu included a large spread on the Shin Sakura Taisen or Project Sakura Wars as it’s tentatively known in the west.

First of all, we learn more about the characters.

Protagonist Seijiro Kamiyama (voiced by Yohei Azakami) is a 20-year-old imperial soldier belonging to the Navy’s special forces appointed as the captain of the new Imperial Combat Revue’s Floral Division.

Main heroine Sakura Amamiya (voiced by Ayane Sakura) is 17, and she enlisted in the Imperial Revue out of admiration for the previous protagonist Sakura Shinguji. She hopes that more will join and to lend her strength to help rebuild the revue.

Hatsuko Shinonome (Maaya Uchida) is also 17, and she is a shrine maiden from the well-known Shinonome Shrine. She’s a true city girl that loves the downtown area, but she is also very reliable.

Azami Mochizuki (Hibiku Yamamura) is 13 and she is the heir of the Mochizuki ninja clan. She is a martial arts genius, handy with weapons and battle tactics. She firmly believes in the “108 commandments” passed down from generation to generation in her village.

Anastasia Palma (Ayaka Fukuhara) is 19 years old and she transferred from Europe to join the Imperial Revie. She can perform a wide range of roles from men to sexy roles thanks to her looks and star-level acting skills.

Clarice (voiced by Saori Hayami) is 16, hailing from Luxemburg. She is pretty and smart, passionate about literature and a real bookworm. Thanks to her curiosity, she learns a lot every day through reading. Her real name is Clarissa Snowflake and she comes from a noble family. She is also the heir of the “Juumadou” magic passed down from her ancestors.

The gameplay loop alternates adventure sections and battles, and while the story advances it’s important to evolve the bonds with the heroines. Everything is displayed in full 3D, including the adventure sections, allowing the player to fully explore the Imperial Theater and the district of Ginza. This also includes dialogue with characters you’ll meet around and various storylines.

Exploration and events happen on the same map, and buildings are modeled in great details. It’ll be possible to explore every nook and cranny of the Imperial Theater.

The story progresses by going to specific locations on the map or talking to specific characters, which will trigger events. Those event triggers are marked by an icon so you know where they are. Your current objective is displayed on the top right of the screen, and there is a minimap on the lower right so you won’t get lost.

Our hero will also have a gadget named “Smartron” which is an evolution of the Portable Kinematron. It can be used to communicate with team members and it’s packed with useful features and a map display.

The “LIPS” system will make a comeback for dialogue, prompting the player to make choices within a time limit. If you solve the heroine’s problems and gain their trust, it’ll have a positive effect not only on the story, but also in battle.

Of course, the series’ iconic steam-powered mecha make a comeback. In this new game, there is a new generation of mecha named “Ryuushi Sentoki.” Over the past ten years, many countries have adopted them and elaborated on the formula.

We get to see the “Ryuushi Sentoki Mugen” which is the first mass-produced model by Kanzaki Heavy Industries (of which Sumire Kanzaki is the heir). It’s a mecha that can be used intuitively with few issues, and it’s the mainstay of the Imperial Combat Revue’s Floral Division.

We also get to see the Ryuushi Katchu Kinshi Kikoubu, developed by Kanzaki Heavy Industries based on the Koubu Mark 2 from Sakura Wars 4. While its overall battle power is inferior to the Ryuushi Sentoki, it’s the base upon which the Mugen was developed.

Below you can check out all the images. If you’d like to see more, you can also check out the original Japanese reveal and the announcement of the western localization.