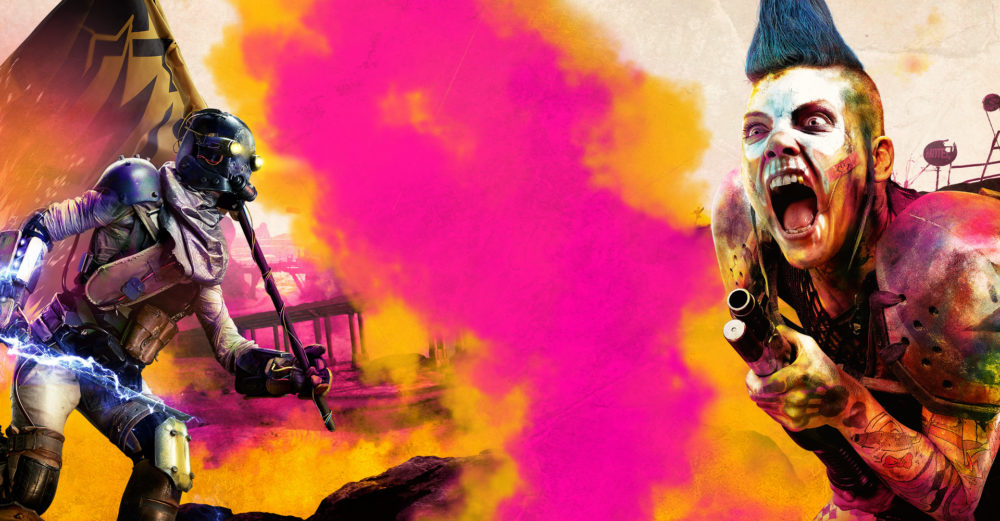 Id Software and Avalanche Studios have teamed up to deliver an entirely different kind of Wasteland in Rage 2. Adding colors like pink and yellow to the color pallet turns a rather depressing and dreary setting into a fun and wacky world worth exploring.

I sat down for roughly an hour at PAX East this year to play Rage 2 and walked away wanting to inhabit that world for far longer. There is so much life and character around every corner it’s hard not to get swept up in just exploring.

The demo began in an outpost where I was given a car mounted with a mini-gun and rocket launcher and sent on my way to explore the world around it. Driving in Rage 2 feels excellent, which is no surprise considering Avalanche Studios made the Mad Max game, and driving was easily the best part of that game.

The Wasteland offers so much variety whether you’re just exploring the open roads, hunting down enemy infested outposts, or stumbling across large convoys of enemy vehicles to gun down. There are very few moments of reprieve from an activity and those moments are primarily used to soak in the world around you.

Points of interest on the map come in the form of outposts. Raiding an outpost consists of killing enemies while trying to complete small objectives like defending an area or destroying enemy supply crates.

This is where I got to experiment with a ton of different weapons and combat abilities which all felt unique and fluid when strung together. Fans of Doom will notice that the weapon wheel is there which allows for changing weapons extremely fast to create synergy between your toolkit.

Shoot an enemy from afar with a rifle, dash into close range, and quickly tear them apart with a shotgun blast. This simple yet effective maneuver make you feel like an absolute powerhouse and is just one of the many combos people will create.

Weapons aren’t the only tools at your disposal though, there are a handful of abilities like an anti-gravity grenade to suspend enemies in the air, a deployable shield to block bullets, and an earth-shattering ground pound to eviscerate enemies. These in tandem with your weapons create a wonderful combat sandbox to play around with.

The real standout of Rage 2 though is the Wasteland itself. Driving around large stretches of land doesn’t feel like a chore because there is always something in the distance. Whether that is a large towering structure filled with enemy raiders or giant ramps to drive off of in your car, everything feels like it belongs to further immerse players.

At one point I was driving through a jungle when I noticed a large tower cobbled together with scavenged metal. I quickly hopped in an enemy vehicle and drove over to it. It turns out it was a huge building filled with enemies are supplies, which I then had to fight my way all the way up.

Combining together all of the weapons and abilities, I was unstoppable as I ascended the tower obliterating everything in the way. Progressing through multiple floors and after a long elevator ride, I emerged at the top to collect some supplies and realized this was just a simple side mission, but it felt as over-the-top as most games main missions.

After spending only an hour with Rage 2 it was apparent that this game has so much to offer outside of just a story. Exploring the colorful wasteland of Rage 2 is something I’m looking forward to when it releases on May 14 for PlayStation 4, Xbox One, and PC.