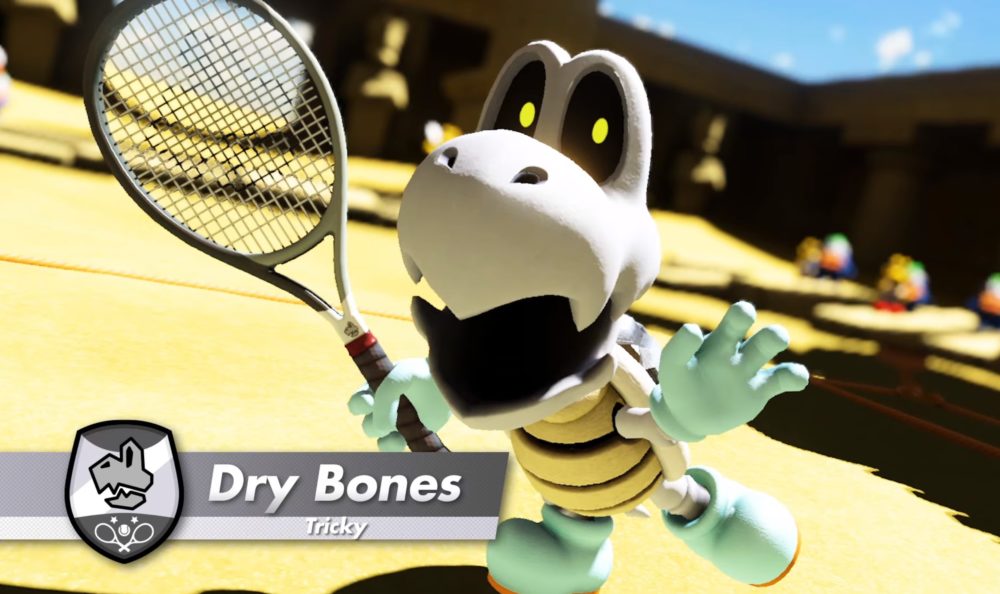 Nintendo dropped a trailer today (embedded below) showing off the moves of the newest playable character coming to the ever-expanding roster of Mario Tennis Aces.

Dry Bones will be available as a participation bonus for players who take part in the game’s online tournament running throughout May. On June 1, the skeletal Koopa will be available for everyone who owns the game.

Dry Bones will join the Mario Tennis Aces lineup on the heels of Kamek, another Koopa, who is currently available as the April tournament bonus. As with Kamek, Dry Bones will be another “Tricky” character like Boo and Rosalina– meaning that curved shots will be at the center of the undead tennis star’s arsenal.

In the trailer below, we get a look at Dry Bones’ artful Basic shots, his disorienting Trick shots and a Special shot that puts the character’s infamous reanimation skills to work.

Mario Tennis Aces has received a steady stream of new characters since the game’s release in June of 2018. Dry Bones will be the 28th player to join the lineup, the 14th added since launch.

For more news on Mario Tennis Aces, and to learn more about the latest playable characters before the Koopa buddies (Pauline, Boom Boom, and Luma) be sure to check out Twinfinite.