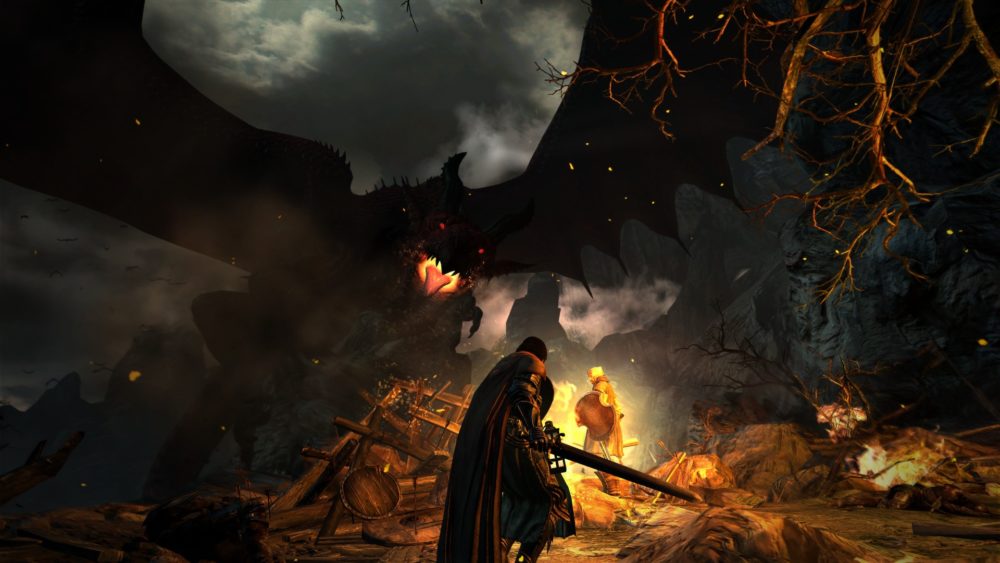 Dragon’s Dogma is one of those outliers for a company like Capcom; a gutsy move they made in releasing an ambitious original title, with no existing franchise or known name to lean on. Yet, Capcom’s gamble paid off magnificently, with one of the very best cult classics of last generation.

Despite having its fair share of problems, Dragon’s Dogma was a perfect storm of gameplay mechanics that made it stand out.

Combat was Souls-like but much faster, giving you access to a variety of different character builds that all play hugely different. The minutia of the game’s combat is what really makes it excel, however, especially with the ability to climb and grab onto enemies.

Dragon’s Dogma consistently throws varied enemies at you, forcing you to learn each one’s moveset and tactics. You need to be smart about how to combine your abilities and attacks, as well as when to back off and recover.

Another layer of complexity is added onto the combat with the Pawn system, ethereal warriors that you can summon to help you in battle.

You’ll build a party of yourself and three other Pawns, with the Pawns being able to fulfill the same classes as you. This lets you build a unique party from all the different classes, strategizing things for your specific playstyle.

On top of this each Pawn has their own personality, and they even learn as you progress through the game, becoming more adept at taking down certain enemies, or learning information for a specific quest that’ll help you out.

Since Dragon’s Dogma released in 2012 we’ve certainly seen games that have similar elements, but nothing combined them quite like the former. They managed to build a phenomenal combat system, wrap that in a world oozing with atmosphere, and top it all of with interesting multiplayer interactivity that lets you borrow Pawns created by other players.

Sadly, the latter has never seen a release in the West, meaning we’ve had to stay content with only one Dragon’s Dogma game (and an update) rereleased on multiple platforms. Hence why I’ve played the game on Xbox 360, PS4, and now Nintendo Switch.

It’s high time we get a sequel to Dragon’s Dogma, something that the game’s director, Hideaki Itsuno, has expressed interest in. Capcom even gave him the go-ahead to make Dragon’s Dogma 2, but he chose to make a new entry in his other beloved franchise first, Devil May Cry 5.

On top of that, the series has been green-lit for an animated Netflix series, in the same vein as Castlevania, showing that Capcom still cares about the IP very much. Sounds like the perfect thing to tie into a new game, right?

Imagine what Itsuno and Capcom could do with Dragon’s Dogma 2 using modern consoles and technology. In fact, Monster Hunter World might be a good indication of what is possible.

A diverse ecosystem of different beasts and monsters that interact with each other as well as the player. Epic boss battles on a scale even bigger than the first game. Tightened combat that feels more precise and gives you even greater options for different playstyles, like all the different weapons of Monster Hunter World.

It’s clear that the company wants to continue to redefine what each of their series mean, and the recent success gives them more reason than ever to double down on that idea. Open world games continue to suffer from rote design, despite a few wildly different successes like The Witcher 3 and Breath of the Wild.

Even seven years later, I find myself marveling at how Dragon’s Dogma feels like a breath of fresh air for open world RPGs. It’s great that we’ve gotten the ability to play the game again, but hopefully, a sequel is still something that’s in the cards.

If Capcom wants to keep their momentum going they’ll need to bring as much firepower as possible, with plenty of epic new experiences. You can’t get more epic than clambering onto the back of a giant Griffon or Dragon, and holding on for dear life as it soars through the air, and your allies watch helplessly from below.