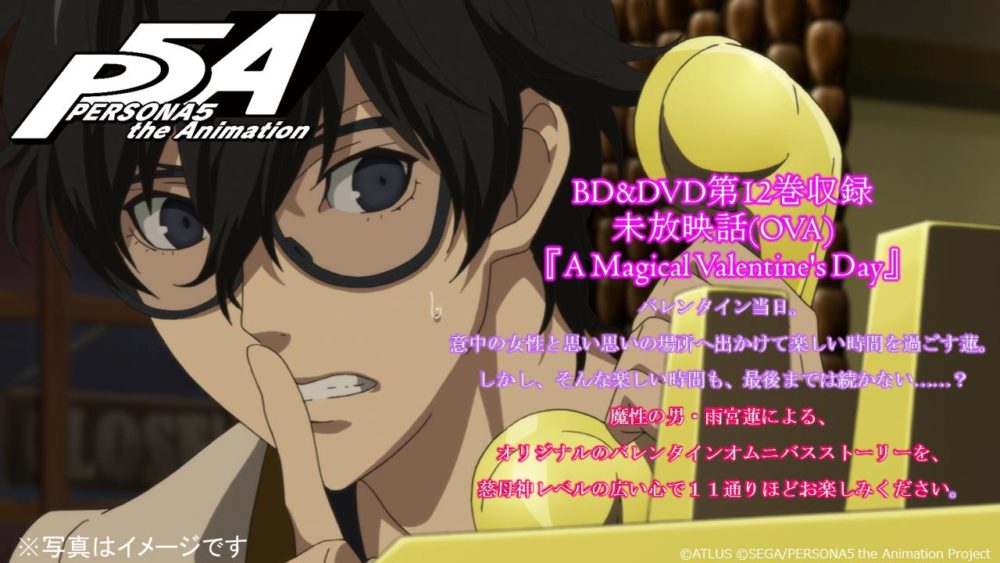 Many who have watched Persona 5: The Animation noticed that the Valentine’s Day part of the game has not been covered just yet. Don’t worry. It’s coming.

Today the official Twitter account of the anime announced that a special OVA episode titled “A Magical Valentine’s Day” will be included in volume 12 of the DVD and Blu Ray release of the series.

In the teaser image that you can see above, you read that our hero goes on a date with his chosen lady, but things don’t go as expected. Apparently, there will be different versions with different outcomes like in the game. He certainly looks like he’s in trouble in the image, seemingly from a certain hilarious outcome. Has our hero Ren Amemiya been a bad boy?

Incidentally, we also get the covers of Volume 12 featuring Caroline, Justine, and Lavenza.

If you missed today’s special episode concluding the story titled “Stars and Ours” you can watch it here for the next six days.

At the end of the episode, we got another reveal of the upcoming Persona 5: The Royal RPG for PS4, even if we still don’t know much about it, besides the fact that it features a new female character who appears to disagree with the Phantom Thieves’ methods.

If you’re interested in Persona 5, You can read our review of the original game. It’s currently available for PS4 and PS3.