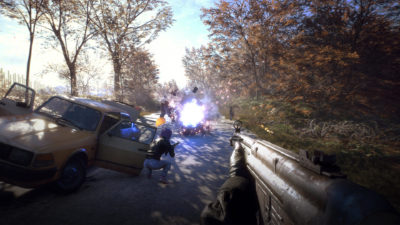 Are There Cheats in Generation Zero? Answered

Avalanche Studios’ Generation Zero, the new open world action game that’s set in 1980s Sweden and sees you face off strange robot creatures, has finally launched. While the game is full of things to see and weapons to find, you might want more from the game. Here’s everything you need to know about if there are cheats in Generation Zero.

Whether you’re playing solo or in co-op with a friend, the game is all about completing quests in the expansive open world, gaining XP, and exploring as you go. With varied enemies roaming the lands too, it can also be pretty dangerous.

Therefore, it would be helpful if there were cheats that allowed you to make your experience a little easier.

Unfortunately, there aren’t any official cheats available in Generation Zero. However, some cheat engines have already cropped up around the internet that allow you to do things such as get unlimited health or alter the game speed, if you’re playing on PC.

Do note though, that these cheat engines haven’t been implemented by Avalanche Studios, so are used at your own risk. Also, it would be best to stick with how they intended the game to be played before messing around with cheats, no matter how fun they can be.

Of course, since the game has only just released, there are sure to be more fan made cheats made available in the coming days and weeks. Also, it’s possible that Generation Zero’s developers add some official cheats to the game sometime in the future. If and when either case happens, we’ll be sure to keep you updated.

That’s everything you need to know about if there are cheats in Generation Zero. For more tips and tricks on the game, be sure to search for Twinfinite.