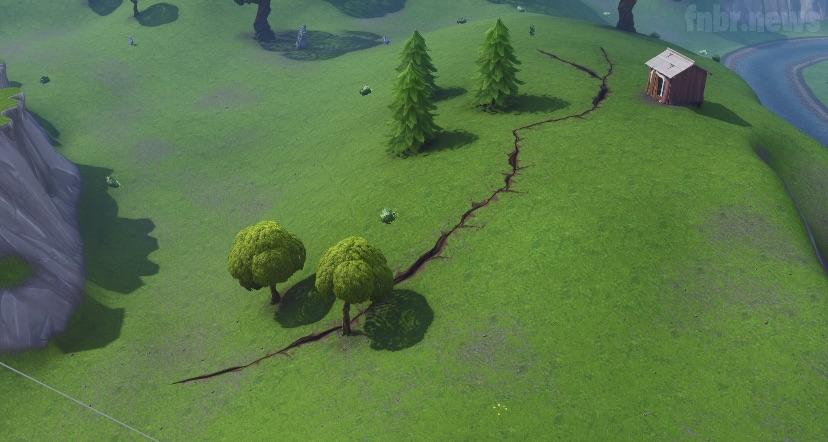 We’re officially in the ‘Overtime’ of Fortnite Season 7, something we’ve never seen Epic do before. We’ve received some fresh new challenges to tide us over for the next two weeks, granting us a chance at a free Season 8 Battle Pass, and fans are still waiting for the Prisoner skin’s stage 4 to become unlockable.

Amidst all of this, though, is something more sinister spreading across Fortnite’s map. Something that’s going to literally tear the map apart by the looks of things.

Just a few hours ago, another cropped up, looming dangerously close to Lazy Links. Of course, Fortnite players aren’t strangers to cracks and tears pulling apart the battle royale world. We already saw the massive rift appear in the sky a few seasons back, as part of that season’s big event.

So what exactly are all these cracks and fissures building up towards in Fortnite?

Well, many believe it’s got something to do with the ‘lore’ of the Prisoner skin. Having been chained up at the top of Polar Peaks, players have been slowly but surely unlocking the Prisoner skin’s various stages with interactable items around the map.

The first was a key, found in the castle atop Polar Peak, removing the large lock off its face. Players then had to venture to a campfire shown in the week 10 loading screen in the desert biome and interact with it in order to seemingly ‘reignite’ the god-like character. The final stage of the Prisoner, however, isn’t yet unlockable, for now.

It looks as though in a couple of days, when the next batch of Overtime challenges go live, one of them will provide players with a loading screen, which may just have been leaked.

As we saw with the aforementioned week 10 loading screen, included above, it’s likely that this is a clue as to where players need to go in order to unlock Stage 4. However, there’s more that can be inferred from this loading screen than a simple clue to unlocking the final stage.

Let’s take a look at it a little more closely. Here, we see the Prisoner unchained and looking pretty damn powerful. He’s surrounded by a circle of fires or torches, and it looks as though he’s summoning some almighty power.

Fans believe that this location is to be found in the northeast corner of the map, near Tomato Temple, but there’s nothing there yet. Similarly, a leaked map appears to show a burnt area on and around Wailing Woods. This area just so happens to coincide with the rough area that the cracks have begun to appear on Fortnite’s map.

All of this lines up to suggest that yes, the Prisoner has a part to play in reshaping Fortnite’s map for Season 8. Wailing Woods looks set to be burnt down and replaced, having never really taken off as a landing location, even after its underground lab revamp a couple of seasons ago.

For now, the specifics are still a mystery. However, theories on there being some sort of volcano are rife over on the game’s subreddit now, and would certainly make sense given the context. There’s even a pretty solid ‘lore’ theory behind The Ice King and Prisoner skins there, too.

The cracks beginning to appear and spread across Fortnite’s map are likely building up to the ‘Earthquake’ event that’s been predicted for quite some time by fans on the subreddit.

Epic has yet to officially confirm a time or date for the event yet, which they’ve done in the past for Marshmello’s live set, the rocket launch, and Kevin the Cube’s big explosion at Loot Lake. However, with the loading screen due to release as an Overtime challenge reward over the weekend, we’re expecting one pretty soon.

Fortnite has seen a new competitor enter the battle royale ring in the form of Apex Legends, having amassed 25 million players in just a few days.

With a free Battle Pass for next season on the cards for completing Overtime challenges, Epic will be hoping that this incentive, combined with the expected earthquake event will be enough to reignite the hype ahead of the new season and fend off the competition.