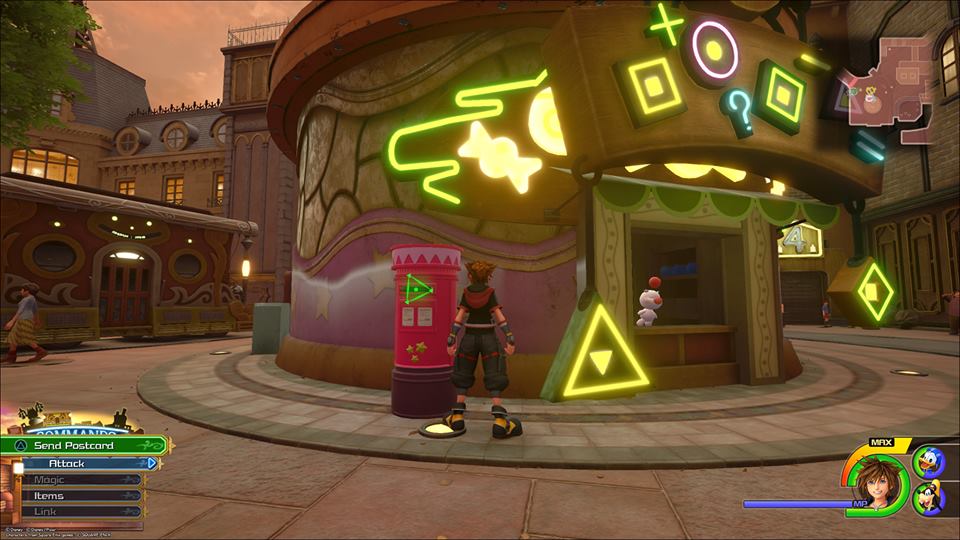 Kingdom Hearts 3 has finally arrived and if you’ve played a game in the series before, you’ll be immediately familiar with most of the mechanics, however, there are a few new elements. As such, here’s where to use prize postcards and what you get in Kingdom Hearts 3.

As you’re playing Kingdom Hearts 3 you might notice that the Moogle Shop starts giving you Prize Postcards. Basically, you’ll get these simply by spending Munny at the shop.

When you get one you might hear Sora mention a post box in Twilight Town, so that’s exactly where you should head to.

Once in Twilight Town head to the shop that has the Moogle in it, then look on the left side of the building. You should see the post box so walk up and press triangle (Y) to send off the Prize Postcard. Every time you send one off you’ll get a reward for it.

Most of the rewards are synthesis materials, but occasionally you’ll get a nice piece of Armor or an Accessory as well. It’s definitely in your best interest to send some off whenever you have them while playing Kingdom Hearts 3, and luckily it’s quite easy to get back to Twilight Town.

To fast travel there just head to any save point and then select the World Map option. On the map select Embark then navigate over to Twilight Town and select it, then you’ll get to choose which save point you want to load in at.

That’s everything you need to know about where to use prize postcards in Kingdom Hearts 3. For even more tips, tricks, and guides make sure to check out our wiki. Here are a few others you might want to look at while playing.

Question: Where do you use Prize Postcards and what do you get in Kingdom Hearts 3?

Answer: To use Prize Postcards head to Twilight Town and go to the shop with a Moogle in it. Just to the left is a post box to put the cards in, and each time you mail one you’ll get a reward; thing like synthesis materials, or even equipment and accessories.