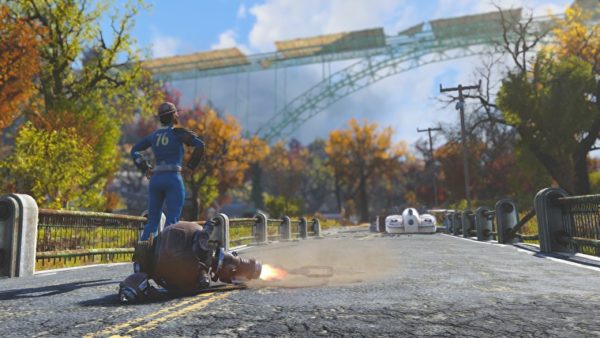 Fallout is one of the most revered franchises in gaming, owed to its unique setting, branching narrative, and compelling RPG gameplay. So far, though, the latest installment in the series, Fallout 76, has left many fans, loyal and casual alike, angered and confused.

While there are a number of different reasons for that anger and confusion, ranging from bugs to gameplay mechanics, a lot of the frustration boils down to the game’s complete lack of NPCs, which makes Fallout 76 feel like a shallow, lifeless, and largely dull environment to explore.

The decision by Bethesda to distribute quests through robots, terminals and holotapes creates a huge crater where the story should be. The personality and charm that NPCs brought to the world is replaced with a books-on-tape mission structure.

While Bethesda argues that the holotapes, notes, and terminal logs are actually story, the truth of the matter is eerily similar to Bungie’s mindset when Destiny released in 2014. Bungie’s title, though it did feature NPCs in its game, was heavily criticized for its lack of story. The main campaign was only about six hours at maximum and featured little to no interesting plots points throughout missions.

Bungie stated that fans simply needed to dig into the Grimoire cards they created — located outside of the game on their personal website — in order to find more engrossing info. But the truth is that lore is not the same thing is a story.

Fallout 76 falls into the same boat. Reading terminals and listening to holotapes isn’t story, it’s extra info that builds the world and setting around players.

Calling it anything else is misguided. Take into account that these apparent story elements in Fallout 76 have all existed in past installments in the series as background info and it becomes more apparent that the game is disguising lore as story.

One of Fallout’s most alluring gameplay mechanics, dialogue choices, has also been eliminated as a result of the choice to get rid of NPCs.

Gone are the days where players could convince the final boss not to fight by investing in charisma and speech. Now it’s simply about listening to an audio tape and running off to a location to get something or kills someone, better known as a fetch quest.

The lack of dialogue choices also means that branching paths are all but gone from the story as well. Players no longer have the option of choosing between chaotic events like blowing up Megaton or disarming the bomb like they could in Fallout 3.

An argument could be made that NPCs were left out of the world due to the always-online aspect of Fallout 76. The idea is that as other players might kill an important person you didn’t want them to.

This problem isn’t difficult to solve at all though, as Bethesda proved with Elder Scrolls Online, another Bethesda (via Zenimax) title that received plenty of backlash from fans of the series.

Unlike Fallout 76, though, ESO didn’t eliminate NPCs from its game. What they chose to do instead was simply make it so that quest givers and other essential NPCs would not be killable. For some, this slightly breaks immersion, yet it is better than not having them at all.

Not having NPCs at all results in a gray, boring, and empty world. That is something that Fallout games have never been, despite the post-apocalyptic nature of the setting. Fallout games have always been about choice, interaction, and the zany, insane characters that managed to survive in a bleak wasteland.

Only in this series’ post-post-apocalyptic environment can you find a town run by children, make a Super-Mutant best friend, and choose to Nuke a place simply because the story allows it. Sure, there are still quests, characters, and situations in Fallout titles that center around the fallout from The Great War, but most things in the Wasteland center around people trying to persevere and just live their daily lives.

In short, getting rid of NPCs in Fallout 76 takes away dialogue choices, story, interaction, ambiance, mission variety, and a handful of other things that are vital to the series’ popularity and appeal. And it’s a travesty that Bethesda compromised so many of the things players love about the Fallout series, for what we can only assume was a rushed attempt to breach the multiplayer market.

Void of NPCs, Fallout 76 is destined to soon become as barren as the wasteland that makes up its West Virginia setting.