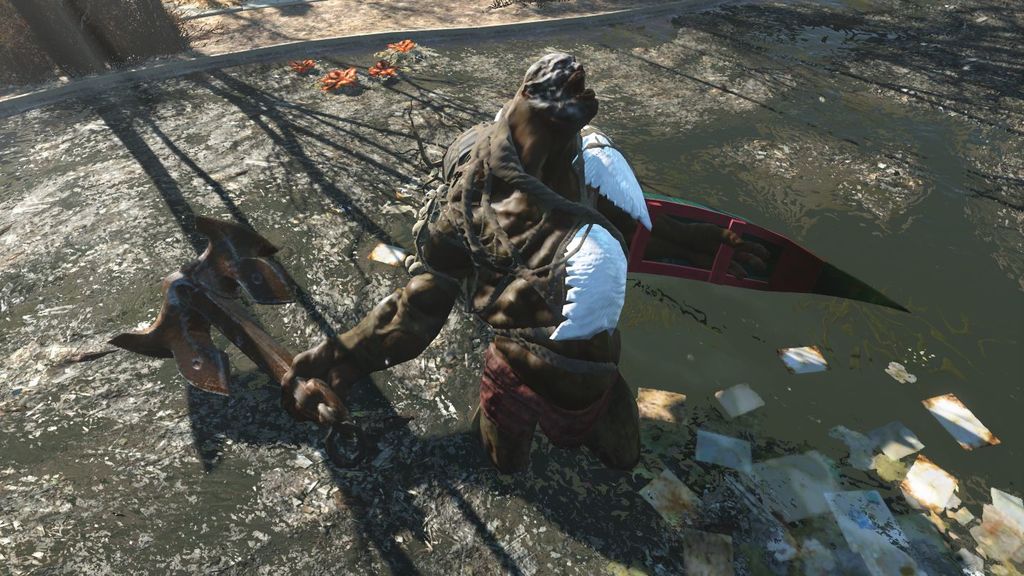 There are plenty of formidable creatures in Fallout 4, but few are quite as terrifying as Swan. This super mutant behemoth not only weighs in at a daunting level 50, but also has a number of attacks that’ll drain your health bar faster than you can blink. Here’s how to beat Swan in Fallout 4 and where to find it so you can take on the challenge.

Before you can go and take on Swan in Fallout 4, you’ll need to know where this beast can be found. It doesn’t just spawn up anywhere, after all, but its location is pretty obvious given its name.

Where to Find Swan in Fallout 4

This great, hulking behemoth of the Commonwealth can be found in Swan’s Pond. This is right next to the Boston Common location that you can discover in Fallout 4, and can be spotted fairly easily. You’re looking out for a park-like area, with a little shelter building, and a large pond with Swan boats scattered about the place.

You can check out its location on the map compared to other named locations in the image below. You’re looking for the icon of a Swan (funnily enough) just northeast of Hubris Comics.

In order to find Swan in Fallout 4, you need to head to Swan’s Pond and walk right over to the water. Once you’ve got close enough, this behemoth will emerge from the water and the battle will begin.

How to Beat Swan Easily in Fallout 4

It’s worth first going over the different moves that this enemy is going to use against you in Fallout 4. We’ve listed these for you down below:

There’s a reason we’ve listed its moveset here, and that’s because you want to try and ideally limit Swan to just throwing rocks at you. That way, you’re significantly limit the amount of potential damage you’re going to take.

Ahead of entering into the battle, you’ll want to ensure you’ve done the following things:

Now that you’ve got everything ready to go, you’re all set to take on Swan in Fallout 4.

The best method we found to dealing damage and staying alive in this fight is to simply seek out cover from Swan that limits the moves it’s able to use on you.

For example, some players have found success with crouching behind the railing surrounding Swan Pond and using a Laser Pistol to slowly chip away at its health.

Meanwhile, others have stayed inside the nearby bus to protect themselves, while dealing damage out of the windows.

Essentially, you want to find any kind of cover, or narrow alleyway (of which there is a conveniently placed one by a rusted car just around the outskirts of Swan Pond) that your enemy’s enormous stature cannot get through.

Then, it’s simply a case of using your most powerful weapons to deal damage as quickly as possible. We found that two Mini Nukes with the Fat Man and a burst with the Minigun were enough to down Swan in Fallout 4 fairly quickly, you’ll just need to have the ammo to do so.

The Aim For the Legs Method

Swan is an absolute tank of an enemy that’ll chase you about fairly relentlessly. Fortunately, there’s a way to immobilize it, and that’s by crippling either one of its legs.

The best means of doing that is to use explosive weapons, or repeatedly pepper one limb with repeated fire.

If you can cripple the leg and have the notification appear in your top left corner, Swan will not be able to attack or defend. It’s a sitting duck… get it?! We’re sorry.

If you can cripple one of Swan’s legs in Fallout 4, the entire battle then simply becomes a case of firing at it as much as possible with your most powerful weapons until it drops.

Outside of that, there’s not a whole lot you need to know to beat Swan in Fallout 4 outside of simply upping your level.

For more tips, tricks, and guides while exploring the Commonwealth wasteland, be sure to check out our guides on Power Armor locations, how to find Dogmeat, how and where to get more ammo, how to get a jetpack and fly, as well as how to get ballistic weave, just to name a few.