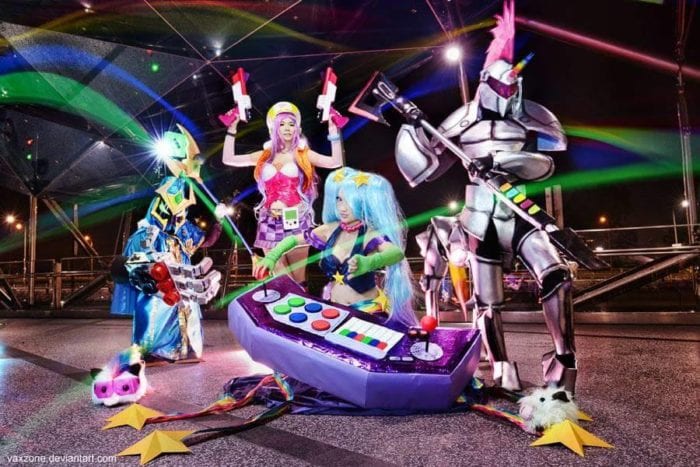 Allow me to take you on a trip down memory lane. When you were a child, arcades may have been a magical place of untold wonder and splendor. Flashing lights, noisy machines, fabulous prizes stretching as far as the eye could see. To your left, eight Daytona cabinets with polygonal graphics better than you had ever seen before, and to your right, a machine with several alligators popping their heads out, just waiting for you to pound them back into the depths.

A sense of whimsy and merriment filled the air, completely belying the lack of natural sunlight that obscured any perception of the time of day. Between X-Men, Street Fighter and at least five pinball machines, you didn’t know where to start. All you knew is that you had found your own gaming nirvana.

Not striking a chord with you? Perhaps you were born a little later — or earlier, in which case you could easily substitute the above games for Pac-Man and Galaga — and you view arcades in a different light. There are no lines forming in front of the cabinets, and indeed, there are very few classic arcade games to be found. In their place are photo machines and rows of sterile, soulless ticket machines.

Is this an arcade, or a casino for toddlers? The lines are blurred, and somewhere along the way, the shine has faded. You can take it from me, someone who has remarkably, impossibly, and lamentably been working in this industry for almost a decade now.

The arcade gig is a strange one, to be sure. You’re either quitting within a week, or stuck in it for a lifetime. The turnover is an oxymoron of fleeting casual positions and stagnant careers in equal parts. Your established staff members typically have a combined 50 plus years worth of experience, whether or not they intended for it to be that way, and they’ve seen it all. Grizzled, jaded veterans who have dealt with the ball jams and the error 4s and the faulty calibrations and approximately 3,000 Maximum Tune gear sticks.

The only things worse than this game are the people that play it.

One of the most common statements you’ll hear in arcades (aside from the weekly buffoon with 20 tickets who declares that they want the PS4) is “you must love your job,” a double-edged supposition that could easily be countered with “you must love making assumptions.”

Conceptually, an arcade is a fun place to work. Lots of games, interesting challenges to overcome, plenty of places to hide when you want to just mess around on your phone for 20 minutes. Peel away the thin veneer of opulence, however, and you will find a group of very tired, very stressed people who look at these games not as a source of joy, but as a series of potential problems and tasks.

I think back to my childhood, and the Ninja Turtles cabinet where one of the attack buttons wasn’t responding. Upon requesting assistance from the staff member, his reply was that I should “play something else,” walking away with a shrug.

It was the first chink in the armor, the earliest realization that people could view something as wonderful as Turtles in Time with such disdain. I miserably used up the rest of my credit, re-purposing Raphael into a gymnast as he sprang majestically over the heads of the oncoming Foot Soldiers. Needless to say, he did not last long.

In actuality, the fix was most likely an incredibly easy one. Open up the panel and reconnect the button. Their constant use sometimes makes the internal components come loose. If I could go back in time, I’d tell that pimply teenager to do his goddamn job.

This was, however, back in the 90s, when arcades were still riding high. In his defense, he probably had seven machines that were out of tickets, an unexpected birthday party that he had to source a host for, and a Diet Pepsi that had been spilled all over NBA Jam. Boom-sticky-licky!

By the time the millennium had rolled around, the industry took a fearsome blow that it would never quite recover from: online gaming.

Home consoles finally caught up with their gargantuan arcade counterparts, featuring graphical fidelity that was on par if not better, and the promise of a whole world of competition from the comfort of your living room. In Japan, arcades evolved through necessity, delivering unique and quirky experiences that were simply not available at home.

Overseas, however, the industry stumbled and flailed, falsely believing that bigger meant better. I’ve never met a water game that wasn’t a pain in the ass — combining electronics with water, who would have ever thought that was a good idea? — and virtual reality machines are almost exclusively overpriced, cumbersome and temperamental pieces of junk.

If you ever see the Xtrematic brand attached to a machine, you’d best take your money elsewhere. Or kick it really hard, because that’s all it’s good for.

Incidentally, kicking it is more fun than actually playing it.

It is an antiquated industry, but remarkably, it remains a fairly lucrative one. Ticketed games, once the supplementary feature of an arcade, have become the focal point, thanks to cheaply made, simplistic experiences that are built solely to suck money quickly from your pockets. The hard, fast rule is that the shorter and less fun a game is, the more tickets it will reward you with.

If it’s pulling in a lot of revenue in rapid succession, they want you to continue playing it; and you’ll be fast tracked to the prize of your dreams, whether it’s a soft toy or a fake moustache (wanna comb it?)

Within the last decade, things have changed wildly, to the point where even working in an arcade can feel like an automated experience. Digital tickets are the new norm, instantly loading onto your card and eliminating the need for the paper equivalent.

Those cards can be dispensed from automatic teller machines, and there are some clientele so adverse to human interaction that they will ask a staff member for change to use these machines, rather than buy a card from them directly.

Surely, working in an arcade is much the same as it is with any other industry, perceptions laced with the kind of cynicism and defeatist attitude that comes from years of experience. It just also comes equipped with a lot more flash and pizzazz, plus the hilarity of watching someone fail at Bishi Bashi.

Moving forward, things can probably dither along on this course unimpeded for years to come; so desperate are we as a populace for stimulation, we disregard the undeniable fact that the experience itself has taken a nosedive in quality.

How, then, has it captured me for so long, kept me in its stranglehold, forced me into servitude as the ‘old guard’ who knows his King of Hammer from his Nightmare Buster? It’s hard to say, really. It was supposed to be a temporary job that put me through college, but three degrees later, I’m still roaming those darkened hallways, no closer to a proper career now than I was all those years ago.

Pictured: One of the worst games I’ve ever dealt with.

Familiarity would be my first suggestion; when you get into the swing of things, you become very good at diagnosing and rectifying problems, and there is a certain satisfaction to that. Occasionally, I’ve wandered into other arcades and been able to spot at least three issues or possible scams I could run in the pursuit of freebies. Not because I particularly want anything, but because I can. As if I hold some semblance of personal ownership over the industry, and will exert my knowledge upon others.

Comfort would be next on my list. With all of the streamlining that has occurred, it has never been easier to work in an arcade. Time once spent frantically running from area to area as I tried to replenish empty ticket machines is instead spent actively searching for something to do.

As technicians, we long for the opportunity to do preventative maintenance, but the daily routine has become so mundane I vaguely consider breaking things just to see if I can fix them again.

Do these sound like logical actions? Not in the slightest, but perhaps it takes a certain kind of insanity to last in this industry. I’ve seen some good folks come and go, and a great many of them end up coming back. It’s vaguely Corleone-esque in that sense.

Ultimately, if you were to posit the question whether arcades as we knew them are dead, my immediate answer would be yes. You’ll no sooner find a classic House of the Dead cabinet than you would an actual zombie. What you will find, however, is a shameless Plants vs Zombies facsimile that will yield approximately two and a half tickets for $3 a pop.

The symbolism is rich, as it reflects the tired, shambling world of the modern arcade. It’s still there, sure, but it’s different, changed. Those ghoulish fiends on the screen, once hungry for brains, have begun targeting an even more precious commodity — the one in your wallet.

Hopefully you’ve got enough to keep them at bay.