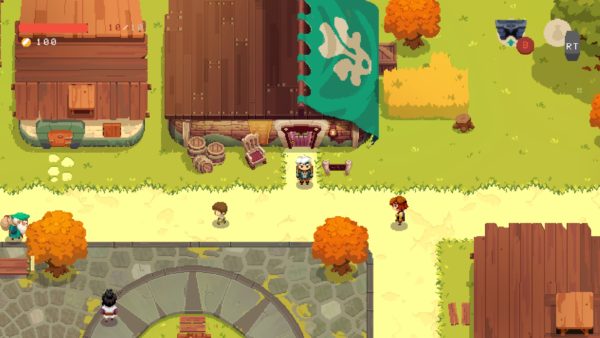 Too many RPGs are focused on grandiose stories and dreams of saving the world or becoming a legendary hero. In Moonlighter, your goal is to become rich, and that’s totally cool with me.

Developed by Digital Sun Games, Moonlighter is clearly inspired by Recettear, one of the more popular RPGs that center around dungeon-crawling and managing an item shop in the day to sell your hard earned loot. The premise is more or less the same in Moonlighter, and while the game felt a little light on content, we still very much enjoyed our time with it. This also seemed like another one of those “perfect Switch games,” as Moonlighter features some rogue-lite elements that make it suitable for portable play. Unfortunately, it isn’t without its flaws.

As we’ve discussed extensively in our official review of the game, Moonlighter is split into two halves. During the night, protagonist Will goes exploring in these procedurally generated dungeons in search of loot, all while fending off dangerous monsters and bosses. During the day, Will brings back his loot, and tries to decide the best price point for each item. Once you’ve got enough money, you can invest that into the other shops in town to get better gear and increase your stats.

For the most part, Moonlighter’s core gameplay loop remains just as compelling on the Switch as it was on PS4. The pixel art graphics look crisp and clean in handheld mode, text sizes are readable and acceptable. I was so sure that Moonlighter would quickly join the ranks of Dead Cells and Enter the Gungeon as my favorite Switch rogue-lites, but there are just a few too many issues standing in the way of that dream at the moment.

During my time with Moonlighter’s Switch port, I’ve encountered my fair share of bugs that mar an otherwise charming experience. For instance, whenever you’re equipped with a bow, the weapon recoil can knock Will back slightly. And if you’re standing in the wrong spot, you can get clipped out of bounds with no way to recover. Or, you could enter a bugged room where it’s impossible to kill a regular enemy, essentially soft-locking you in that room unless you die or restart.

These dungeon issues are certainly annoying, but not as much as the bug that prevents you from getting any money when you use Will’s magic mirror. The mirror is a handy little item that allows you to dump your loot in exchange for a bit of money. It won’t be as profitable as selling stuff at ideal price points in your item shop, but it’s still helpful when you need some quick cash. However, the Switch port contains a bug where if I try to sell my items to the mirror too quickly, it would eat my loot and not give me any money in return.

All of these bugs sound minor in isolation, but when combined, they prove to become a serious damper on the experience. It’s such a shame as well, because virtually everything else about the game is so wonderful.

Moonlighter boasts a simple, whimsical soundtrack, and the writing itself can be humorous at times. The combat, while simple, works well on its own, which makes it a great game to play on a portable device.

I wanted to love Moonlighter on Switch. I really did. It’s yet another great game for the platform because you can easily do a short dungeon run during a commute, and its pixel aesthetic is constantly inviting. At the moment, however, the Switch port just isn’t quite polished enough for it to warrant a full recommendation. Most of the issues I’ve listed here were present in other versions of the game as well, and they seem to have been fixed. I’ve little doubt that they’ll be addressed for the Switch as well, but until then, you might be better off looking elsewhere for your dreams of striking it rich.