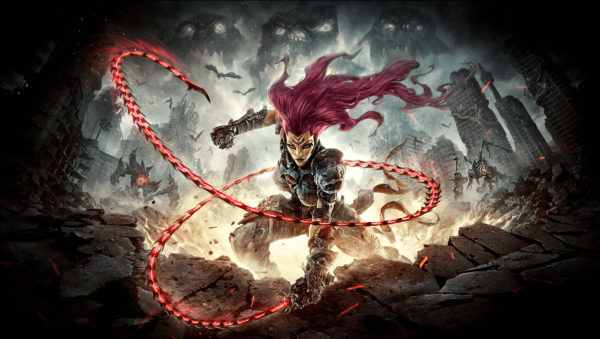 Sometimes, a game can have plenty of fun to offer buried beneath loads of minor annoyances and headaches. This is the case with Darksiders 3, which comes frustratingly close to realizing its potential only to have technical problems and a lack of polish mar the experience.

Set just after the false start of the apocalypse from the first game, Darksider’s 3’s story follows the horseman Fury as she is pulled into the conflict.

Enlisted by the Charred Council to hunt down the Seven Deadly Sins, she enters the battlefield expecting an easy task that will earn her honor and renown.

Shortly after arriving however, she is betrayed and left for dead, only to be rescued by the Lord of Hollows, an ancient being of immense powers.

He seeks to use Fury to restore balance to the universe and put an end to the premature war between Heaven and Hell, while also helping her uncover those who betrayed her.

With no other options, Fury accepts his offer, gaining the magical powers she’ll need to track down the Seven Deadly Sins and learn the true intentions behind her mission.

The story is on par with what fans of the first two Darksiders have come to expect. Full of fantasy and political intrigue, it provides just enough to keep the player guessing, and delivers some good curve balls here and there to spice things up.

That said, most will find themselves drawn in more by the gameplay. Like past entries in the series, Darksiders 3 takes elements from several other franchises like The Legend of Zelda and Metroid, and combines them into something that does justice to its sources.

Combat is fast and fluid, prioritizing dodging and evasion to keep the action flowing. While it can be hard to get a handle on at first, it’s endlessly entertaining once the timing clicks and Fury slides past enemy blows with ease, only to deliver her own devastating combos shortly after.

This fun is built upon by the array of weapons and abilities players can unlock along the way. Starting with only a barbed whip, players will unlock four more weapons to use alongside it as the story progresses ranging from a massive hammer to chilling blades.

Each new weapon comes with an elemental ability as well, giving the player special buffs they can pair with their weapons to unleash enhanced combos.

There are also some light RPG elements sprinkled in to help players take on the game’s increasingly difficult enemies. Though not as in-depth as some of the systems seen in Darksiders 2, they cover the basics like increasing stats, upgrading weapons and crafting better accessories for said weapons.

Outside of combat, the game tasks players with exploring areas and solving puzzles to progress further into areas and track down the Seven Deadly Sins.

This involves everything from platforming across pitfalls and solving block puzzles to some light Metroidvania-like backtracking.

Like the combat, these elements are done well enough that they’re always entertaining and never bog down the game. At worst, the world can feel a bit linear compared to today’s standards, but it is still serviceable and interesting to explore.

Unfortunately, Darksiders 3 is bogged down by glitches and performance issues that can frustrate frequently.

The game constantly stops to load new sections of an area, bringing everything to a screeching halt as often as every 15 minutes.

This usually doesn’t mess with the combat, though it becomes noticeable while moving between areas to solve puzzles and when you’re heading toward new objectives in the main story.

The issue is less pronounced on PlayStation 4 Pro versus a standard PlayStation 4, but the loading breaks still exist regardless and can quickly become a nuisance.

This is matched by both graphical and audio hiccups. At times, Darksiders 3 is noticeably rough around the edges with jagged outlines around characters, and environments matched by unloaded textures aplenty.

The problems are occasionally fixed by the frequent loading breaks, but more often than not the issue will persist through entire areas. This turns vistas into eyesores, and makes the game look and feel like a poorly made port at times.

The audio suffers similar issues. Though the audio itself is well done on the surface with strong vocal performances, satisfying sound effects and a perfectly used score, it frequently crackles or cuts in and out.

Most of the time this is caused by too many things going on on-screen at once, and fortunately it didn’t occur too often during important cut scenes or story moments. Still, it’s frequent enough to be a constant peeve.

Then, there’s the more serious issues. Though infrequent, Darksiders 3 can crash when players reach bigger areas for the first time. Again, these issues are less frequent on PS4 Pro, but can still occur.

The game autosaves enough that players won’t lose too much progress if this does happen, but it still shows some glaring issues in the game’s ability to run properly.

And yet, at its core, Darksiders 3 is a good game. Its combat and story do justice by the series, and even with its flaws it provides enough to keep longtime fans and newcomers alike invested.

So long as players can have some patience for the game’s technical issues, they’ll find plenty to enjoy in this title.