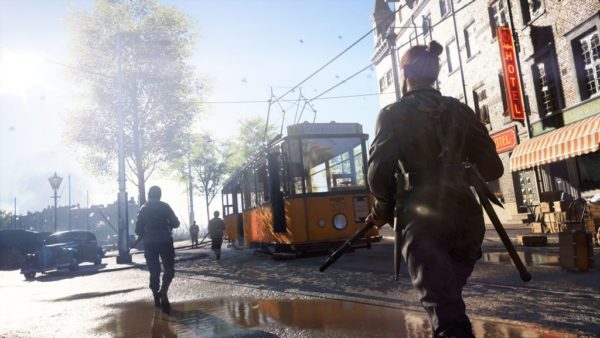 Following both Fortnite and Call of Duty in jumping on the battle royale band wagon, the next Battlefield game was revealed to be coming with a mode called Firestorm. Much like Black Ops 4’s Blackout, Battlefield V’s battle royale mode was to be incorporated into the package alongside the series’ other core modes. However, shortly before release, EA and Dice revealed that Firestorm was not due to release in Battlefield V until 2019.

Firestorm’s initial omission makes Battlefield V a slightly underwhelming package. As we said in our review, Battlefield V is “impressive and immersive,” but it’s not a finished product in its current format.

The large scale battles that we’ve come to know and love from the series return, of course, and the gameplay and level design are as solid and engaging as they’ve ever been. There’s just not a whole lot that’s exciting and new. There’s little to make people sit up and take notice or tear them away from the other shooters that do.

Battlefield V’s single-player also doesn’t match the quality of Battlefield 1’s. The bite size War Stories are a great idea that offer the possibility for varied gameplay and interesting stories to be told, but some missteps have been made with the new ones.

The three War Stories on offer in Battlefield V left us feeling “disappointed and underwhelmed,” with the variety of Battlefield 1’s campaign being lost for the most part in V’s. Also at just three hours long, and with a fourth War Story being another element that’s delayed, the single-player feels a little like an afterthought.

It’s far from enough to counter the lack of a battle royale mode out of the box, and it justifies Call of Duty’s decision to ditch one in favor of focusing on Blackout.

When the news leaked that Black Ops 4 would launch with a battle royale mode instead of a single-player mode, a lot of fans of both Call of Duty and other battle royale games were skeptical.

While the move away from a traditional single-player mode was a shock for some – primarily those that picked the series up every year for that reason alone – it wouldn’t have been a concern for most Call of Duty fans. After all, according to trophies on PS4, just 25.5% of people who picked up WWII completed the campaign.

There was more concern about how Blackout would work.

How well would the series’ signature fast paced action work in the slower battle royale format? Would people move away from the traditional multiplayer and Zombies modes? Well, Treyarch were proven right. Blackout is not only a great battle royale experience, but it found an audience and it’s stayed popular even with the likes of Red Dead Redemption 2 launching just weeks later.

Battlefield V could have done with this type of boost. Firestorm is something that would make people take notice of the game. As it stands, we all know what to expect from Battlefield V, and the Blackout fans are probably going to stay where they are.

Firestorm’s March 2019 release is also highly unlikely to have the same impact that it would have had if it had been ready for launch day. It’s going to be free to all BFV owners and, of course, we don’t know how DICE will handle its launch yet, but it’s never going to grab attention in the same way with many Battlefield V players putting the game down before then.

If the eventual release of Firestorm is treated like a new game release, with all the fanfare and promotion of the base game, it could be enough to bring a lot of players back, even those that weren’t going to return for curiosity’s sake.

The mode also needs to have enough about it to stand out from not only other battle royale games but Battlefield V’s already expansive action. There needs to be more to it than the standard 64 player matchups in a different format. There needs to be something in the way of set pieces or map features that make it feel different to play, without losing the feel of Battlefield’s shooting.

Much of Firestorm’s success will still be down to how it is released and what format it is in come March. However, it could have been the star of Battlefield V out of the gate, not only increasing its own chances but making Battlefield a more attractive experience at the same time.

What Battlefield V offers is still a lot of fun, especially the online multiplayer, but the delay of Firestorm makes it less exciting and puts it behind the fall 2018 first-person shooter competition.