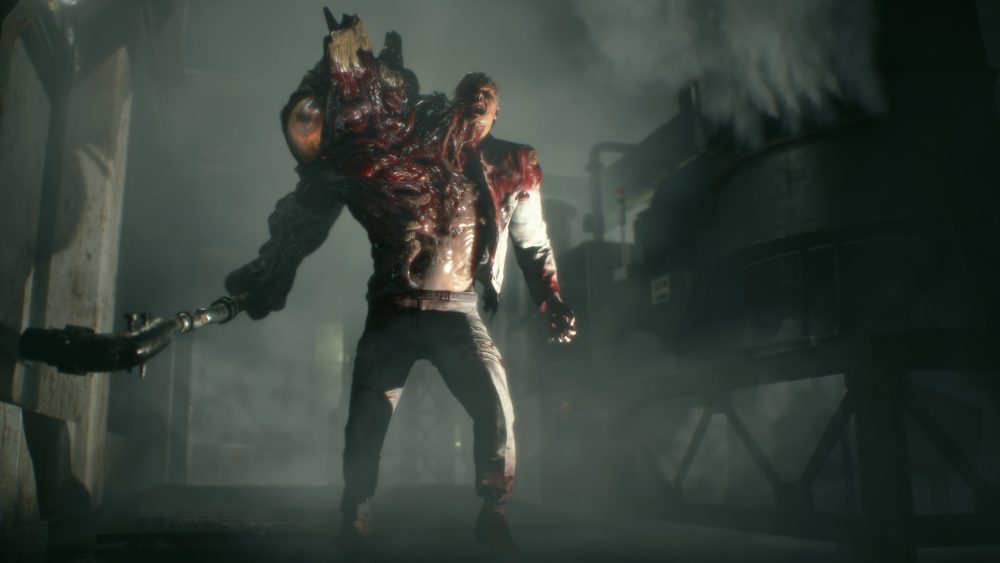 Several months ago, our Reviews Editor Zhiqing Wan attended E3 (I’m jealous) and played the Resident Evil 2 demo. She got to experience 15 minutes of zombies heaven —or hell, depending on your point of view. However, the demo was limited to just wandering around the Raccoon City Police Department as Leon Kennedy. Capcom managed to put together another demo for New York Comic Con, and I found myself satisfactorily scared.

Now, I didn’t just play the new demo at NYCC. Capcom also included the E3 demo, and I tried it first. Basically, everything Zhiqing mentioned in her article applies to what I experienced. The atmosphere was absolutely terrifying (amped up by the oversized headphones), but I managed to keep my cool and headshot most enemies. I am not ashamed to admit I ran once or twice but only so I could funnel the zombies into a chokepoint and make them easier to shoot than zombified fish in a barrel. It was a fun experience that felt like an interactive house of horrors, but that was the E3 demo; the NYCC demo was a whole new kettle of fish. Great. Now I’m hungry.

For the new demo, I stepped into the shoes of Claire Redfield. And let me tell you, the demo did a good job of throwing me for a loop. I was handed 15 handgun bullets, a submachine gun clip of 24 rounds, a green herb, and three explosive mortars. And a handgun, a submachine gun, and a potable mortar cannon. After searching around the game world, I found a grenade and enough materials to create some acid rounds. I felt like I could handle anything, but then the demo’s dark secret reared its ugly head. As soon as I saw the little girl, I knew what was about to happen. I was about to go face to shoulder-eye with Resident Evil’s most iconic boss: G-Birkin.

Now, this may come as a surprise to you, but I’ve never played the original Resident Evil 2. I’ve researched the hell out of it and the franchise in general, though. I am addicted to Resident Evil’s backstory and lore. I can name each of the T-Virus Tyrants by heart and know the key features of each of the different viruses. I am no stranger to G-Birkin or his many forms, but that didn’t stop me from having zero freaking clue how to beat the boss. Do I aim for the head or the eye? How do I even hit the eye when it’s swinging around on that shoulder that keeps hitting me over the head with a steel pipe? I panicked every step of the way and loved it.

So, you may wonder how I beat G-Birkin. To put it simply, I didn’t. I shot him in the head (and the giant eye) multiple times, and he still came at me. I pumped him full of submachine gun rounds, and he didn’t even flinch. I even hit him point blank with three incendiary mortars and two acid mortars. That should have been enough to take down five rampaging elephants. Guess what? He barely slowed down, third-degree burns and all, and he didn’t even notice that one time I stuck a knife in his head. I spent half the fight running around like a headless chicken.

I ran around scared out of my mind, wondering how I was going to fight this creature without any firearms and with my knife still lodged in his brain. Luckily, the arena was a great big circle that let me run around and pick up some ammo, but it didn’t do me any good since he eventually killed me. Second time around, I thought I could be a little more conservative with my shots, maybe run around at the beginning of the fight to pick up extra ammo. No such luck. He still soaked up my ammo like an evil mutant Mr. Clean, and I still had to run away from certain death. But, right before G-Birkin was about to deliver the killing blow, the demo’s timer ran out. Never have I been so relieved to see a Game Over screen.

Now, I know I was doing something wrong during the fight. Maybe I was supposed to kite G-Birkin around and bide my time (a tactic that isn’t exactly viable when you only have 15 minutes). Maybe the fight would have been easier had I gone in with more ammo. Who knows? All I know for sure is that I loved the fight even though it batted me around like a sentient piñata.

Had a Resident Evil veteran fought against this version of G-Birkin, I have no idea if he or she would have fared any better. This boss fight was unlike any I’ve ever encountered and left me both frightened and excited for the release of Resident Evil 2. I can’t wait to pay G-Birkin back in the real game for all the pain he caused me in the demo.