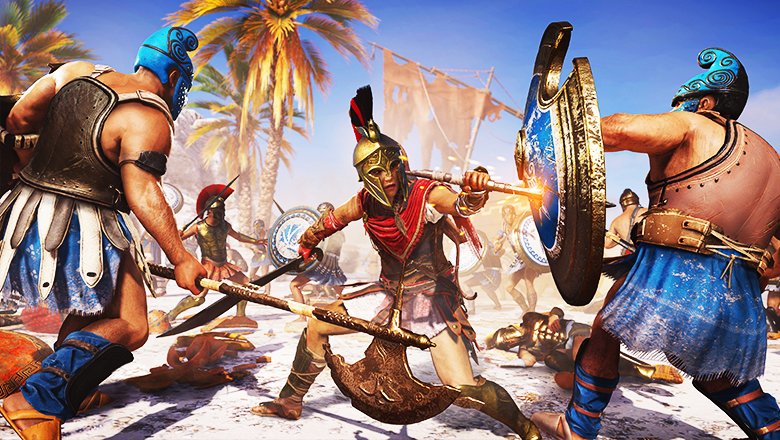 I’m crouched in an Athenian encampment, hiding beside the entrance to a corridor. An enemy guard approaches. I’m trying to remain discreet but I’m sure he’ll walk around the corner and blow my cover. Spotting that there’s no roof over my head I hop over the archway just as he turns the corner, leap into position behind him and execute a stealth takedown. It’s fluid, cinematic, and Assassin’s Creed Odyssey is making me feel pretty badass.

The minuscule amount of XP for my efforts triggers a level up, and as the soundbite confirms my new ability points I’m suddenly reminded this is an RPG, not an action game.

Hell, BioWare’s Dragon Age Inquisition had players excited for finally including a jump button, and that was in 2014. Even The Witcher 3, often considered a darling of cutting edge open world RPG design, feels vague and imprecise in the most simple platforming maneuvers.

Assassin’s Creed Odyssey is different. It’s absolutely placed to compete in the same market as games like The Witcher 3, but it’s been designed in reverse. Rather than being a series rooted in old-fashioned RPG design, modernized to feel better suited to the expectation of the contemporary gamer, it’s the opposite. Assassin’s Creed is an action series with a game engine designed to accommodate parkour that’s been retrofitted with RPG systems.

Origins was the halfway house last year, but Odyssey is now a full-on role-playing experience. Yet it feels every bit the visceral, streamlined action game that belies our expectation of games of that ilk. All the free running and parkour lineage is on display, but the progression systems, special abilities, armor and weapon scaling, and all the RPG mechanics you’d expect to see are there for players to engage with.

Annoyingly, though, combat is still an issue, despite the series’ overhaul with Origins last year. It’s ironic I’m complaining about an issue that plagued the series for years, was completely revamped for the better, and now once again feels like the weak link in Odyssey. Clearly, Ubisoft has gone for action-RPG combat of something akin to the Dark Souls series. Combat is more punishing now, a balance of attack and dodge mechanics with special abilities breaking up the monotony of light and heavy strikes.

It’s hardly inventive or unique, but that’s not my issue with it. I find the hitboxes all over the place, the animations often a little janky, and generally a sense of disconnect between what I’m pressing and what happens on screen. It’s nothing game-breaking, don’t get me wrong, it’s just a little… vague.

It’s a shame because everything else about Assassin’s Creed Odyssey feels so fluid. Parkour you’d expect from a game that’s always incorporated free-running into its design, but other aspects to movement, such as horse riding, naval combat, swimming all feel equally splendid.

Why, then, is Ubisoft not able to nail down the combat in Odyssey to something that’s as equally compelling? I suppose you could point to games like Skyrim and The Witcher 3 as having mediocre combat. You’d be right, too. But we’ve already established that Odyssey’s roots lie much closer to action games. I’d have hoped for combat as engaging as something like Middle Earth: Shadow of Mordor or God of War.

Even after the second iteration of what is a total series revamp we’re still not quite there. In fact, I’d argue it’s a slight regression from Origins in terms of how it feels out the box. Sure, Odyssey is great once you’ve unlocked five abilities, but before then it’s rather tedious. The first conquest battle I did with just two attacks and a ranged ability was laughably clunky: shield break, attack, run around being chased by two enemies, repeat. Yes, it gets better 15 hours into the game, but that’s an awfully long time to wait, and the added abilities never solve the inherent issues that I’ve previously mentioned.

In the end, the combat takes the gloss off a gameplay experience that is otherwise extremely gratifying. The way Assassin’s Creed games make exploration and discovery, which is such a huge appeal of open world games, continues to impress a decade after the original game moved the goal posts all those years ago. It’s still the genre leader in that respect. And now there’s all the systems, progression, and story I want from an open world game. I just wish the combat would hurry up and rise to the same standard.