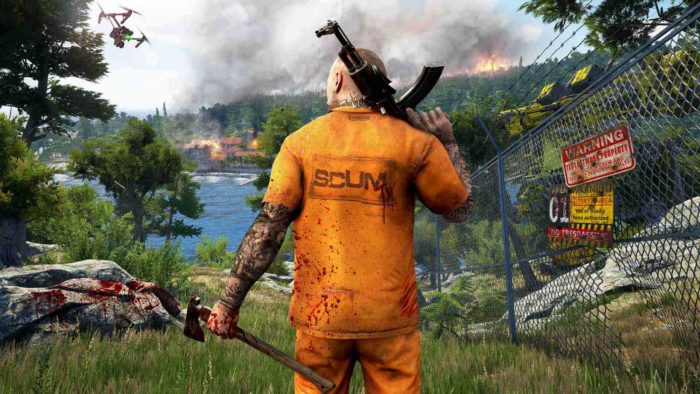 DayZ, H1Z1, Rust, ARK: Survival Evolved: These are all games from the relatively new survival genre. They all have their similarities, but each one does a decent job of incorporating fresh concepts that make them stand out. SCUM, a game which is currently in early access, is the latest contender in the genre. While it does stick very closely to the tropes established by those before it, it definitely has a few interesting features that warrant at least a look from fans of the genre.

SCUM doesn’t stray too far from its inspiration. The framing device is pretty neat; you play as a prisoner who has been thrown into a grand arena and must fight for survival. The twist is that, in Hunger Games style, the whole thing is being broadcast to television. It’s a cool setup that you’ll occasionally be reminded of, with the random drones that are flying around, but it doesn’t play into the gameplay much as of right now. One small tie-in is with the game’s fame system. A certain level of fame is rewarded for performing most actions (it may relate to how you’re perceived by the viewers or something), but it is currently only used for respawning your character. Establishing a more direct link between the gameplay and the narrative in the future would certainly be nice.

But the main reason most people pick up survival games is for the gameplay, and SCUM has everything that a good survival game needs. Most of your time will be spent pilfering abandoned villages, securing compounds and so forth for food, tools, and weapons to fend off hostile players or NPC puppets (SCUM’s version of zombies). It all works pretty great, especially the inventory system. Different clothing and accessories will allow for more inventory slots, and different items will take up varying amounts of slots. Just sorting your inventory is a puzzle in itself, and is very reminiscent of the system in Resident Evil 4. Being decked out in a full set of clothes, allowing you to carry lots of food, tools, and maybe a weapon or two, is perhaps the most satisfying thing in SCUM.

The main area where SCUM stands out is the metabolism system. If you thought the crafting tab in the menu was complicated, just wait until you cycle to the metabolism tab. I don’t think I’ve ever seen so many stats on a single screen before —there are over 100 different stats, from your different vitamin and mineral levels to your stomach and intestine volume. Seriously, it’s wild. The good news is, you don’t have to pay attention to everything. In fact, a majority of that screen can be ignored. You only really have to keep track of the BCU Digestion Monitor section which is conveniently placed in the lower right. This will let you know when it’s time to eat, drink, pee, or poop (and yes, peeing and pooping is a vital part of the gameplay). The meticulous nature of the metabolism stats is helpful for those who want their character to have a balanced diet, but for those who don’t need that level of immersion, it’s totally fine to ignore the majority of it.

Another area of SCUM that the developer, Gamepires, stressed was unique, is its melee combat. It’s serviceable but nothing to write home about. It takes a very long time to get a working artillery weapon, so you’re going to have to make do with wooden spears, melee weapons, or your own fists in the beginning. Close-quarters fights just seemed to result in me constantly backing off, letting my opponent miss me, and then throwing in a swing myself. Ranged weapons, on the other hand, fare much better and control about as good as any PC shooter can. The game gives you the option to toggle between third-person and first-person perspectives on the fly, which is always a welcome option.

Perhaps the most exciting, unique feature of SCUM is the robot-controlled compounds. These contain the best loot on the map and are likely your destination once you’ve gathered all of your basic resources. For me, these compounds are the highlight of the game. Some robots will at least tell you to get lost before they start shooting, while others are way more hostile. Two or three bullets can kill you in this game, and you can’t take down the robots with your weapons, so it turns into a stealth game. Having a friend take damage while you’re both infiltrating a compound is a pretty scary experience —especially when they aren’t equipped with rags to patch their wounds. That scramble can become super intense and very fun, epitomizing the thrill of the survival genre.

Gamepires has laid down the foundation for a pretty solid survival game, but it definitely feels like a game in early access. It has some bugs that you’d expect from an early access game, but they’re not too bothersome. What is bothersome is how hard it is to get into a game with a friend. There is an option to join a friend’s match by typing in their server’s IP address, but the address isn’t currently viewable in-game and requires a cumbersome workaround. Even after doing that, don’t think that you’re going to spawn close to your friend. The map is huge, and with no vehicles in the game, you’re going to have to walk your butt all the way over to your buddy. The map is a 4×4 grid, and spawning just two squares away could mean a 30-minute trek. SCUM definitely needs a better way of joining up with friends before it’s ready for its full release.

The most fun I had with SCUM is just learning how the game works: when to hold on to something or drop it, how best to use clothes, and how to best take advantage of the crafting system. It has a large, fascinating world that is enjoyable to explore. However, at the moment, it is just a survival game. Once you’ve spent a few hours getting the best gear, all that there is left to do is keep salvaging for food or to help or hinder other players that are weaker than you. For some people, this may be exactly what they’re looking for, but others may need more of an incentive to carry on playing or a goal to aim for.

Luckily, what Gamepires has planned for version 1.0 looks to deliver just that. Primary and secondary missions, side quests, and end game content are all planned for the game’s full release. Hopefully, this content will further link SCUM’s story elements to its gameplay, while at the same time give player’s a little more to aim for while they’re surviving. Other promising features planned for 1.0 are functional vehicles and an advanced combat system that will incorporate martial arts. With all of these added features, SCUM could very much improve the few issues that I do have with the game and could change it from a pretty good game to a great one.

SCUM is a game in early access, yet, despite some areas lacking a bit of polish, it could honestly stand as a full release in its current state. What we currently have is a very competent survival game with some good, unique ideas. However, it’s exciting that version 1.0 of SCUM won’t just bring technical and quality of life improvements, but also brand new features that are sure to make it a better experience overall. If you’re just looking for a good survival game, then by all means, pick up SCUM today and survive away. But if you’re looking for something with a bit more meat on its bones, you may want to hold off until the full release, whenever that may be.