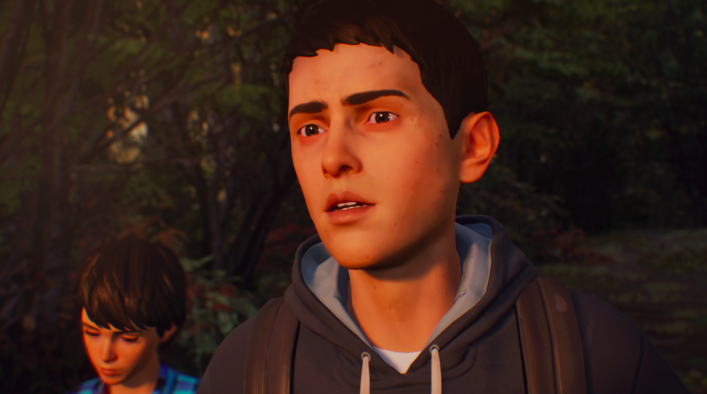 While the original Life is Strange put me in the shoes of a queer Max Caulfield, that was pretty much the only thing that her and I had in common. As much as Life is Strange means to me in terms of the storytelling, decision-making, and its hella good soundtrack, I could never truly relate to Max and Chloe. But as for someone who has a younger sibling, comes from a Latin background, and has technically “lost” his father, I relate so much to Sean in Life is Strange 2, so much that it hurts.

I constantly cried while playing through the first episode, not necessarily because it was depressing or melancholy, but because I put myself in Sean’s shoes for the entirety of the experience, and if it was me who had to endure losing a father while also protecting my little brother from the outside world and the truth, I would be a complete wreck.

Instead of focusing on a queer relationship in what was a very white cast in a rich west coast academy, Life is Strange 2 strips all of that away and puts two Hispanic siblings together who must face adversity in Trump’s America, which is referenced in the game multiple times.

The race card might be thrown at the character’s a little too hard at times, but it’s necessary for people who don’t understand what it’s like to be non-white in a world such as this one. I truly appreciate Dontnod for doing something different by diving deep into these issues.

For those that have not jumped into Life is Strange 2 just yet, the story revolves around 19-year-old Sean and 9-year-old Daniel who end up in a sticky situation outside of their Seattle home that involves their father getting killed by an inexperienced and trigger-happy police officer. Younger brother Daniel realizing what has happened, mysteriously obtains supernatural powers that allow him to essentially shoot out a force field type power letting him levitate objects and push things away from him, destroying everything around him.

Confused and afraid, Sean decides that the only viable option for him and his brother is to flee the crime scene and make their way down the west coast, with their dad’s hometown of Puerto Lobos the main goal. Note that Puerto Lobos is in Mexico, which means that these two are in for a hell of a ride if they plan on making that 1500+ mile trek across the country.

Even though this is simply the first of five episodes for Life is Strange Season 2, I believe that we will get even deeper into the politically charged narrative that Dontnod has introduced us to in the opening hours. After spending my game time being called a spic, a reason for Trump’s wall to come to fruition, and a thug (all by the same person mind you), I immediately realized what Dontnod is doing this time around and I love it. Video games don’t always address the issues that are actually happening in the real world because they’re usually caught up in their own game world’s bubble. Games are usually there to be an escape from our own world.

Life is Strange 2 is making me feel for their characters once again, but in a different way. I’m no longer yelling at my television screen, yearning for Max and Chloe to have their first girl-on-girl kiss, but instead, hoping and wishing that Sean can protect Daniel from racists and stereotyping, something that I’ve definitely encountered in my life. I want Daniel and Sean to be okay and to make it to Mexico and hopefully live a happy ol’ life even without their parents by their side, but this is Life Is Strange, and if we learned anything from the ending of the first game, there are no happy endings in stories like this. But one can hope, right?