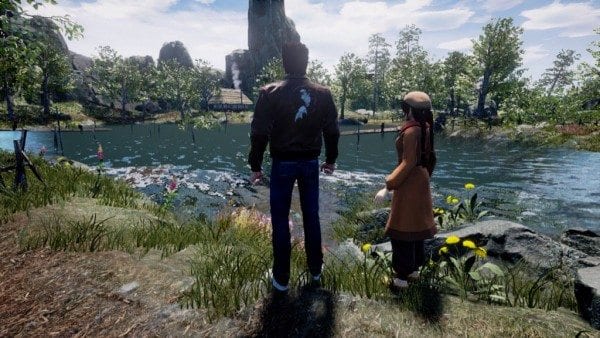 With the announcement of its release date, Shenmue 3 is finally starting to feel real, and we’re absolutely stoked about the prospect of finally resolving Ryo’s story on Aug. 27 next year.

It’s going to be absolutely fascinating to see just the developers will adapt Shenmue’s gameplay to feel modern and relevant in 2018. Apart from relieving nostalgia, if the recent Shenmue remastered have taught us anything, it’s that they certainly do feel dated. How will Shenmue 3 iterate on the formula while still keeping itself rooted in the past in such a way that it actually feels connected to the first two games? Perhaps the developers have looked towards the Yakuza series for inspiration after Sega has found so much success recently with what is, after all, perhaps the most comparable IP to Shenmue.

Along with the release date, we did get to see some more action via a new story trailer, which further teased the narrative direction of the upcoming game. We’re intrigued and excited, of course, but itching for some gameplay.

Devil May Cry is back in style with Devil May Cry 5, and it looks as though Capcom are set to continue their recent purple patch of hot new games. The game looked stylish, slick, and super fast-paced in the latest trailer, and we even got a release date.

Perhaps the most promising aspect about the game based on what we saw at Gamescom was just how faithfully it manages to capture that classic Devil May Cry feel. The series has gone on a bit of roller coaster ride over the years, and the newly introduced features and narrative form of the DmC spin-off were a little hit and miss. Devil May Cry 5, though, seems as though it’s incorporating the more interesting ones, such as moving environments, while sticking firmly to classic Devil May Cry elsewhere.

“What they did with DmC, that art style, those animations, that is real style, you know? So we took a lot of what we learned from that… Even stuff like the kill cams, for instance, we took a lot of that and having learned that we tried to implement that in this game as well.

“Another thing is, we have a lot of friends who love DmC. For me, DmC is one of my favorite DMC games, if not my favorite. And we wanted to make the game in a way that people who enjoyed that game will enjoy the way it controls just as much as they enjoyed DmC.’

Not too much is known about the story, though a recent interview confirmed that it does take place after Devil May Cry 2. Nero has set up his own demon hunting agency based out of a van adorned with a neon “Devil May Cry” sign given to him by Dante. Nero has a new robotic hand called “Devil Breaker”, which was created by the new agency’s engineer Nico as a replacement for Nero’s Devil Bringer arm, after it had been severed off by a mysterious figure.

Elsewhere, we know that you’ll be able to play as three characters in the game, including Dante, and Nero. The third hasn’t yet been revealed.

First announced at E3 2018, Sekiro Shadows Die Twice had a substantial proper gameplay reveal at Gamescom 2018, and it’s much further along than anybody could have imagined. FromSoftware announced the game will be hitting store shelves next year, March 22.

Over 10 minutes of gameplay was showcased at the event, and several publications went hands-on with the game. We’re now finally able to see to just how FromSoftware is iterating on the familiar combat of its seminal Dark Souls series, and what mechanics it weaves into its DNA and which it discards. Clearly, there are similarities, and the lineage of Dark Souls is evident in the deliberate, weight melee combat and lock-on camera mechanic. It’s also punishingly hard and has a unique death mechanic in the same vein as the souls recovery from the Souls series. But that’s about as far as it goes. Traversal, stealth, and significantly faster-paced combat mean Sekiro is a markedly different sort of experience.

Souls games have always featured verticality and clever level design, but the promise of the grappling hook, which allows players to shoot around the map instantly and assassinate enemies in a single swipe, is a whole new level of traversal. There’s proper jumping here, too, and the ability to crouch and hide for stealth takedowns.

You’ve probably noted for yourself just how quickly enemies can be taken down in Sekiro, either by one-hit takedowns or lightning-fast sword strikes. It seems to us that although there’s plenty of flashy action, you’re still extremely vulnerable to attacks from enemies, which makes for a cinematic but highly strategic experience. It looks as though you’re going to need to pick your battles and pull off attack sequences with deadly accuracy, as well as choosing wisely whether to resurrect yourself after defeat.

After Gamescom 2018, Sekiro Shadows Die Twice has shot right up our list of most anticipated games in 2019.

While it technically isn’t a new game announcement, the full story reveal trailer for Life is Strange 2 has us hugely excited. For the first time, it confirmed that Sean and Daniel Diaz, first revealed in The Awesome Adventures of Captain Spirit, are the main protagonists for Dontnod Entertainment’s latest narrative-driven adventure, and we got to see a great tone piece that tees up the game’s plot.

The first entry in the episodic series is to release on Sept. 27 and will feature a completely new story set within the same universe as the critically acclaimed first game. It’s a brave move from Dontnod to completely abandon an already established plot and characters, and we’re keen to see how the developers manage to tie in the sorts of realistic themes like romance and drama to a plot-line that’s been described as similar to the film The Road. Still, we can’t wait to see how Sean and Daniel’s journey to Mexico unfolds, and how the two manage to cope with handling the superpowers they’ve inherited.

Quantic Dream might be the masters of AAA story-driven adventure games, but Supermassive Games gave them a serious run for their money with Until Dawn back in 2016. The gripping thriller was like an interactive 90s teen-slasher film, except here the acting was actually pretty decent thanks to some stellar performance from some big-name talent. The story was engaging, too, especially since we’re able to steer our main protagonists out of that obvious danger they always seem to walk into in the movies. Well, most of the time…

The Dark Pictures Anthology: Man of Medan is Supermassive’s next project, and it serves as a spiritual successor to Until Dawn. The announcement trailer revealed at Gamescom 2018 revealed a deeply atmospheric and spooky tale. Expect more of the same branching-narrative genius that made Until Dawn’s butterfly effect so brilliant, whereby any character can die at any time as a result of your decisions. We can’t wait to be scared out of our wits and make all the wrong decisions!