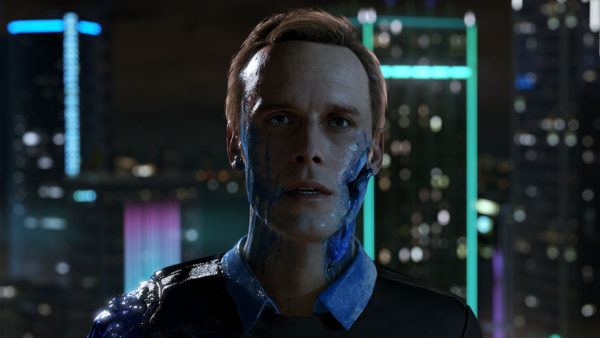 Quantic Dream’s latest game marks a big return to form for the studio, and it’s absolutely one PS4’s best exclusives this year. Detroit: Become Human is a thrilling tale of bravery in the face of oppression, and it’s perhaps the high watermark for writer David Cage, representing arguably his best work to date. The manner in which each independent story weaves together throughout the narrative and then collides in a gripping crescendo really is superb. The characters are interesting across the board, too, and there are some standout acting performances from characters, such as Connor, the android detective.

What we loved in particular about Detroit was the way in which the nature of the story created conflict, both between the player and character, and the characters themselves. Connor was fascinating to play, but having him hunt Kara was part suspenseful, part painful. And the banter between Connor and his partner Hank was playful, but it also did well to highlight human sentiment towards androids. Observing his bond strengthen with Connor and slowly abandon his prejudices was among the most interesting subplots in the story.

Even if you’re not typically a fan of story-driven adventure games, we urge you to try Detroit: Become Human.

Yakuza 6: The Song of Life

The Yakuza series has long been attracting a community of players who appreciate its off the wall flavor, and Yakuza 6: The Song of Life really streamlines a beloved gameplay formula into a super package.

It is the way in which every segmented aspect of Yakuza 6’s design comes together to produce a really compelling overall experience that makes it such a brilliant game. There’s the engaging story to rival the industry’s best narrative adventure games, scintillating beat em’ up action, and an awesomely detailed open-world to explore. Not to mention, the hours one can spend enjoying a myriad of awesome mini-games games that are genuinely really entertaining. Oh, and if all else fails, you can just go and befriend some cats…

From the sublime to the downright mad, there really isn’t anything quite like the Yakuza series out there, and what might seem on the surface like a whimsical crime story is actually so much deeper.

Octopath Traveler immediately piqued our interest as soon as we laid our eyes on that gorgeous aesthetic, and thankfully, the gameplay and story turned out to be just as compelling. Seriously, those graphics, though… Called HD-2D, pixelated sprites combine with polygonal textures to produce something truly unique and special. It’s a nod to the golden SNES era of JRPGs, of course, but there’s much more to enjoy than just gawking at the design.

Octopath Traveler’s narrative and design premise is as unique as its aesthetic: eight individual stories play out simultaneously, all independent from each other. At times, it’s a little disjointed, but we loved having so many characters with stories that we could delve into so deeply. Speaking of which, the world of Octopath Traveler is superbly detailed on the whole, and it really is the type of JRPG in which you’ll find yourself endlessly talking to NPCs to really soak everything up.

A JRPG wouldn’t be anything without a solid battle system, and Octopath Traveler delivers here, too. Random enemy encounters trigger active time battles in quintessential 90’s JRPG fashion, but there are some interesting fresh mechanics that really give it a neat point of difference.

The sequel to Level5’s Ni No Kuni: Wrath of the White Witch was hotly anticipated, and for good reason —the original game was one of the most charming and inventive spins of the JRPG genre in years when it launched back in 2013. Fast forward to 2018 and we were presented with something completely different but every bit as wonderful.

Revenant Kingdom tells a completely new story, it ditches the Pokemon-like familiar collecting and turn-based battle system of the old game, adds new layers of exciting new mechanics that totally reinvent the franchise. Such a big departure from proven success was a big gamble, but one that ultimately paid off. Ni No Kuni 2 has some of the most engaging combat we’ve played this year, and it feels even better with a new difficulty setting recently added. In our review of the game, we also noted our enthusiasm for the addictive kingdom-building mini-game, and we had fun playing the RTS army battles, too.

There’s such a depth of content to enjoy that Ni No Kuni 2 is one experience that’ll have you locked in for tens of hours. Good thing, too, as we’re still patiently waiting for that DLC…

God of War surpassed our expectations with its combination of storytelling, world-building, brilliant combat, and a cinematic presentation that pushes video game production to new heights. The return of Kratos marks a new era for God of War, modernizing the series with a new focus not only on narrative but the gameplay, too. The writing and acting performances added new depth and gravitas to the experience, while the over-the-shoulder perspective and clever camera work made God of War feel all the more visceral and intense.

Elsewhere, the overhaul to combat and the emphasis on RPG systems gave God of War’s traditional hack-and-slash action a more measured, Souls-like flavor that demanded a level of precision and strategy. Some of the systems were perhaps a little bloated, as we noted in our own impressions of the game, but the shift towards a more involved gameplay experience was appreciated on the whole.

You simply can’t miss out on God of War, and we wouldn’t at all be surprised to see the game sweep the accolades at this year’s Game of the Year awards.