It should have been super obvious from the title before you clicked in, but just in case, MASSIVE SPOILER WARNING for the first three seasons of Telltale’s The Walking Dead, ahoy. If you haven’t yet played them and plan on doing so, you may wish to skip this article until a later date.

While leading up to episode 3 there were plenty of stressful moments, and tough choices to make, the death of these two are the first real heart-wrenching moments of what would be many in the now long-running Telltale Walking Dead series.

While by design, your relationship with Kenny is constantly up and down, Duck and Katjaa were completely innocent and it was pretty much impossible to dislike them. Sure Duck was a little irritating at first, but by the start of episode 3, you get a sense of how endearing he is, and it’s cute how he and Clementine become such close friends. Meanwhile Katjaa, up until the death of Duck, was a steady, calming presence.

However, when Duck is bitten in the events of episode 3 everything changes for the group. Duck, of course, has his fate sealed, but Kenny and Katjaa are devastated by the news. Whether you kill Duck yourself or have Kenny do it, it’s a tough scene to take. Kenny is completely broken and is cold to all but the most loyal Lee players, and Katjaa can’t bear the pain and ends her life.

Season 1: The Boy in the Attic

Kenny can’t catch a break. Not too long after having to watch his wife and his son die, he and Lee come across a starved zombie child locked in an attic. He, like Duck, Katjaa, and so many in the aftermath of the walker outbreak, was helpless, and innocent, but those types are people are likely the ones most vulnerable sadly.

The boy reminds Kenny of Duck and it hits him hard. Lee then has to decide to either put the child out of misery himself or ask Kenny to take care of it. If you killed Duck for Kenny, having Kenny get some closure by at least being able to end this child’s suffering seemed like the right thing to do. 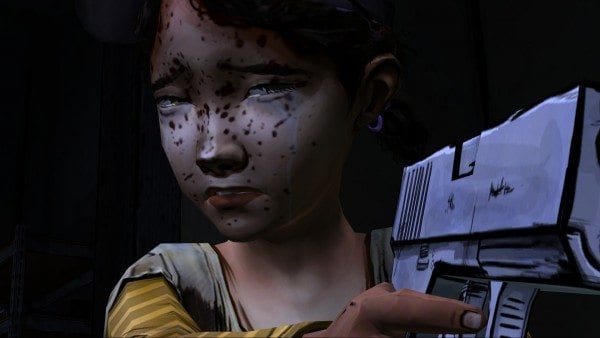 I mean, this is probably the toughest moment in the entire series, right? If the first season of The Walking Dead wasn’t worthy of all those GOTY awards it won to this point, the arc leading up t Lee’s death is probably the moment that sealed the deal for many critics and fans.

Things are starting to look somewhat up for Lee by the end of episode 4, that is until of course, he is bitten by a stray walker and finds out that Clementine has gone missing. Episode 5 is one big long quest to locate and save Clementine before the disease brings Lee down. Lee fights and gives everything he has to save Clementine and give her the opportunity to live.

Finally, we’re left with Lee, Clementine, and a gun. Lee had been preparing Clementine to survive in this new world the entire season, and whether she proves it by killing Lee before he turns, or learning the hard way by allowing Lee to turn into a walker, she definitely gets the message. Watching their tearful goodbye was undoubtedly the hardest, and most heart-wrenching moment to watch in any season of Telltale’s The Walking Dead.

Season 2: Clementine and the Dog

Honestly, Clementine’s entire opening sequence in season 2 of Telltale’s The Walking Dead was pretty depressing. First, you’re forced to watch her relationship with Christa deteriorate (baby bump is gone with no baby in sight, awkward). Then, left to fend for herself, she thinks she catches a break when a nice little doggy comes to say hello. At first, it seems like it’s going to be a cute pup that joins Clementine on her journey, maybe even rescues her out of some trouble, but nope. As soon as it realizes it isn’t getting the cut it was expecting from the canned food that Clementine found, it rips a chunk out of Clem instead, and this is what kicks off the event that leads her to join up with the cabin group.

A lot of people found Sarah to be irritating, similar to Duck in season 1. Me though, I couldn’t help but feel sorry for this poor, sheltered girl, that clearly wasn’t socially developed yet and was very emotional young, being chewed up (literally) and spit out by this harsh world. She gets by, at least until the death of her father, a good man who at least tried to treat both Sarah and Clementine well.

Clementine and the cabin crew try their best to prepare, protect, and give Sarah a chance to survive. However, when she is tested, regardless of what the player tries to do to help her, she fails, and fails hard. 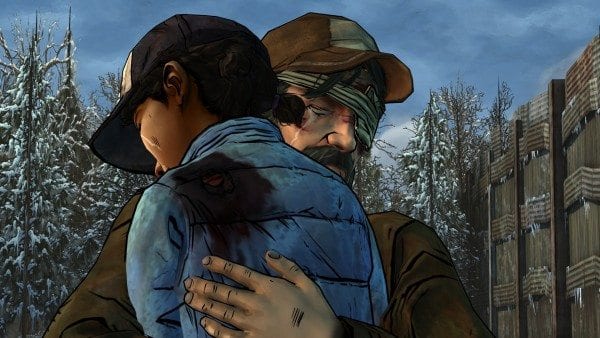 This one is determinant and if you chose Jane in the final action-packed scenes of season 2, that you would miss out on this one. Which, to be fair, if you chose to help Jane, not Kenny, then saying goodbye to Kenny probably wouldn’t do anything for you anyway. BUT, if you are pro Kenny, then the last moments of season 2 are absolutely brutal.

Once again, Clementine is put in a situation where she has to say goodbye to someone she trusts, someone she views as a protector and father figure. She can choose to stay with Kenny, but it’s heavily against his wishes, and definitely not in the best interest of A.J., the child of Rebecca that Clementine has effectively adopted.

If you do indeed choose to take shelter with A.J. and leave Kenny, behind you’re rewarded by getting to see Kenny, distraught (but proud), say tearful goodbyes to Clementine as he walks off, alone, into the wilderness, never to be seen again…

What is with Telltale and insisting that all likable young children must meet an untimely death? There are so many frustrating, and annoying characters in season 3 of Telltale’s The Walking Dead, but Mariana is one of the few that are wholly unproblematic. She’s kind, respectful, and does her best to keep a smile, and find good in her crappy situation.

Of course, we don’t even get to spend a full season with her because at the apex of her happiness: her reuniting with her family after some turbulent times and finding the headphones that had eluded her, she is out of nowhere shot right in her head and killed instantly.

It’s a huge a shock to everyone, including the player, because it appeared like you had just pulled through the bad part and were in the clear. Nope, the one wholly likable character is gunned down and you’re burying her by season 2. Great.

Clementine is pretty depressing in season 3. After two seasons of trying to trust others, she’s given up in a lot of ways and has become cold. The one person that keeps her going, and gives her a glimmer of hope for the future is A.J. Clementine would do anything for A.J. up to and including stealing from a dangerous group that she has a tenuous working relationship with.

By episode 3 of Telltale’s The Walking Dead, you learn that something is wrong A.J. You don’t know exactly what, but he’s not developing at the rate a normal child would. Clementine believes that a certain medication is helping him to recover/stay alive, but has been barred from taking any more.

Whether you decide to take the drugs or not, seeing Clementine so desperate, and then punished for her actions by having A.J. taken away from her is hard to watch.

Like Kenny’s scenes in season 2, seeing Kate die is dependent on what you decide to do at the end of season 3. Your relationship with Kate is kind of a strange one, considering the love triangle that exists with Javi’s brother, however, if you’re the type of player that wanted to make everyone happy (like me) and wanted to be with Kate, but also still try and have a relationship with your brother, well, you’re rewarded by seeing the woman Javi cared for, and fell in love with, die.

You’re essentially forced into going all in on protecting and caring for Kate, or likewise with David, who honestly doesn’t deserve it as much as Kate does. If you try and half-ass one or the other, Telltale punishes you hard. Kate, for all of your effort, will end up a walker. That’s what you get for trying to do the right thing in the universe of The Walking Dead. No good deed goes unpunished.