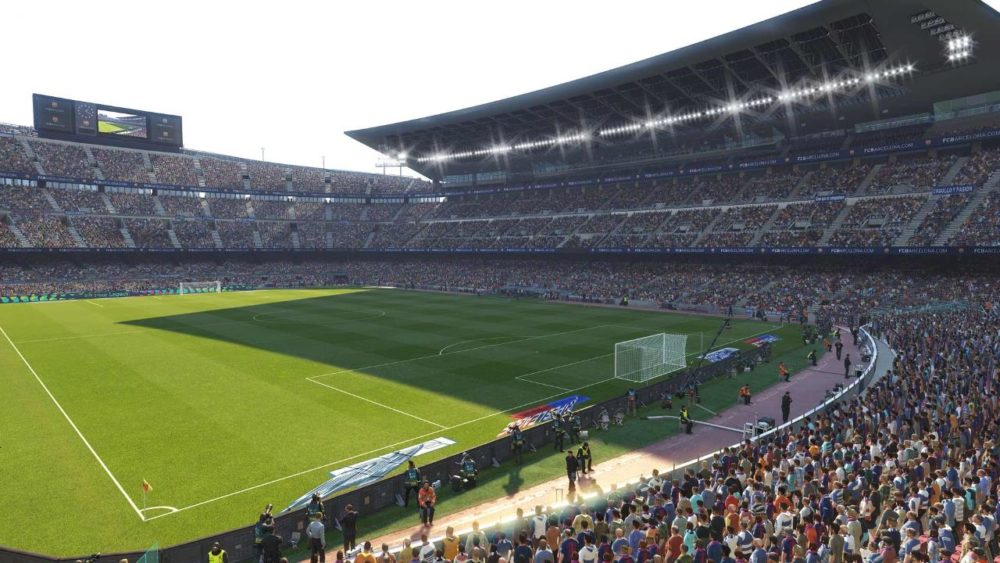 Konami’s Pro Evolution Soccer series was at the peak of its powers in the mid-2000s, with Pro Evo 5 and 6 being the go-to soccer games of choice in 2005 and 2006 respectively. However, while PES has seen some important improvements over the past three or four years, FIFA has completely dominated the soccer game space.

Tweaks have been made to the game modes, the match-day atmosphere, and the general on-pitch gameplay, creating a game that arguably offers the best simulation of the sport, but it lacks the all-encompassing presentation and marketing strength that made FIFA what it is today. PES 2019 was a step forward for the series once more, but it still hasn’t closed the gap on EA Sports’ juggernaut.

As it has been for the past few years, gameplay is king in PES 2019. For some, great gameplay is all they’re looking for and, as we said in our review, “the football, especially going forward, is just so good.” The passing feels crisp and accurate, players move realistically and feel in control of the ball at all times, and the defending is consistent. If you’re after a game to prove your soccer skills on, PES 2019 is probably the best bet due to the gameplay being precise, yet enjoyable.

While twenty games with the FIFA 19 beta showed us that the Timed Finishing and Active Touch System are making EA’s game feel different this year, it’s still lacking the consistent quality of PES. AI-controlled players can be frustratingly error-prone, the passing shifts wildly from pin-point to wayward, and keepers lose their heads more often than they should. The gameplay speed makes it feel more arcade-y, and therefore more accessible to some, but the inconsistency and lack of a true skill gap can make it feel very frustrating. Of course, we don’t know how it’ll pan out exactly for the full release, but early signs suggest that it’s going to improve, but not reach the level of PES’ new entry.

FIFA is about more than on-the-pitch quality, however. EA Sports has created an incredibly compelling overall package that mixes presentation flair, variety, and engaging live content to keep players coming back. Even now, just four weeks before FIFA 19’s release, I’m still jumping back in to tinker with my Ultimate Team and complete the new SBCs in FIFA 18. The match-day atmosphere is superior, with the crowd and stadiums being livelier than in Konami’s game and the almost daily live content in Ultimate Team keeps the market unpredictable and keeps you coming back to make changes.

In the single-player space, FIFA’s The Journey offers a contained single-player story that PES does not. With the likes of NBA 2K and Madden adding story modes, PES is simply behind the curve. It may not be why many people pick up the games every year, but it’s just another example of why Konami’s series is more shallow of an experience than EA’s. Finally, while it may seem trivial, it cannot be underestimated how important the menu aesthetics are. Navigating much of Pro Evolution Soccer 2019 feels like a chore. Compared to FIFA, menus look cluttered and confusing; lacking the crisp, high-quality design that EA’s games always have. It may not affect the football itself, but it’s undoubtedly important to the experience.

Another thing that is never a concern for FIFA fans, but is a flaw in PES is the licensing. While Konami has made deals with some teams, bringing iconic stadiums and clubs to the game, many are still without names, kits, and stadiums. That problem both undermines the simulation it’s striving for, and limits the live content possibilities. Upgraded players, SBCs, and promotions are what keep Ultimate Team going, and while PES offers something similar with MyClub, it always feels a few years behind.

FIFA also arguably offers more new features this year than PES 2019. The aforementioned finale of The Journey gives players a new 10-hour story to play through, Divisions Rivals completely revamps Ultimate Team, and the gameplay changes will hopefully add a skill gap to the game. While the on-field tweaks to ball and player control are more than welcome, and it can’t be ignored how great PES is in this category, its other new features suggest that it’s simply trying to catch up. A re-designed player card system in MyClub and cards that are affected by real-world performance are things that FIFA has done for almost a decade, and the licensing deals that Konami boasts simply aren’t issues for its rival, aside from the Brazilian League.

While we’re yet to play the full FIFA 19 release, PES 2019 will likely be king when it comes to on-the-pitch action. That’s where the series always shines, but by struggling away from the grass with licensing, content, and general design, it’s always going to be a less appealing package than EA’s juggernaut title.