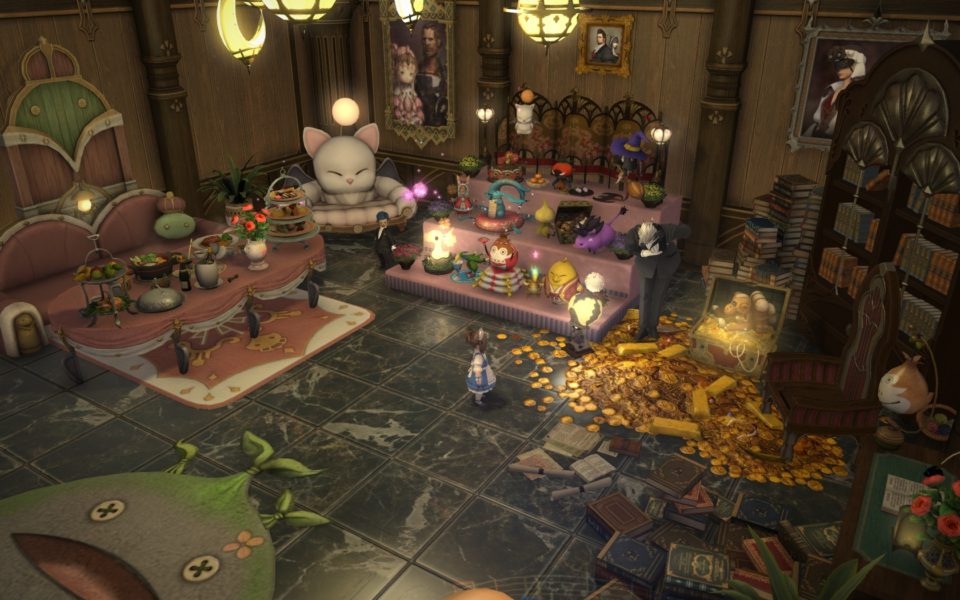 Many moons ago, I wrote about the latest housing drama to hit the world of Eorzea in Final Fantasy XIV. This should come as no surprise to any FFXIV player. Whenever a new housing patch drops, there’s always a mad rush to claim property and plots of land. In that last patch, players had taken to creating multiple characters to game the system and grab more plots than they should have.

Even if you’re early or lucky enough to find a free plot, there’s also the matter of actually buying the land with your hard-earned Gil. If you’re willing to settle for just an apartment, you’ll only have to pay half a million Gil, furnishing expenses not included. But if you’re wanting to buy larger houses or mansions, the cost can go up to as high as 50 million Gil, which is pretty much out of the budget for any casual player. And you know what’s even crazier? If you convert Eorzea’s Gil into real world currencies, and take into consideration the supply and demand for housing in the game, you’ll find that the real world costs of Eorzea housing can be astronomical as well.

Last week, I was made aware of a rather interesting website created by London & Country, a mortgage consultant company based in the UK, which attempted to determine the real life costs of housing in various games, including the likes of Skyrim, Breath of the Wild, and Los Santos. The results were certainly interesting, to say the least.

To establish a common ground between the real world and these video game worlds, they first had to compare the prices of other items found in the game and see how they would stack up in reality. A lot of the conversion comes from looking at in-game food items, checking their prices, and then comparing them to the prices here. So, in the case of Skyrim, the website creators studied items like salmon steaks and wine, as well as the cost of food production in that game.

‘To generate a conversion rate from the Skyrim Septim to GBP, USD & Euro, we first had to establish a common ground between our world and the Elder Scrolls universe. We found this common ground in the form of the food items which can be bought and sold in both worlds. Carrots, spiced wine, goats cheese, and many other food items would be the key to generating our conversion rate.

In our currency conversion process, we also had to take into account the cost of producing food in the realm of Skyrim. Nothing is mass produced in this Nord wilderness, so we made the assumption that the value of this organically grown and pastorally-farmed food would be more akin to the organic produce you can buy in UK supermarkets.’

In the end, they came to the conclusion that 1 Septim in Skyrim was the rough equivalent of $2.50 USD. Which would mean that purchasing Breezehome in Whiterun, which costs 5,000 Septims, would set you back about $12,476. Not too shabby at all.

Now let’s talk about some Final Fantasy XIV housing prices. Similar to what the creators did with Skyrim, they also had to determine a conversion rate before they could find the real world value of these ridiculous mansions.

‘Conveniently, there are a lot of items you can buy in FFXIV that you can also buy in our world. Mineral water, eggplants and monkfish being just a few examples. Using these similarities, we compared the prices of many different food items and took an average across all items to arrive at our conversion rate.

What became clear during these calculations was that the cost of food items was largely similar to what it would cost to buy them in our universe. Mineral water can be bought for 1 Gil, and we found that the average equivalent cost was £1.10 at the time of research. Buffalo Sirloin costs 6 Gil in FFIV and approximately £7.50 from a UK retailer.

However, the key difference between our world and Eorzea lies in the costs of the properties themselves. Property in FFXIV is extremely expensive – especially the cost of plots (which range from fifth to first-class).’

Not only that, demand for housing in Final Fantasy XIV is incredibly high, which will inevitably drive the prices up. So let’s talk about the apartments first, which are the cheapest form of housing you can get in the game right now. The conversion rate they came up with was that 1 Gil would be converted to around $1.93 USD, which means that a tiny 500,000 Gil apartment would cost $965,901. Imagine that. And on the other end of the spectrum, a large plot of land would cost around $80 million, and that’s not even counting the furnishing costs just yet.

Now, I’m no property guru, but those are some pretty heavy costs. Doing a little bit of research, Eorzea’s apartment costs are about four times higher than your average two bedroom condos in Miami. But for smaller countries like Singapore, where I live, these prices are actually pretty close to what we have here. A three bedroom condo here goes for around $900,000 USD, which isn’t that far off from what those crazy Eorzeans are paying in Final Fantasy XIV. Eorzea is basically Singapore in terms of housing prices. Who’d have thought?

With FFXIV’s latest episode in housing drama, where players are seeing their houses get demolished even when they’ve stepped in during the grace period, it looks like more land plots will be made available for purchase. Still, with the overwhelming demand for housing, it’s very unlikely that the apartment and land prices will ever see a substantial drop. But it’s still interesting to entertain the thought of potentially paying astronomical amounts of real world money for virtual housing.

If you’d like to read more about video game currencies and housing prices in GTA V, The Witcher 3, Stardew Valley, and more, you can check out L&C’s website here.