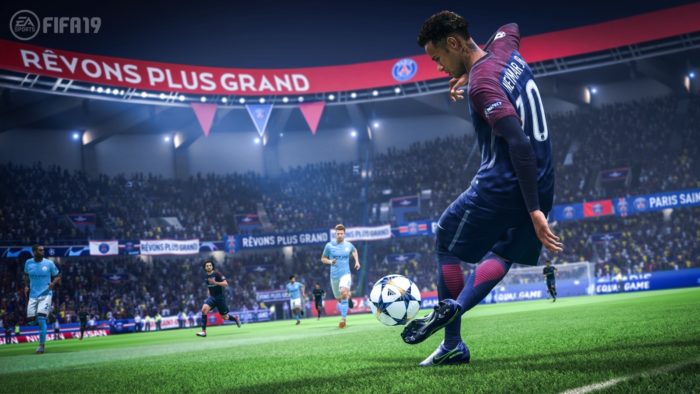 Throughout the past week, EA Sports has released more information about the main gameplay changes to be introduced in FIFA 19. In an interview with US Gamer, and the first part of EA’s regular new feature, Pitch Notes, they ran down what each of the changes mean for the game, and it’s all looking very positive. Rather than simply adding faux realism into the game, the changes seem to be designed specifically to fix issues that many FIFA fans have had with the series over the last few years. On top of improving the studio’s communication with fans, which has been a point of contention for a while, the Pitch Notes will be music to the ears of fans who are hoping for a leap forward with FIFA 19.

The first of the new features is Timed Finishing, and it sounds like it’ll add a much-needed level of skill to shooting. When you shoot, you can press the button again when the player you’re controlling is about to connect with the ball, giving you the chance to pull off a more accurate and powerful shot. In the last few years, the low driven shot, which is also done by double tapping shoot, has been extremely overpowered.

“We definitely had feedback that some types of shots, like the low-driven shot, where you double tap the button and it goes to the far post, that was something that the professional players seemed to use all the time,” said FIFA gameplay producer, Kantcho Doskov.

Previously, there was very little timing required at all, you just hit the button and waited for the ball to fly into the net. It’s unclear whether timed finishing will replace the low driven, but EA Sports says that it will “add more skill to that mechanic.” A lack of skill gap, meaning players at different levels can beat each other by using particular overpowered tactics, was a common complaint about FIFA 18. While it is “completely optional,” the addition of Timed Finishing shows that creating a wider skill gap is a priority for the new game. Having the skill to perfect the new mechanic will give you a better chance in a tough competitive situation, and that’ll make modes like FUT Champions fairer.

Unrealistic first touches have also been an issue for many FIFA players since First Touch Control was introduced in FIFA 13. Before then, first touches were always perfect, so the feature added realism to the game. It wasn’t without its frustrations, however, especially when it now often feels as though top-level players can’t trap a ball correctly when you need them to. FIFA 19’s Active Touch System will hopefully go some way towards fixing those frustrations, making each player feel more realistic and reliable. We felt that in action when we went hands on with FIFA 19 at E3. Although it became clear to us that there will still be frustrations attributed to the realism, the gameplay felt well balanced and it was clear that there were “new options to beat opposing defenders on the turn or slide through-balls to teammates fluidly.”

Active Touch System is “a rewrite of how the game calculates every moment in which a player touches the ball in the game,” meaning that there will be something behind everything that happens on the pitch. We should now be able to understand why a player makes a first like he does, or why he moves in a certain way. “The ball control player attribute will determine how effective each player’s flicks are in the game,” suggests that it’ll be down to individual statistics, which will mean analysing a player’s qualities will be more important than ever. Before now, we’ve not known exactly what the ball control attribute does in-game, but it’s great that EA Sports is being more open about that kind of thing.

The new Dynamic Tactics system will hopefully solve another FIFA 18 issue: the imbalance of custom tactics and play styles. Related to the previously mentioned skill gap issue, there are certain tactics present in FIFA 18 that don’t have equal and opposite counters. Setting your team’s tactics to ‘Park the Bus’ with low pressure and low aggression will see every outfield player sit on the edge of your box. While this is entirely fair, the opposite tactic, All-out Attack, wasn’t balanced in the same way. You’re unable to put high pressure on the opposing team’s defense to the degree they’re in danger of losing the ball or conceding. It is easy to sit back, cut out passing lanes with a Defensive Midfielder, and pass the ball around once you get it because it’s impossible to put a high level of pressure on, no matter what custom tactics you use.

Dynamic Tatics will mean that “each tactic has an advantage and disadvantage that can be exploited,” and you have more tactical options at your disposal. Whether they are balanced enough in FIFA 19, only time will tell, but the idea that “if you can identify what your opponent is using, you can respond quickly during a match by changing your own tactics” suggests that the skill of being able to analyse the game will be vital to success.

Conceding cheap goals in FIFA is always frustrating. Seeing a keeper parry a ball straight into an attacker’s path, or the ball popping back to an attacker after successfully making a tackle in the final third, is an attempt at realism, but it instead added luck based moments into a game of skill. It seems now, however, that 50/50 battles will be determined by visible factors, rather than seemingly by luck. EA has said that, “now, all players have the same instincts when competing for 50/50 balls,” suggesting that both player skill and in-game player stats will determine how tussles play out. EA’s description, outlining what the determining factors are, gives us a better understanding of what in-game stats do. We’re still generally unaware what each stat category means and what it affects on the pitch, but information like this goes towards giving us a better understanding. Pitch Notes will hopefully give us more of this going forward.

Goalkeepers have also been poor for years – often making unbelievable mistakes or simple not having enough animations to stop certain shot types, like the overpowered low driven. It seems, however, like they’ll be more responsive in FIFA 19. Doskov said, “The goalkeeper will be able to dive for the initial ball trajectory, and as it gets deflected in the middle of the dive, he’s able to adjust and try to go to where the ball’s going,” which will lead to keepers being better in game, and that will surely lead to less frustration. Doskov does mention the realism of goalkeeper mistakes, which is a little worrying. While increased realism is great in theory, considering that FIFA is becoming a game that is more and more focused on esports and competitive play, I’m not sure that there’s a place for mistakes that the player can’t control being built into the game.

While we won’t know how the gameplay holds up until weeks or months into FIFA 19’s lifecycle, we were impressed when we had the chance to play the game at E3 and EA Sports are making all the right noises with their new communication focused initiative. The gameplay changes, while not revolutionary, seemed to be aimed at fixing issues FIFA fans have had with the series, instead of simply adding realism to the game’s detriment. Thankfully, we don’t have long to wait until we can see the changes in action for ourselves, and let’s hope EA Sports continues to tell us more about their game through these Pitch Notes articles.