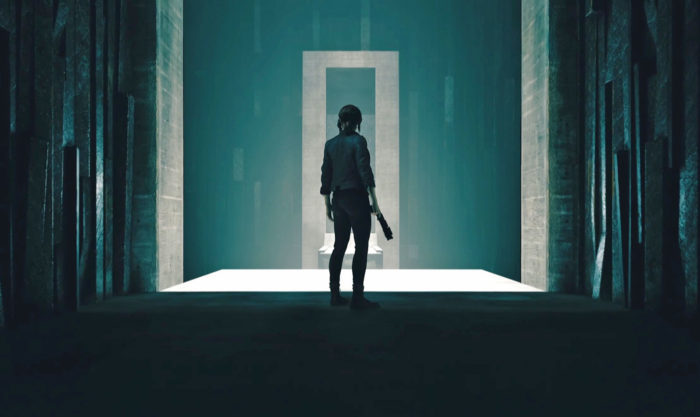 With the recent reveal of Remedy’s new IP Control, a game that had us very confused even after playing it, fans of a particular website will immediately find similarities between the two. The gameplay demo seen at E3 shares a similar vibe with a creepy website known as SCP Foundation.

The SCP Foundation is a fictional organization that is the subject of a web-based collaborative writing project. The fundamental idea behind SCP Foundation is that SCP (Secure. Contain. Protect.) is a secret organization that operates with the task of containing strange objects, entities, and phenomena. These anomalies pose a significant threat to global security by threatening either physical or psychological harm.

From the basic premise to specific references, Remedy’s Control takes direct inspiration from SCP Foundation. In fact, narrative lead Anna Megill stated in an interview with IGN they took direct inspiration from SCP. “We do have inspirations like Jeff Vandermeer’s Annihilation, House of Leaves was a big inspiration for Sam at the beginning, and the SCP site. It was an influence on our game when you see the altered objects locked away in their cells because they have these strange powers. The inspiration came from digging through that website, and there were some cool ideas in there.”

Inspiration doesn’t necessarily have to lead to direct references. However, Control appears to have been more than just inspired by the SCP. There are some eerie similarities going on here as well.

The most obvious reference toward SCP is the refrigerator in unit 75. During the demo, the main protagonist, Jesse, walks by “altered items,” which are “items that fit no known scientific paradigm.” As she walks by unit 75, she sees a distraught man sitting in front of a refrigerator with a safety orange color hue. The man never turns around to look at Jesse, but he cries out for help, “Someone has to watch this object at all times, or it deviates.” It is unclear what exactly happens when eye contact is interrupted, but it is clear that something awful will occur if the man was to leave and lose eye contact with the refrigerator. Fans of SCP will see this as a reference to SCP-173. SCP-173 is a sculpture constructed from concrete and rebar with traces of Krylon brand spray paint. The SCP-173 cannot move while in direct line of sight, it is capable of movement at any other time, including during the time it takes a person to blink. The object is hostile as it kills anyone who isn’t looking at it.

Just before Jesse has her encounter with the man in unit 75, she sees a white car in unit 76. The vehicle appears innocuous, with a damaged front hood, as if it was in a collision. There is no interaction with the car in the demo, but it seems like the car is a reference to SCP-462. SCP-462 is a 1968 Chevrolet El Camino that is also in a state of disrepair similar to the vehicle in unit 75. SCP-462 is a car where if a person sits in the driver’s seat and turns the key as if to start the vehicle, that person will instantaneously disappear. Reappearance can occur within a minute or in seven months; the person reappears near the area confirmed as being the chosen destination. SCP 462 sounds like it could be a useful car, without the prolonged travel time, right? Unfortunately, according to the site, 35% of the people never reappear and cannot be located, even when fitted with a GPS transceiver. Also, most people show up in various states of dismemberment.

Aside from eerie house appliances and creepy cars, the setting of Control shares qualities with SCP-470. Both SCP-470 and The Oldest House, where Control takes place, are large office buildings where rooms shift into other locations. In the gameplay demo, Jesse can manipulate the environment around her so that the building itself transforms. SCP-470 shifts by itself, the main difference is that only rooms change, the hallways stay the same. Both The Oldest House and SCP-470 contain dangerous, hostile entities. The Oldest House contains The Hiss, the main antagonist of the game, while SCP-470 has Subject R, an unknown being who is responsible for many SCP personnel deaths.

Control and the SCP Foundation share comparable anomalies and locations, but the biggest one is with the organizations themselves. Both the FBC (Federal Bureau of Control) and the SCP Foundation are organizations tasked with dealing with strange anomalies and the supernatural. Both organizations share similar categorizations. SCP categorizes world ending objects as Keter, whereas the FBC categorizes world ending objects as “alter-world events.” The FBC and the SCP Foundation hold these anomalies in containment cells to study and protect the public from them. Sam Lake, the creative director of Control, describes the FBC as a “weird, bureaucratic agency.” When reading entries on the SCP site, that same style is present. Entries on the SCP site are written as structured internal documentation, complete with blacked out and redacted text. The academic and scientific writing style gives an added level of credibility as if a real government agency wrote these articles.

With all the similarities and references accounted for from the demo, what does this mean when it comes to the narrative of Remedy’s Control? Megill stated about the tone of the game: “Our driving underline idea is new weird, which borrows elements from horror, science fiction, speculative fiction and takes them and warps them into something new and strange that you might not be expecting. I have a big sign at my desk at work that says ‘make it weird’ and that is what we are trying to do.” Sam Lake even shared this sentiment, “We are passionate about this in fiction, let’s go crazy, let’s go out there.” Control doesn’t seem to be afraid to venture into the strange and mysterious. Throughout the demo, the game shows plenty of bizarre and eerie moments. The bodies float in an odd dreamlike state, the levitation and telekinesis powers that Jesse possess, the man with the refrigerator, the shifting of the building when Jesse recites a ritual saying. All of these aspects from Remedy’s Control feel like it was from the SCP Foundation itself.

Based on the influences from the SCP Foundation, the story of Control seems to carry this pragmatic and even deadpan style to it. The brutalist design of the building, along with the mixture of the mundane and the extraordinary, gives Control an added tension and creepy atmosphere that is reminiscent of Alan Wake. The SCP Foundation houses plenty of ominous objects that cannot exist due to the law of physics, the foundation commits awful actions to keep the dangerous SCP’s at bay, such as with SCP-231-7. Will Jesse be forced to commit atrocities for the greater good? It is unclear how exactly “The Hiss” works, but if the Federal Bureau of Control partakes in comparable actions as the SCP Foundation, it can place Jesse and the player in a contentious situation. Fridge Horror is prominent in SCP, and we get hints to it with the E3 demo for Control. While Jesse doesn’t seem to contemplate something that seemed innocuous, The player sure does. From the strange car, intimidating refrigerator, ghostly voices, and haunting corpses in the air, Remedy’s Control hint at some fridge horror as well. While it seems that Control will be more of an action-adventure, especially considering the gameplay and look is identical to Quantum Break, there will still be some off-putting and off-center material.

Gathering from the IGN interview, and what was in the demo, Remedy’s Control is going to have a strange and bizarre story to tell, that much is clear. It most likely won’t be a horror game outright but will carry some of its unsettling inspirations from SCP Foundation. In between a familiar aesthetic and gameplay loop from Remedy, its story looks like it can be the most interesting and unique aspect of the game.

Control is expected to have a 2019 release date and will be available on PS4, Xbox One, and PC.