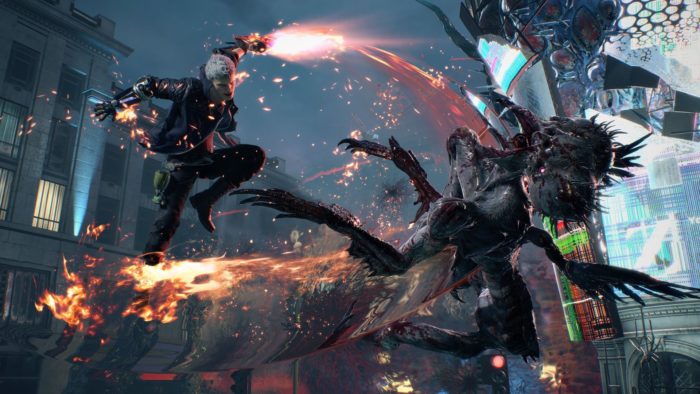 Ten years after Devil May Cry 4 debuted in 2008, we’re finally getting a follow-up in the form of Devil May Cry 5. Or are we? It’s difficult to figure out where in the series’ somewhat convoluted timeline exactly where the new game, starring a much more rugged and worse-for-the-wear Nero, fits in. Is it a direct sequel to Devil May Cry 4, or does it take place somewhere further back, situated in some indistinct part of DMC lore? Let’s consider what we already know about the game and take a stab at figuring out just where in the heck Devil May Cry 5 actually fits.

To begin, let’s take a look at the facts about Devil May Cry 5. The star of the show is Nero, the same character who made his first appearance in Devil May Cry 4. We didn’t learn as much about Nero as we would have liked during Devil May Cry 4, though it’s believed that he could indeed be related to Vergil, Dante’s brother, or at least a descendant of some sort. Dante ends up bestowing Vergil’s katana, the Yamato, to Nero, near the end of the game, so our first clue at Nero’s heritage comes there. Unfortunately, most of the game is spent exploring a somewhat lackluster plot that seemingly has little in common with the rest of the Devil May Cry series.

To that end, it’s easy to deduce that Devil May Cry 5 is, instead of a continuation of the excellent reboot that was DmC from Ninja Theory, a direct sequel to Devil May Cry 4. Given the way Dante looks and apparently interacts with others, even from this extremely short clip, it’s safe to say his entire personality could shift from his sardonic, sly persona we were introduced to in the original Devil May Cry and Devil May Cry 3: Special Edition.

We don’t know much about Devil May Cry 5’s plot just yet, but game director Hideaki Itsuno has confirmed that it will revolve around mysterious happenings in the demon world, which extends to Nero and company, as well as Dante, somehow. Dante’s looking a lot more worse for the wear this time around, with a gray beard and long, unkempt hair from his brief appearance in the game’s reveal trailer.

The crux of Devil May Cry 4’s gameplay was Nero’s Devil Bringer arm, which allowed him to pull off some tricky maneuvers and perform useful actions within the context of the game. In Devil May Cry 5, Nero has lost his Devil Bringer arm completely, and it’s been replaced by a mechanical one furnished by his partner Nico. Nicoletta Goldstein is an expert craftswoman who works alongside Nero’s demon hunting business called Devil May Cry. She goes by Nico, and she’s a cybernetics expert.

What exactly happened to Nero that would necessitate him suddenly working with a partner, let alone the granddaughter of Nell Goldstein, the creator of Dante’s Ebony and Ivory guns? There’s a lot of questions that are as yet unanswered that could help us piece things together, but for Nico to be as grown as she is, the game can’t take place anywhere near the original Devil May Cry. Grandmother Nell only ever made an appearance in supplemental materials to the game, but it’s all still a part of the same timeline.

We already know from the trailer that Nero’s arm is unceremoniously ripped off by someone wearing a dark hood that keeps their identity concealed. It’s possibly this could be Vergil, who was assumed to be dead at the end of the original Devil May Cry, so if has returned, that positions the game perfectly to follow up Devil May Cry 4. If Nero is indeed related to the sons of Sparta (possibly by way of Vergil, but who is his mother?) we should get some sort of information as to what the family connection may possibly be.

There was no prior mention of Nero in any of the other Devil May Cry games, including Devil May Cry 3, which acted as a prequel to the entire series. For simplicity’s sake, the writers likely wanted to pick up right where they left off, or at least some time afterward, to lessen confusion about Nero and company, especially as he just disappeared after fans were taken down the DmC rabbit hole.

So what’s going on with Nero in this new adventure? Where in time can we find him as well as the rest of the Devil May Cry cast? A safe bet is currently right after Devil May Cry 4, but given that the games have tended to jump around chronologically since their debut, even that isn’t set in stone. Unfortunately, we won’t know for sure until Devil May Cry 5 launches in early 2019 for PlayStation 4, Xbox One, and PC. We’ll make sure to give you a full rundown and explanation of the characters’ relationships and ties to previous games when we’re finally able to dig in, but for now, unfortunately all we have is speculation.