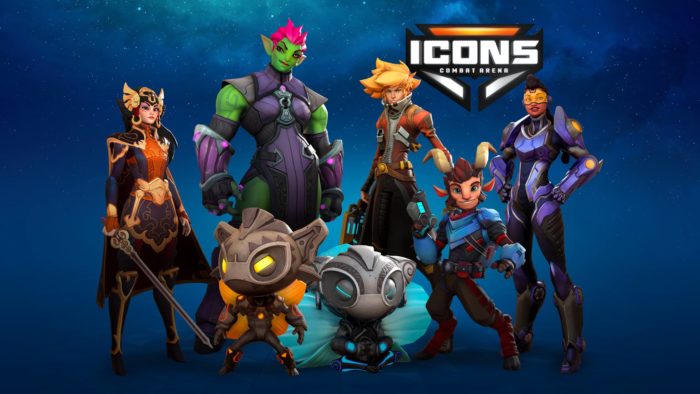 The platformer fighter is a niche genre. Not everyone enjoys this kind of game, and not every developer is willing to make it, either. Nintendo has basically cornered the market on platformer fighters. Unless you have an encyclopedic knowledge of video game titles, odds are the only platformer fighter you can think of is Super Smash Bros. However, that doesn’t mean the genre isn’t ripe for new developers who want to leave their mark. Many have tried in the past to mostly middling results (at best), but the latest kid on the block, Icons: Combat Arena, shows promise. But, like a kid, it has some growing pains to go through before it’s ready to stand up to Sakurai’s juggernaut of a franchise.

You might wonder what Icons: Combat Arena is. Simply put, it is a Super Smash Bros. clone for the PC. While games like Slap City, Brawlout, Brawlhala, and Rivals of Aether already fill that niche, Icons has something those games don’t. Well, technically, they have something Icons doesn’t: a price. Icons is a free-to-play game that copies Smash Bros’ combat mechanics to a tee. If you’ve ever played a Smash Bros. game past Melee, you know how to play Icons. Each stage in Icons is a variation on the same structure: a floating island with a few hovering platforms. This is good for players who want a straightforward fight, not so much for gamers who want some good old environmental hazards. Oh, and since each fight in Icons is basically a For Glory match, the game is devoid of any luck-based items. Icons matches come down skill, and to win, you must outmaneuver, outwit, and out-damage your opponent. While I don’t mind the lack of a For Fun mode with large, creative stages and wacky items (god knows I have lost too many Smash matches thanks to a Bob-omb spawning right in my face), I realize some gamers can find the lack of any real variety boring, especially since fighting platformers are meant to be played with more than two fighters. Sure, Icons kinda has a 4-player mode, but it’s limited to invite-only custom matches. Ideally, the developers at Wavedash should patch in a 4-player quickplay mode soon, possibly with some new levels. Items are optional, though.

When I launched Icons: Combat Arena, I loved its presentation thanks to its graphics, art design, and catchy theme song — the hallmark of any good game is a good theme song. However, my excitement was quickly tempered by the sobering realization that I only had access to three out of the game’s current roster of seven characters, and I wasn’t even allowed to pick them. I was given the same three characters as everyone else and expected to like it. I spent a lot of time poring over all the fighters during the beta, trying to decide who fit my playstyle the best. Eventually, I fell in love with Xana, the giant goblinoid wrestler woman, and Weishan and his badass guan dao — so I was relieved to find I was able to play with Xana from the get-go. Sadly, the other two starter characters, Ashani (the lovechild of Captain Falcon and Zero Suit Samus, complete with Falcon Punching power armor) and Kidd (a fast and tiny humanoid goat who is basically Fox McCloud in everything but name) just weren’t my style. Although it took me a while to learn Xana’s moves, I eventually got somewhat used to her because I have experience with big bruisers who favor power over speed. Most of my Smash mains fall into that category, and since neither Kidd nor Ashani are oversized powerhouses, I left them by the wayside. But I have no regrets on that front.

Even though I took a while to get used to Icon’s controls — and get used to them I did — I noticed two glaring issues. First, the gravity is a little off. Characters sometimes flew in directions you wouldn’t always expect (although Smash itself is no stranger to wonky physics), and they felt a tad floaty whenever they were in the air. But more importantly and concerning, on occasion, my character didn’t respond to the controls. Sometimes my character wouldn’t dodge when I pressed (or to be specific, mashed) the trigger buttons on my Xbox One controller; other times, my character wouldn’t jump when I pressed up on the control stick. Heck, sometimes I pressed the control stick up and held down the A button to unleash an up-smash, but instead my character jumped and attacked the air like a cat surprised by a sedentary cucumber. These miscommunications weren’t due to lag; I know that much because most my matches were lag-free and had fairly low pings. A few fights had characters jittering around and teleporting randomly like a Dragon Ball Z fight, but they were few and far between. I can only hope this problem is fixed in a future patch, because unresponsive controls spell doom for competitive players.

Now, odds are you have already guessed Icons: Combat Arena’s dirty little secret. Even though the game is free-to-play, it still has to make money, and you know what that means: loot boxes. Everything, and I do mean everything, that is not available when you start the game can only be unlocked through these boxes. Heck, characters can’t even emote until they’ve earned permission to do so by the RNG gods of the loot box. If you’re like me and unlucky, you won’t get any of those sweet skins or characters that have caught your eye. So when I complained that I wasn’t able to unlock Weishan, I was essentially complaining that the luck of the draw wasn’t on my side. Meanwhile, I’ve already run into several players who’ve unlocked him — or paid $25 for a pro account/founder’s pack. Currently, you can only obtain loot boxes two ways: leveling up your player profile by playing tons and tons (and tons and tons) of matches or purchasing them outright. And yes, the higher your level, the longer it takes to earn loot boxes. If there’s that one particular rare unlock that you want, odds are you won’t get it unless you throw money at the screen.

Now, for all the stuff Icons: Combat Arena does right, these loot boxes are basically gamer repellent and almost turned me off the game. Over the weekend, it took me far too long to obtain loot boxes, and not a single one of the items I got from them was the coveted Weishan unlock. Sure, I received a few emotes, but I never got Weishan. Heck, I never got any duplicate items. This is especially painful since duplicate items are currently the only way to earn in-game cash that can be spent on unlocking character skins, emotes, and characters.

While Wavedash should try polishing up Icons’ controls a bit and adding in new game modes and arenas that aren’t just simple floating platforms, I highly recommend it focus its efforts on completely reworking the loot box system. Its current implementation slows down progression to a crawl (one of the few things that keep players going despite their carpal tunnel). Imagine how much more painfully slow that progression will become once Wavedash starts introducing new characters and character skins, adding even more unlocks to the pool. The odds of obtaining the item you want could drop to the point where you would probably have better luck winning three consecutive lottery jackpots. Now, far be it from me to tell the developers how to do their jobs, but if I may be so bold, I would change the system so players earn in-game cash after every match in addition to the experience needed to obtain free loot boxes. I also would let players purchase loot boxes with in-game money. That way, players could choose between steadily working their way towards buying a specific unlock at face value and purchasing a loot box with three random items at a bargain price. A little player choice goes a long way, so it’s a good thing Wavedash announced it would change the game’s monetization.

Despite my complaints, I still enjoyed my time with Icons: Combat Arena and plan to come back for more. If Wavedash were to rebuild Icons’ monetization into a system that gives players a chance to buy stuff they want instead of relying on, well, chance, I would recommend the game wholeheartedly. Right now, though, all I can do is recommend the game with the caveat of “but only if you don’t mind loot boxes.” Regardless of the loot boxes, though, I kept coming back for more after each match, no matter how many times I won or lost. If you’re anything like the Smashaholic I am, Icons: Combat Arena will keep you entertained.