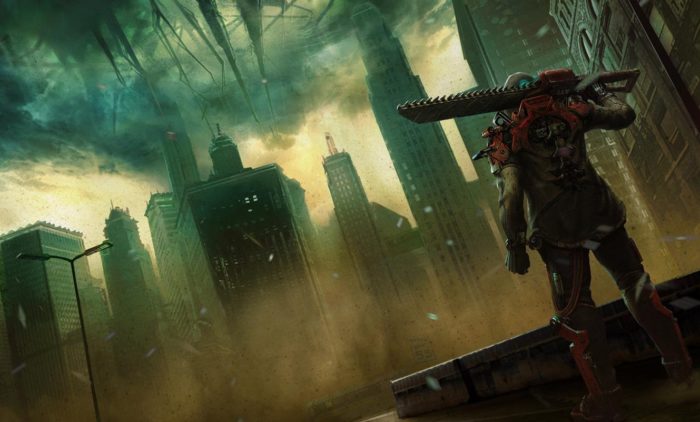 The Surge 2 was officially announced back in February, and so far it looks like Deck13 is taking feedback to heart and trying to improve on nearly every aspect of the first game. At E3 2018, Twinfinite got the chance to sit down with Jan Klose, creative director of The Surge 2, and we found out a wealth of new information, from the game’s online features to Deck13’s efforts to make player choice a much more significant aspect. You can see the entire interview below.

Editor’s Note: This interview has been lightly edited for clarity.

Twinfinite: There seem to be a lot of changes, additions being made to The Surge 2. In terms of the exoskeleton itself, are there more options than there were in the first game, in terms of how you can build it, how you can change it?

Klose: Yeah there are a lot. The maybe most obvious one is that the drone is now physically attached to the exoskeleton, and plays a major role in your ranged combat. It’s really something where you attach weapons to that, you find in the game. We aren’t in this industrial environment where we say ‘Well, why would they have firearms.’ But we’re now in this urban environment where we assume that there will be some firearms available, especially with some new factions that we introduce in the game.

So we ramped this up a little bit and said ‘Okay this is kind of your firearm thing that you have with you.’ But it’s only one hint towards there’s more that you can do with your gear, there’re other attachments that really influence the use of your gear, you might know that from the first one there were the gear lights that were a little bit like a function integrated into your gear. There will be more of that. There will be more that you can get from the enemy’s gear, like we saw with those hunters that had this cloaking device, that you can then take apart to identify cloaking devices, so you can like put the core mechanic into your system and then identify them. So you can take from the enemy and use them in different ways.

TF: With these kinds of different builds, you have a character creator now. How are you diversifying the visual identity that characters can have?

Klose: There’s a lot of layers. First of all, it’s really how the character as a person looks; male, female, color, skin tone, hair, whatever. Then, of course, you have the gear, the exoskeleton, underneath you have some more clothing options now. Like in the first one you had just Warren’s blue overalls most of the time in the game, and we were expanding this with the DLC, and now we want to have a stronger system that lets you combine stuff as you play.

TF: You said at the end of the demo that this is connected to the first Surge in story. Is anything changing about the way you tell your story? Because much of the first game was very mysterious and kind of drip-fed.

Klose: Generally the way we tell the story we want to keep similar, you pick up hints in the environment, you talk to characters, and you need to figure stuff out on your own. However, we don’t want to leave you so much in the dark, not only in terms of visuals but also in terms of how you explore the story. One bit of feedback we got was that sometimes people didn’t really know what to do, it was maybe not such a big deal, because the game showed you a path where to go. So this time we want to reverse this a little, we want you to have a very clear mission goal, so that you have this understanding and also the story behind it in your head when you go somewhere. However, then the level will be more open allowing you to go different places. So you’ll be more like ‘I think I need to go there. I think I could take this turn or that turn. Which one will be better for me?’

You can make a choice, sometimes it will be an educated choice, and sometimes you will just try it out, and this is where we think we’ve turned things around a little bit. We give you more hints, more cues on what’s the right thing and what you’re supposed to do, but also the freedom to say no I want to go somewhere else and do something else.

TF: You mentioned earlier not keeping people in the dark in terms of visuals. How are you trying to diversify the areas you explore? I think a lot of the first game, while it was striking at first, a lot of it became similar after a while.

Klose: I mean the first one played in an industrial complex, so we were a little bit limited of course to exploring this side of the visuals. Right now with having an urban environment we can show a lot more, of course. As you also saw in the demo where we played in some forest area, which is a park in the city, we also see how much we can expand on the variety. So we really tried to go very in different directions with this, still having you in some confined areas, but we really want to give you a lot of different ways to explore the city. You’ll probably go underground, you’re on the streets, in like skyscraper levels, so there’s a lot of verticality in the game.

And also we’ll have these different factions in the game world that have their own environment and that shape their environment according to their beliefs, missions, or whatever.

TF: Almost every enemy in the demo was an ambush? With the locations of enemies, are you trying to do anything with a dynamic spawn system, or is kind of using your deaths to learn about each area and how you need to proceed through it?

Klose: Well the base motivation going through there is to learn what’s there for you and how to overcome it. However, we changed a lot of the AI behavior of the enemies. So it might be that you encounter the same enemies but they won’t necessarily do the same thing when they meet you. They are clever, so they can communicate with one another, they will look for favorite spots, like one guy trying to shoot your from a distance and the other getting close. But when you go to the one shooting you they will switch roles, and the other guy will try to get distance and attack you remotely. They will do very different things; they make traps, lure you into traps, stuff like that.

TF: Dismemberment seems to be an even bigger part of The Surge 2. Have you done anything to expand that mechanic in battle, to give people more control over which specific body parts they want to remove off an enemy, because they know they can get an item from that part?

Klose: We tried to improve the visual feedback in combat, so like which zone did you pick. We also try to show a little more of what’s a protected zone and what’s an unprotected zone. Also, the body parts that are especially dangerous for you are special tech items.

So like with hunters they have this cloaking device, and you can detect which part of their armor generates the cloaking, and can take this out first. You have more tactical options you can use to go after these parts that are more crucial in this fight. Or you can not go for that part if you want to have the part after the fight and want to focus on cutting it out for yourself. It’s a risk-reward thing.

TF: With that improved AI, it seems like it may be a good opportunity for co-op or multiplayer. Are there any plans on doing anything like that, or experimenting with multiplayer?

Klose: We really do love multiplayer gaming, and right now we have planned lots of online features there. There’s no synchronous co-op or multiplayer gameplay planned right now, but so far we’re starting with some online features where you can influence other gamer’s experience in a way. So this will definitely be there, and the other stuff has to be seen maybe further in the future. But we’re looking into that stuff very much.

TF: What was the biggest piece of feedback from fans, the biggest thing they focused on, either liking or disliking.

Klose: Well coming from the positive, people really liked the close combat, so we knew okay we need to make this better and not replace it with something. The other thing, the two things that were most striking, was variety and choice. They really said we want to have more options for this, we want to have our own way of doing something. So we said okay this is tricky to just tackle as one point, so this needs to run through the whole design and all aspects of the game.

There’s got to be more variety and choice in the way you explore a level, create your character, level them up, change your character, take on missions and sidequests. All of that stuff to just give you a broader experience with more stuff you can do, but also more you can pick for yourself. This really touches everything from the basic combat to the boss fights, saying ‘Why can’t I use my drone with the boss in a good way in Surge 1.’ Because I can trigger the drone at any time but sometimes it just doesn’t do something with certain bosses. If I have a good idea of targeting the boss with my drone, then I should be rewarded for it because that was my idea, and be able to fight the boss how I want to without the game stopping me.

TF: So it’s the overall philosophy going into the game?

Klose: Yes, for different types of players we don’t want to dumb down anything, we don’t want to make anything easier to beat. But we saw that some players struggled with some of the bosses, and they quit because they said I just don’t get it. And we don’t want to have this moment in the game, we want the moment like ‘Okay I go do this or that and then I come back and I can beat the boss, this is my way of doing it.’ This is what we want to encourage players to do way more so they don’t drop out of the game, but they find their own way of overcoming hard obstacles in the game.

The Surge 2 is due out sometime in 2019 for the PC and consoles. What do you think of the changes coming to the game? Is there anything you’re still hoping to see changed, or are curious about? Leave a comment down below and let us know.