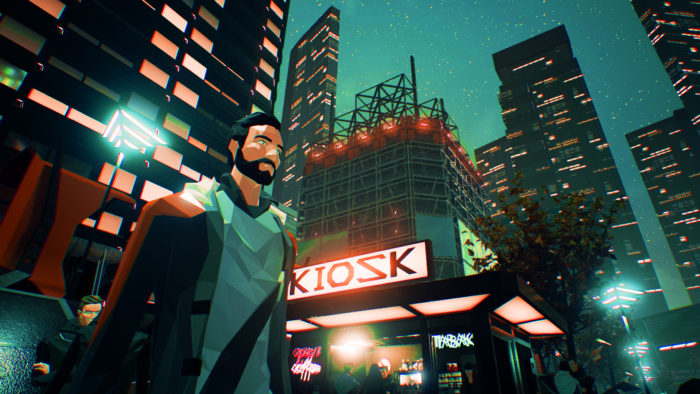 Visual novels and narrative-driven adventures are making a resurgence in the gaming landscape, and we’re starting to see more developers attempt to explore the sci-fi genre in greater depth. Last year’s NieR: Automata and Horizon Zero Dawn quickly come to mind, and just this year, we had Detroit: Become Human, whose story centered around androids becoming sentient. State of Mind is a brand new sci-fi narrative adventure game that also dives headfirst into the genre, but with a bit of a darker twist.

State of Mind’s graphical style is striking right from the get-go; character models are eerily polygonal, while the environments are vibrant with a bright and varied color palette. This is a very beautiful game to look at, and we got to catch a glimpse of it running on the Switch as well. Gameplay looked fluid and smooth, and with the way the story is broken up into chapters of varying length, this could be yet another solid story-driven title to add to the console’s library.

What’s really interesting about State of Mind, however, is the story itself. The game is set in the distant future, in a dystopian version of Earth. The game kicks off with protagonist Richard waking up from a coma and finding out that he has amnesia. What he doesn’t know is that while he was knocked out, a copy of his mind has been uploaded into a virtual world. His virtual self, named Adam, isn’t aware that he’s a digital copy, and he lives out an entire life with his wife in this digital space. The premise is immediately intriguing, and it definitely calls back to one of the more popular topics of discussion from the popular television series, Black Mirror. In the show, cookies are essentially a copy of a human being’s mind. However, while we know that they’re simply data, these cookies exhibit the same emotions and reactions as their human counterparts, and the show often touches on the subject of whether cookies deserve rights, or if they’re just AI.

State of Mind’s narrative revolves around Richard and Adam, who both eventually become aware of each other’s existence. Because they’re essentially the same person, they start to work together to try to figure out who uploaded Richard’s mind to the cloud, and try to piece their past together. Gameplay is fairly simplistic, with players examining objects in the world to obtain lore tidbits and clues, and then having Richard and Adam work together to solve puzzles. Speaking with a rep from Daedalic Entertainment, I was told that players would have to actively pass clues between Richard and Adam, and make use of both the real and digital worlds to solve story-based puzzles. That’s the core gameplay of State of Mind, though Daedalic also mentioned that the game’s runtime can easily stretch out to around 15 to 16 hours if you take the time to explore.

Aside from that, players will also get to make decisions along the way that will impact certain branches of the story. Daedalic was quick to state that this isn’t like a Telltale game. There aren’t multiple endings or decisions that will drastically change the story’s outcome. However, your decisions help to shape the characters, and they also affect the way other NPCs might react to you, and you can potentially unlock new ways to tackle later encounters.

State of Mind also features multiple characters aside from Richard and Adam, and we got a look at a female android who was just coming to terms with the fact that she isn’t actually human. In State of Mind, androids have varying lifespans that depend on the purpose they’re meant to fulfill. For instance, androids that are built to become surrogate mothers might only live for seven years, while labor-focused androids might have about 10 times as long to live. From what I saw of the short demo, State of Mind’s world-building is looking pretty impressive thus far. The technology is believable, it’s set in a world that’s caught in another east-west conflict, and we’re definitely excited to see how the game handles the conflict of interest between Richard and Adam.

We want State of Mind to go really dark with its narrative and themes (if only because the best Black Mirror episodes are always the ones with really messed up shit), and from what we’ve seen, things are looking pretty promising so far.