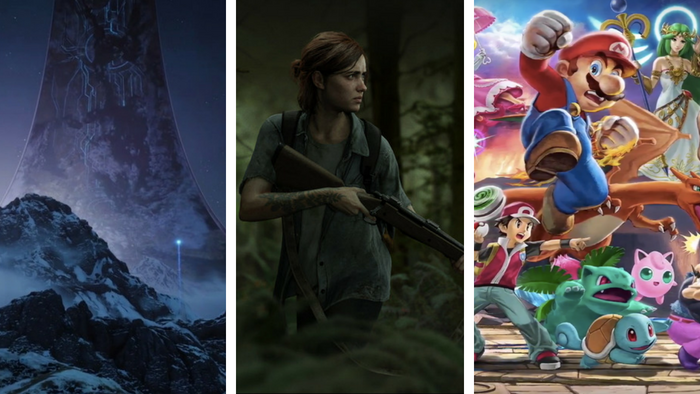 Sony’s conference took a bizarre approach to introducing more of the exclusive games we previously knew about, but hadn’t seen much of. Huge names like The Last of Us Part II, Death Stranding, Ghosts of Tsushima, and Spider-Man were on tap to totally dazzle viewers and attendees, but the setup wasn’t exactly conducive to keeping viewers engaged.

Fortunately, the conference format didn’t detract from the explosive trailers and gameplay footage Sony had on tap. Sandwiched between musical performances and interesting ambiance for each game reveal were deep dives into the games coming to the platform that we already knew about, but had been dying to see more of.

Additional exclusives were woven in between footage of the big names, such as the hilarious PlayStation 4 and PlayStation VR title Trover Saves the Universe from Squanch Games, as well as FromSoftware’s PlayStation VR title Déraciné. There were plenty of other titles on tap as well, such as Nioh 2 and Kingdom Hearts III, but in terms of exclusives, it was a bit of a small showing. Sony chose instead to focus on the biggest titles it had coming down the pipeline to great effect, which ended up working out very well.

With an eye on quality rather than quantity, we can safely say that Sony held its own with the exclusives we’ve been waiting patiently to see more of, and though we weren’t peppered with a new game reveal every five minutes, the amazing cinematic kiss in The Last of Us Part II’s trailer kicked off a bang-up conference that we’re still talking about, days later.

Microsoft came out swinging to kick off the Big Three’s set of major conferences with a strong showing, hitting all the major notes fans have been clamoring for. The conference introduced heavy-hitters like the newly-announced Halo Infinite, the latest entry in the massively popular Halo series. It was a strong start to the conference, despite only giving us a few brief seconds of footage, and a reminder that Microsoft is likely hard at work on plenty of other follow-ups just like that one, because it’s well aware of what people want. Introducing the sixth game in the franchise was the kick Microsoft needed to jumpstart what would end up being an excellent conference, and we’re all glad to see Master Chief again, even if it was for a few fleeting moments.

Other highlights included Gears of War 5, along with two spin-offs for mobile and PC in the form of Gears Pop and Gears Tactics, though the next numbered Gears entry will indeed be an exclusive. Crackdown 3 made an appearance with a trailer featuring Terry Crews wreaking havoc on the city, despite its delay, and Forza Horizon 4 stole the show in terms of realistic racers, bringing a ridiculous amount of content to the table and taking the series to Britain. Dying Light 2 will also prove to be an exciting entry in the series with a big emphasis on player choice, and a map four times the size of its predecessor.

The conference overall was structured in a cohesive and easy to follow manner, with big reveals for non-exclusives as well, like Devil May Cry 5 and Cyberpunk 2077, a game we’ve all been dying to hear more about. While the vast majority of game reveals from Microsoft weren’t all exclusive games, there was a veritable buffet of them to pick apart and analyze once the show was over, including new Sea of Thieves DLC and more information about PUBG’s console version, which remains solely on Xbox One and doesn’t appear to be coming to PlayStation 4 in the near future.

Overall, Microsoft had a strong showing, and kept the momentum going throughout its entire live show with the exclusives it had on tap. With big games that sizzled as well as the same grandiose scale we expect from the company, it offered a hopeful and exciting look into what’s planned for Xbox One and the muscle behind it as well. With a strong set of exclusives like the ones shown off during this conference, it’s easy to understand why folks are hyped to see what’s next from Microsoft.

Nintendo offered up a series of exclusive Nintendo Switch titles this year, but nothing could top Super Smash Bros. Ultimate, the game fans have been waiting for since, well, forever. Including every single character from the history of Smash was a bold move, as was announcing the addition of Metroid mainstay Ridley into the fold, complete with amiibo.

Fire Emblem: Three Houses looks like the first core Fire Emblem series for Switch, and exactly what we’ve been hoping to see since 2007’s Fire Emblem: Radiant Dawn landed on the Wii. Meanwhile, Super Mario Party brings Mario Party back to its roots on Switch, with some interesting ways to set up special levels for various mini-games while utilizing multiple systems.

We got a look at the upcoming Pokemon Let’s Go Pikachu and Eevee games, which Nintendo already spent quite a while on with their own special presentation earlier in the year, but that certainly didn’t diminish our excitement for the first Pokemon games to come to the Switch.

Mecha combat lovers got a taste of some cel-shaded action with Daemon x Machina from Marvelous, complete with mechs designed by Shoji Kawamori of Macross fame, and this buffet of exclusives felt just right for fans looking for more to play on their Switch. A heaping helping of ports helped pull things together, but overall this was a strong showing on Nintendo’s part, even if for another year in a row we’re devoid of Animal Crossing on Switch. It’s still a hideous oversight, but we can forgive Nintendo since we’re getting more Smash, after all.

The competition was fierce this year, but in terms of sheer numbers alone, Microsoft is the clear-cut winner of E3 2018. Games like Halo Infinite, Gears of War 5, Forza Horizon 4, Crackdown 3, Tunic, and the rest of the titles introduced during the show remind us that the company is doing plenty of work behind the scenes to bring folks to the console. The acquisition of various new developers is only going to help ramp up future exclusive game production, and we’ll likely be seeing the number grow in future shows as they come down the line.

Sony and Nintendo were no slouches, however, so don’t think that they in any way “lost” — they held their own in a neck-and-neck series of presentations. And when companies compete in such a close manner, consumers certainly win. We can’t wait to try out all these new exclusives once they finally come to market, and we can’t wait to see what’s in store for next year, either.