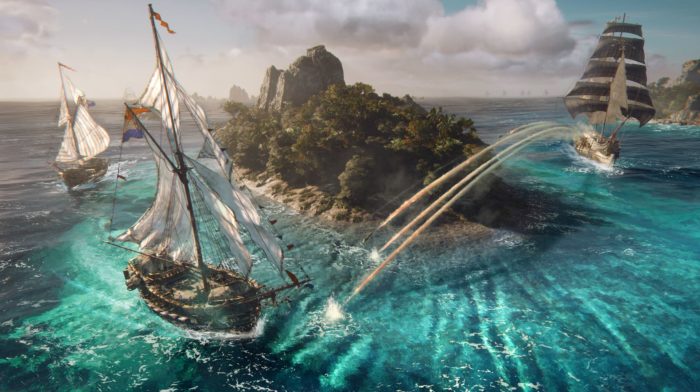 Right from the get-go, it’s made abundantly clear that Skull and Bones’ core is centered around the naval combat we first experienced in Assassin’s Creed IV: Black Flag. The main thing you’ll be doing in this game is firing cannons at ships, boarding them, then stealing their loot to buy shiny new things for your own vessel. The problem? I’m not quite sure there’s much else to look forward to.

The hands-on demo I got to try at E3 2018 started with an option to choose between three different ships. One is an all-rounder with balanced stats in firepower and mobility, one prioritizes speed and mobility, while the other focuses on firepower with decreased speed. All three ships come with special abilities, and the one I went with (the speedy one) had the ability to move forward really quickly while blasting opponents with the front cannons. Overall, the three ship types feel pretty distinct from one another, so it should be easy for players to find one that would suit their play style.

The demo kicked off with my ship already out in the open seas. I shared the same server with four other players, and we were basically given free reign to do whatever we want. The game provided us with brief objectives, such as collecting X amount of ivory from NPC ships, finding buried treasure at an island, or attack a faraway fort. If we didn’t want to do any of that, we could blow each other up instead.

Speaking with a Ubisoft Singapore rep at the demo, I learned that these objectives were simply a taste of a brief guided narrative that’ll be present in the final game. From what I could gather, they’re meant to guide players along in the large open world and give you things to do, but don’t go in expecting a deep or involved naval adventure that spans the seven seas.

As far as combat goes, if you’ve played Black Flag, you already know what to expect. Each player commandeers their own ship, and you’ll be at the captain’s helm, steering it in the right direction. Hold down the L2 button, and the camera will shift to give you a view of the horizon from your cannons, and you can hit R2 to fire at your target. Whenever you’re about to take damage, you can hold down a button to brace and reduce the amount of damage you take from incoming cannon balls. There’s a lot of artillery to make use of on the ship, and once you wear down your opponent a little, you can ram them or swerve near to board the ship.

This is where things start to get a little iffy. Outside of the ship combat, everything else is pretty much automated. Pressing a button to board a ship rewards you with a short cutscene of your crew getting onboard and stealing treasure. Immediately after that, you’re back on your ship and off on your way to find your next target. Even when you go to an island to find your buried treasure, it’s simply a matter of steering near the island, pressing a button, then watching another short cutscene of your crew digging up the stuff. I got a chance to speak with Creative Director Justin Arden Farren about Skull and Bones’ gameplay, and he confirmed that naval combat is the only form of combat that will be available at launch, with no indication of anything to come after.

Again, this isn’t a slight at Skull and Bones’ gameplay; it’s just slightly worrying that the naval combat alone might not be enough to keep players around for long. The core gameplay loop involves you starting out at your land lair or hideout, customizing your ship at will, then heading out to the seas to either pursue intel objectives or fight other players. When you’re stocked up with loot, you can head back to your lair to find out what you got (cosmetic items can be gained from looted treasure, as well), and then spend some money to upgrade your ship or customize it further. Occasionally, you might get prompts to engage in a co-op activity, where you and other players in the vicinity can hunt down a Portuguese fleet together. Or a bounty hunter ship might show up to hunt down you pesky pirates, and you might band together with other players to defeat them.

Outside of that, Farren also mentioned that while Skull and Bones is very grounded in realism and some historical accuracy, the game does feature some fantastical elements as well. He specifically stated that the pirates in the game believe in myths and legends, and we also caught a glimpse of a fortuneteller NPC who might play a much more significant role in the final product, though Farren didn’t go into too much detail about that.

Ultimately, whether you enjoy Skull and Bones is going to depend on how much you loved the ship combat from Black Flag. The PvE/PvP hybrid style of gameplay is compelling and it has massive potential, but as much as I enjoyed what I played in the demo, I’m still concerned about the game’s longevity and how well it’ll do in properly capturing a player’s attention.