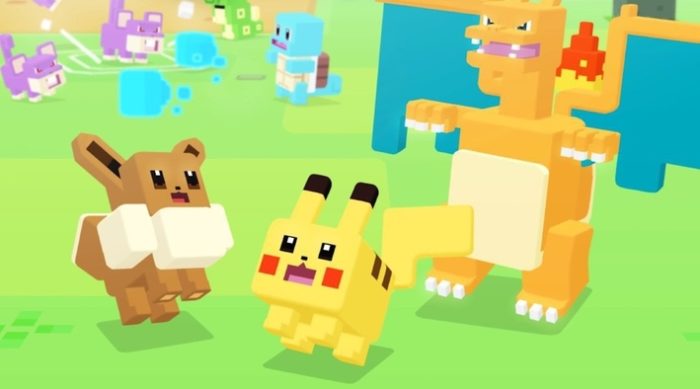 When I hear the term “free-to-play” or “free-to-start” when it comes to a video game of any kind, I tend to curb my excitement simply because mobile-type games have disappointed me from time to time. However, Pokemon Quest gives me something unique and fun that’s never been done with the monster-catching franchise before and it’s not bad. Not bad at all.

Pokemon Quest gives you access to all 150 monsters from the Kanto region, except this time around, the art style is all blocks and looks very similar to Minecraft while playing similarly to Pokemon Rumble. If you’ve been playing Pokemon GO or are just new to the franchise, then Pokemon Quest might be the game for you since it only has the original critters in the game so you’re not going to be seeing any Pokemon that you aren’t already familiar with. And if you are a hardcore Pokemon fan, then Quest can still quench that Pokemon thirst that you may have if you’ve been needing a quick pick-me-up before Pokemon: Let’s Go comes out later this year. For a free-to-start title, it has way more to offer than the Rumble series and will definitely keeps you entertained for hours on end with its loop-based gameplay that is very familiar but feels new at the same time.

Pokemon Quest starts you off from your base camp, where you can cook meals using random items that you find on expeditions to gather new Pokemon to your camp, which is how you add the super cute creatures to your party. From there, you can head on expeditions with a party of three of your favorite critters and fight wave after wave of enemies using the touchscreen to select which moves your Pokemon uses. The fighting is pretty basic and the game even allows you to have your Pokemon auto-attack if you’re over-leveled for an expedition, which makes for a very passive experience. If your Pokemon are under-powered then you might actually have to plan your movements and evade strong moves, but most of the combat is pretty simple. Defeating Pokemon nets you power stones which you can attach to your Pokemon to increase their maximum health points and attack power. As your party grows stronger with levels, your Pokemon will be able to attach more stones to their person, making them even more powerful.

As you progress through the game, the combat does become a little more nuanced. You start to learn that it might be better to have one Pokemon with defensive moves and high HP so that they can tank enemy attacks, while your other two party members can focus on dishing out high damage. Learning how to manage your move cooldowns becomes critical to winning the tougher boss fights, and you might even find yourself reaching for the button that lets you scatter your Pokemon for a couple of seconds so they can dodge an attack.

You will eventually reach a point where the grind really starts to kick in, however, Once you hit the sixth island, expedition power levels shoot up rather quickly, and the game bottlenecks you into grinding past expeditions for a chance at better power stones, or to cook more meals to get better Pokemon. With that in mind, Pokemon Quest is definitely a game that can only be played in short bursts as you’re restricted by the battery charges, which are expended when you start an expedition. If you’re not a fan of grindy games and RNG-based loot, Pokemon Quest might not appeal to you.

I’m well aware that this may all sound like any experience that you might face playing any other grindy mobile game, but completing all of these actions with some of my favorite Pokemon from the original games in the series truly makes me feel delightfully happy and comfortable, all while working towards not just one, but many goals. At the moment, I’m attempting to evolve my Squirtle and Growlithe, while also praying that I eventually find an Electabuzz, one of my favorite Pokemon from the Kanto region.

The ability to put the game down and come back to play an expedition or two really quickly and easily makes the Switch or a mobile device the perfect way to play a Pokemon game like this. After playing for a few short hours, I was pleasantly surprised by how much there is to do and challenges to complete all while being free. Now, if you waste your batteries, you can spend real money to make the whole process a bit faster (if you choose to), but I never felt tempted to make a purchase at all. Pokemon Quest never feels like it’s asking for your hard-earned money, but acts simply as a time-waster until we get to play the upcoming mainline Pokemon games on Switch. And as a free-to-play title, this is one that’s definitely worth checking out.