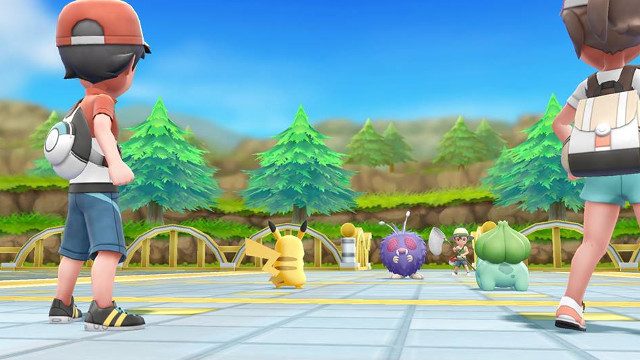 It has been a few days now since the first Pokemon games for the Nintendo Switch were announced, and it is more than likely that you fall into one of two camps: excited or disappointed. If you’re excited, then welcome. Feels great, doesn’t it? If you’re disappointed, then I ask that you open your mind a bit and allow me some time on the soapbox.

Let’s get this out of the way: Pokemon Let’s Go Pikachu and Let’s Go Eevee, which I will refer to collectively as Let’s Go, weren’t made for you. By that, I mean that this game wasn’t made for people who were invested in the world of Pokemon was before these new entries. These games, in my opinion, were made for the new generation of Pokemon players; the players that started their Pokemon journey with Pokemon GO.

A few years ago, Pokemon GO was released on smartphones across the world. If you owned a smartphone at the time, chances are you downloaded this new and unique Pokemon game. Sure, it wasn’t the Pokemon-on-the-phone game many were hoping for, but it was a Pokemon game nonetheless. Millions and millions of people played this game and millions of people still do. I think it was a safe bet that anyone who knew anything about video games downloaded this game, but more importantly, I don’t think anybody could’ve guessed that so many non-gamers (if you will) would have joined in on the fun. Do you remember those days when GO first launched? I remember walking to a Pokestop near my house, which happened to be a library, and when I arrived, there was nearly 20 other players there. Simply put, that blew my mind.

There were children, teenagers, people my age (23), adults and even what appeared to be a grandfather playing. Never in my life had I seen a game capture so many people like that. It was an intersection of all ages, of all walks of life, and all because of Pokemon.

Now, for the first time since Pokemon’s video game debut in 1996, Game Freak and Nintendo have the chance to capture a brand new set of players. That girl you work with, that guy who works out at the same gym as you, your friend’s parents who all of sudden love walking their dog every night (hint hint, they were playing Pokemon GO) – all of these people are hooked on GO, and Nintendo is about to convince them to buy a Switch and pick up the next Pokemon game.

And let me preface this: Pokemon Ultra Sun and Pokemon Ultra Moon did come out at a time when GO was extremely popular, but as anyone who played those games will know, they were still very much traditional, core Pokemon games. It’s likely that those games were in development before GO became as popular as it did, or before it had even released. With that being said, Ultra Sun and Ultra Moon didn’t really have a chance to capture the new Pokemon fans. They weren’t made for them, but now, there’s two new games coming that were.

In what ways? Let’s talk about these changes.

For over 20 years, players have rushed through patches of grass, or surfed the seas, either hoping for a random encounter with this Pokemon or that one, or praying they bypass that chance altogether. Regardless, when these random battles happened, you were either prepared to fight it (and maybe even capture it) or ready to flee. Personally, unless it’s a monster I want, I flee. Generally, these wild monsters are too low level for me to bother grinding experience with, so unless I’m searching for it to fill my Pokedex, I’m going to pass on it.

Now, with Let’s Go, I’ll be able to bypass a battle that I usually skipped anyway, and that’s because in the Let’s Go games, there will be no battling wild Pokemon. Sure, you’ll still encounter wild Pokemon (which will no longer be random), but you won’t be able to attack them–you’ll only be able to flee or attempt to catch them. How does this apply to new players, though? Well, that new set of people we talked about earlier are very familiar with Pokemon GO. When they see a wild Pokemon on their screen, they tap on it and attempt to catch it. From what we know of Let’s Go, this is being directly brought over from GO. Players will see Pokemon on their screen that they can tap if they wish to try capturing it. This is what that new generation of Pokemon fans have been doing on their phones for the past few years, and this is what they’ll continue to do.

It’s familiar and comfortable. Familiarity and comfort are the same reasons you might want wild Pokemon battles to stay. You can say things like, “it’s a core mechanic of the game,” or, “there’s no explanation for not being able to fight them,” but at the end of the day, you feel strongly about that feature because it’s what you’ve been doing for 20 years.

The other big changes coming to the franchise are the ways you play. This time around, you can play the entire game with a single Joy-Con or the new Pokeball Plus (as well as the traditional ways one might play). Quite frankly, I’m a bit amazed at the complaints on Twitter and Reddit I’ve seen regarding this. According to some, because the game can be played with a single controller, it must be simpler. It is impossible to know that that’s the case. The game isn’t out yet, but from what we’ve seen, this is still a Pokemon game and you can still play the way you’ve always played. On top of that, the Pokeball Plus is pretty cool. Go back to that time in your life where you first discovered the magic of Pokemon. If you were like me, you and your friends not only played the games, but went on adventures outside to catch real life (imaginary) Pokemon. I didn’t have Pokeballs, but I definitely had rocks, and that was enough. I would toss a rock at the Gyrados in the middle of my friend’s lake every day – I never caught that beautiful beastie.

Imagine having a Pokeball that you could hold in your hand, use to play your game and take with you everywhere. Imagine pulling that Pokeball out while grocery shopping with your parents, and being able to rub the Pokeball, only to find out that the Pokemon inside likes that and responds with its strange, but adorable, gibberish. We would have loved this, and I’d be willing to bet that a good amount of us are going to buy that thing come November, regardless of our age.

Not only have I seen complaints regarding the way the game is played, but I’ve seen complaints about the fact that another person can hop into your game. Again, because supposedly it means the game is simpler. To that, I again say: you can still play the way you’ve always played.

Beyond that, remember those GO players we talked about earlier? For them, banding together in a vehicle and heading across town to capture a Charizard was really neat. Why? It was because playing games together is fun. Bringing that same fun millions had playing Pokemon GO together into the mainline franchise sounds like an exciting change. If you don’t agree, I say once more: you can still play the way you’ve always played. Co-Op is not required in any way.

Essentially, Let’s Go Pikachu and Let’s Go Eevee aren’t necessarily for you. Believe it or not, you might not be Nintendo’s target audience. The people Nintendo is targeting, and the people these upcoming Let’s Go games are for, are your coworkers whose first Pokemon game was GO, your parents who somehow got addicted to their daily dog walks and everyone else who found enjoyment in a Pokemon game for the first time with Pokemon GO. Let’s let them have this one.

And let’s not forget, in the second half of 2019, the Pokemon game teased at E3 last year, the traditional core RPG, the one that you were hoping the Let’s Go games would be, is still coming. Patience, young trainer. Patience.