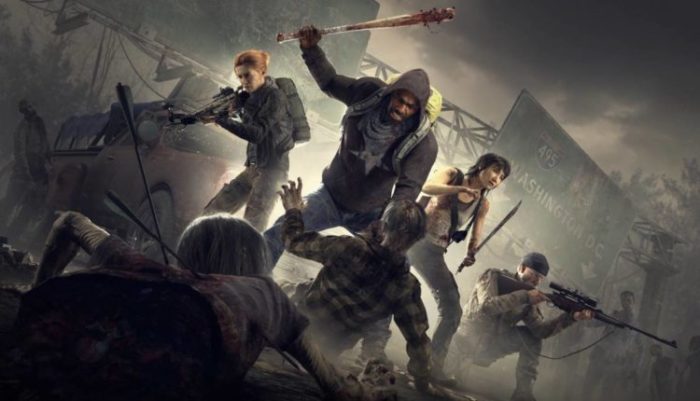 Just yesterday, we finally got our first glimpse at some actual gameplay footage of Overkill’s The Walking Dead, developed by Starbreeze Studios. For the past four years or so, we’ve only ever seen fancy CGI trailers showing off the game world and characters, but nothing to give us an idea of how it would actually feel to play. At this year’s E3, we got a chance to go hands-on with the game, and we’re pleased to report that it’s actually rather decent.

The demo we got to play came with two different missions we could tackle. In a team of four (with the ability to choose from four different characters), we had to work together to solve puzzles and pursue objectives while fending off the undead. I played as Heather, the scout character, who was equipped with a crossbow, a pickaxe, and a pistol. The crossbow is useful for players who like being stealthy, and this can come in handy when you’re trying to sneak up on unsuspecting foes. During one of the missions we played, our team came across a group of hostile human beings who we could take out via a sneaky takedown or a crossbow shot. If any of your teammates get knocked out, you have a short period of time to revive them before they’re completely dead.

The mission also threw a few simple puzzles our way, one of which involved tracking down spare fuses and some fuel so we could power a generator and open a gate to progress. For the most part, though, it was all about moving together as a unit, scavenging areas for supplies, and defending each other when there were zombies around.

The second part of the demo threw us into a camp that we had to defend. As soon as the mission started, we were given 60 seconds to gather up resources and place traps around to slow down the undead horde. Once the minute was up, we could no longer put down traps and had to start defending the camp from the zombies. From that point on, it became a horde mode where we had to take down waves of zombies as they grew more and more aggressive.

While the demo didn’t exactly give us a good sense of the overarching story or how these new characters fit into the Walking Dead universe, overall it was still an enjoyable romp through a zombie-infested world. Overkill’s The Walking Dead brought back a lot of L4D2 vibes where you and three other players are just trying to survive in an apocalyptic world by shooting anything that moves. It might not offer the kind of deep or enriching story you were expecting from a Walking Dead game, but it sure as hell is a lot of fun if you have three other people to experience it with.