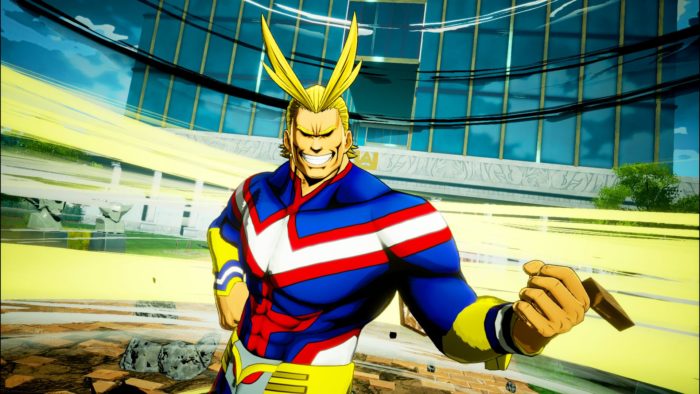 My Hero Academia has rocketed into popularity in the last year, becoming one of the most beloved anime series currently airing. The series’ first big video game adaption is almost here with My Hero One’s Justice, and after some hands-on time with the title, it seems to be a simple, albeit exciting anime brawler.

As is typical with many anime games, One’s Justice brings together characters from across the series to battle it out in 1v1 fights. It’s more of a brawler meets a fighting game, rather than just a straight-up fighting game, as you have the ability to run around a 3D arena and unleash a number of attacks. Surprisingly, One’s Justice controls are a bit simpler than other anime counterparts, particularly the likes of Dragon Ball titles. You have a basic attack mapped to the square button, while quirk-specific attacks are mapped to triangle and circle. This helps create a unique moveset for each character, and those quirk-specific attacks can greatly vary greatly in their usage, from a long-ranged attack to a whirlwind of close-range blows. Two other characters are mapped to the triggers as assists, and you can call them in for special moves when their cooldown runs out.

I was honestly amazed at how different the three characters I played as were, and the game does a great job of emphasizing each one’s respective quirks into a unique fighting style. For example, All Might is focused on keeping the enemy on the defensive with a rush of strong blows that can also turn into aerial combos, while Todoroki is more focused on keeping the enemy at a distance and staggering them into combos.

Things play out at a breakneck pace, and you have the ability to quickly dash around the battlefield at super speed. In my short time with the game I was able to play as All Might, Deku, and Bakugo, and the thing I noticed most is how important offense is. You constantly want to be on the attacks as character’s attacks can be devastating, especially if you get caught in a sizable combo.

The greatest strength of One’s Justice, however, is definitely its visual style. The visual style is super sleek, and sport some fantastic animation that makes the game look like anime. Even with the simple controls, the flashy animations and over the top destruction keep things exciting. Attacks send the enemy flying, often breaking trees, windows, objects, and whatever else might be in the way. The stage destruction gives off a good sense of this being a super-powered battle, and the camera, instead of being focused right behind your character, swings around the battle to give things a more cinematic feel.

My Hero One’s Justice most likely isn’t going to revolutionize the anime brawler, but it is a competent game that essentially lets you live out the dramatic battles of its anime counterpart. The variation between its characters kept things exciting when hopping between battles, and hopefully the final roster can help solidify this feeling even more.