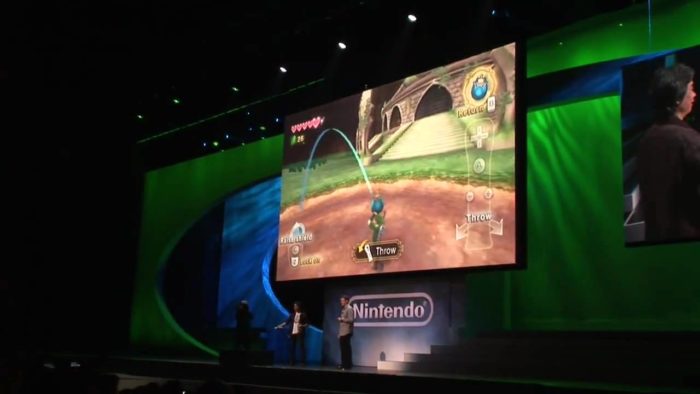 Sony’s press conferences have featured some of the best moments in E3 history, such as the back-to-back reveals of Final Fantasy VII Remake and Shenmue III at E3 2015. However, Sony most certainly has its share of embarrassing moments. Sony’s reveal of the PS3’s lofty price at E3 2006 is quite an infamous moment, but it’s not quite as embarrassing as the audible reaction from the audience when they announced their partnership with AT&T. Kaz Hirai, the Chairman of Sony Corporation, explained that “having such an impressive set of network features and ambitions requires the nations fastest mobile broadband network.” From the sounds of it, AT&T was not the company that the audience had in mind. People booed, people laughed. You can see the embarrassment on Hirai’s face. Why is it always down to Hirai to deliver the bad news to the public? I feel bad for the guy.

Murphy’s law states that “anything that can go wrong will go wrong.” When showcasing something live, there’s always a chance that some sort of technical mishap can occur. Sound errors, controller issues, we’ve seen it all, and it’s something that most humans can be understanding towards.

Unfortunately, though, it doesn’t bode well when that piece of technology that isn’t working is the main feature of your game. During the live demo of The Legend of Zelda Skyward Sword – a game that was supposed to show how accurate the Wii Motion Plus accessory was – the controller straight-up malfunctioned. It’s hard to watch Shigeru Miyamoto flail around a dead white brick for 5 minutes, and that’s essentially what we were treated to. His translator, Bill Trinen attempted some damage control by telling the audience to “turn off their wireless devices.” Needless to say, the audience’s reaction to this game didn’t quite live up to the levels of Twilight Princess.

Konami Fails at Its Own Game

Here’s a quick tip to anyone organizing an E3 press conference: When choosing someone to represent your game during a live stage demo, you should definitely make sure that they can actually play the game! That’s exactly what didn’t happen during Konami’s showing off their new Guitar Hero/Rock Band clone, Rock Revolution. If you fancy a session of ear bleeding, then check out this horrible rendition of a horrible rendition of The Ramones’ Blitzkrieg Bob. The guitarist fails out first, quickly followed by the drummer. How does this sort of thing even happen? They must have known that they sucked at the game during rehearsals? Or perhaps it was just stage fright? Normally, I would say that a live demonstration of a game is better than pre-recorded gameplay, but this incident shows that that is perhaps not always the case.

Most of us are sympathetic to technical difficulties. These things happen, we can understand that. We’re not going to judge a game if we have to wait a few minutes for the video to display correctly, but that doesn’t mean that this particular moment wasn’t hugely embarrassing for the man-made to bear it on stage. EA’s Battlefield 4 trailer at Microsoft’s 2013 press conference began without sound, leaving Patrick Soderlund, the Executive Vice President of EA, stood there like a lemon for over a minute. He handled it like a pro and didn’t drop his nerve, which was great. However, the embarrassment levels ramped up when he says “I guess we’ll see it later,” before going to walk off, and then being told to stay on the stage. That’s when it starts to cross over into cringe-worthy. Poor, poor Patrick Soderlund.


Jamie Kennedy’s ‘performance’ at Activision’s E3 press conference is hilariously embarrassing, and I’m embarrassed for him. You can criticize one-time presenters Cammie Dunaway and Mr. Caffiene all you like, but none of them hold a candle to the terribleness that is Jamie Kennedy. For starters, he showed up drunk to present Activision’s conference (which is always a smart move) and insults the audience throughout. “Uh, I see some virgins in the audience. There are so many virgins in here, Richard Branson is, uh, doing this event.” Funny… funny stuff.

If insulting the audience wasn’t enough, he then goes on to insult a developer of Tony Hawk’s Proving Ground, comparing his company Neversoft to Viagra. You can see the awkwardness in every guest’s face when talking to him. The best moment comes when a British developer flips an Ozzy Osbourne joke back at Kennedy, and then someone from the audience shouts “he’s funnier than you” at Kennedy.


Konami’s entire 2010 press conference was an extreeeeeme embarrassment, featuring the headless guy, the dancers, the death stare, and many other ridiculous moments that make it the most infamous E3 press conference ever. However, for my money, the most embarrassing moment is the Lucha Libre wrestlers. Not really for the wrestlers themselves, but because of what happens to Federico Bayer, the Director of Slang (the game’s publisher). The wrestlers have a bit of a scuffle that goes on for way longer than it should do. Bayer is yelling “save it for the ring,” but they just keep on slapping each other. One wrestler even steals the championship belt out of his hands. Then, for some reason, one of the wrestlers aggressively grabs him by the shirt. You can see genuine fear in his eyes as he is dragged backstage. The wrestlers got a bit too into the act, and I don’t think Bayer was prepared for it at all.


The year is 2011. Rumors are flying about a new console being announced by Nintendo at E3. All they had to do was show off the new console to send a wave of hype throughout the industry. So, did they do it? Uhh, sort of, but if you blinked, you would have missed it. All they kept going on about throughout the conference was the “new controller.” The actual console itself was hidden in the corner of some of the videos, and if you have an excellent peripheral vision, you may have caught a glimpse of it. I, like many people, actually did miss it. I remember watching Nintendo’s 2011 press conference with a few friends, and none of us thought that the Wii U was a new console; we all thought that it was just a controller, or an add-on to the Wii, or something?

The Wii U’s lifetime was one full of confusion, and that was very much the case from the get-go. The console’s reveal was tied to games like Wii Sports, Wii Fit, and New Super Mario Bros. The reveal trailer also focused on the “new controller’s” compatibility with Wii accessories. All of this confusion about whether it was an add-on to the Wii or not could have been cleared up by just showing the new console – and they somehow didn’t show it! They didn’t even say the word “console” once throughout the entire presentation. Nintendo must look back at this press conference in sheer embarrassment.