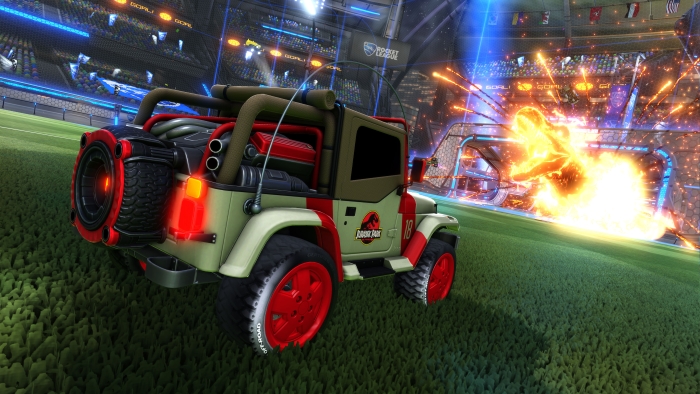 The Jeep Wrangler will be coming to the game in the Jurassic World Car Pack DLC alongside other dinosaur-related cosmetics for all platforms. The car will sport Jurassic Park or Jurassic World decals, “depending on which team you’re on in a match,” and comes with its own wheels and engine sound.

Other themed cosmetics in the pack include a topper, three player banners, three antennas, and a ‘T. rex’ goal explosion that the developer confirmed can be used with any other battle-car. The Jurassic World Car Pack DLC will cost $1.99, and can check it out in brief action from the trailer below.

This is not the first time Psyonix has collaborated with Universal Pictures with adding cars from movie franchises. Back to the Future’s DeLorean was added to Rocket League in 2015, while the Fast & Furious franchise offered Dominic Toretto’s Dodge Ice Charger and another DLC pack in 2017.

Psyonix recently added a new beach arena in the Salty Shores update last month with its Beach Blast in-game event kicking off next week on June 11. The developer has also laid out a roadmap for upcoming patches during the summer, including a complete overhaul of the game’s XP system and a Fortnite-styled Battle Pass called the “Rocket Pass.”