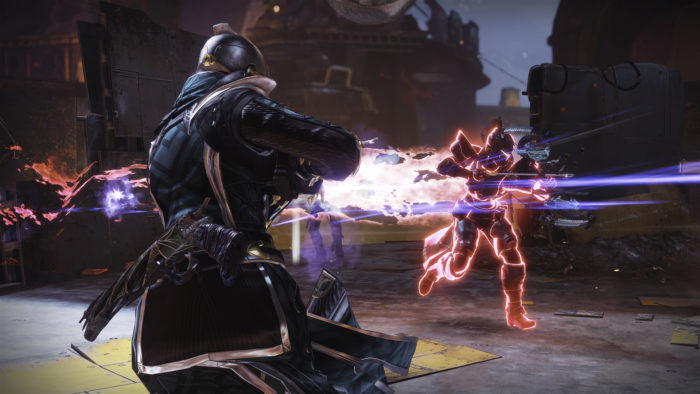 Gambit was definitely one of the most exciting parts of the Destiny 2: Forsaken reveal last week, one of many pieces of good news. This completely new game mode isn’t just a variant of PvE or PvP, but a unique competitive co-op hybrid called Gambit.

Right before E3 kicked off today, we got to go hands-on with the newest Destiny 2 game mode, and it’s fantastic. No need to beat around the bush considering the title of the article, right? Before I tell you why it’s awesome, let’s dig into how the game mode works in detail, since I got to play a few rounds of it.

Gambit, as advertised, pits two four-player PvE squads against each other in their own battlefield free of the other team. The areas are reminiscent of one of the larger Prison of Elders areas, probably a little bigger than that even. The point of the game is to kill enemies (from one of the four non-Taken factions), and when you dispatch them, they drop motes (of light?), that you can either bank right away, or hold onto them for perks (we’ll get to that in a moment). When you bank 75 motes in total, you’ll spawn a massive boss enemy. The first team to kill their boss, known as a Primeval, wins the game.

The Taken are excluded because they play a special role as a wild card faction of sorts. They are spawned by the opposing team to disrupt your progress. If you hold onto your motes instead of turning them in right away and turn in bundles five, ten, or more, you’ll spawn increasingly difficult Taken enemies on the other team’s side which prevent them from turning in motes until they take it out. So the “Gambit” is whether you want to risk holding onto motes to turn in big bundles to mess with the other team, or play it safe because when you die, you lose all the motes you were carrying.

In addition, if enough motes are turned in, you’ll open up a portal to the other side, allowing you to invade the other team, Dark Souls style. Hell, you even kind of look like an invader from those games. The invader can see how many motes everyone is carrying, and try to target people that are holding onto a lot to slow them down.

This sounds fun on paper, and luckily it works really well in practice too. It is both thrilling, and terrifying when someone invades your game. Whenever that happened, I would instantly start scanning the area (which, again, is pretty big). The invader can see your position, but you don’t have the same luxury. The invader also has an overshield which prevents that person from being killed easily. On the flip side, when invading I felt like I was on an assassination mission. I was in enemy territory and although I was the predator, I needed to be careful not to get ganged up and let my team down. What’s very cool is that when you’re invading, the normal AI enemies are on your side, meaning you can try to blend in, or stick close to powerful enemies like a Colossus to help cover you. Getting killed by invaders in the early game is annoying, but during the final frantic boss phase, it’s downright devastating.

Once a team has spawned the primeval, a portal to their side becomes permanently open. The opposing team can send someone across whenever they want. This is another gamble of course, because if you’re behind and invading the other side, you’re leaving your team trying to catch up short-handed, and it’s one less person to be turning in motes. However, getting invader kills while the other team is fighting the boss has a huge perk. Killing a player character heals up the primeval and resets their progress. When both teams have a boss spawned, it becomes a crazy race to finish where you want to kill the enemy ASAP, but you also kind of want to send someone over to try and get a kill while they are busy also trying to kill the boss.

All matches are best of three, and each round takes roughly ten minutes to complete. If a team steamrolls the other, I’d imagine it would be all over in 15 minutes. If the teams are close in skill, it could take closer to 30 minutes.

Gambit is frantic, fresh, fun, and combines the best elements of Destiny 2’s PvE and PvP with a very effective twist. It retains and even enhances the teamwork seen in both of the traditional Destiny game types when you factor in the strategy of balancing when to hang onto or bank motes, and who should invade and when. I can envision organized teams having someone who banks motes ASAP, two people who are trying to hang onto them to disrupt the other side, and a person specialized for invading and PKing the other squad. I’d love to see the best of the best one day compete in something organized by Bungie.

I have little doubt that Gambit is going to be a blast to play. The big question, though, is how rewarding it will be. I asked members of the team designing Gambit and they’re well aware that there’s an expectation in Destiny 2 that people will be rewarded for their time. At the moment they seem genuinely unsure about the rewards, as the expansion is still three months away and specifics like that are still being ironed out. That said, they are giving Gambit its own node on the director, and treating it as a full-fledged mode that will be supported well after Forsaken is released. It was encouraging to hear that because Gambit is fun as heck, and I see myself sticking around well after Forsaken is released to keep playing it.