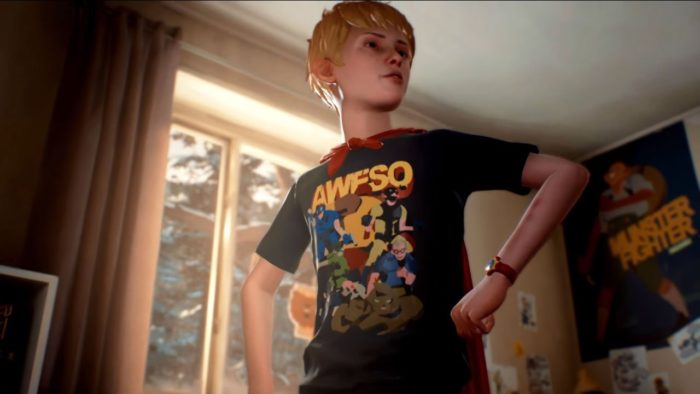 Life is Strange is best known for its complex characters who each have their own intricate backstories and personalities. Despite some of the darker story themes, it’s a fairly whimsical story of adolescence, and The Awesome Adventures of Captain Spirit plays to the series’ themes well. The free game is arriving later this month on June 26, but at E3 we got a behind-closed-doors presentation. Captain Spirit seems to be quite a short experience, but in just a few minutes with the game, it began tugging at the heartstrings, all while embracing the wonder that the inner child within each of us feels.

Captain Spirit is a standalone experience that still takes place in the world of Life is Strange, and will have some tenuous ties to the upcoming Life Is Strange 2, according to Dontnod. You play as a young boy named Chris, a boy who’s enraptured by superheroes, creating his very own hero persona known as Captain Spirit. In the game you play through a normal Saturday morning as the young boy, waking up, playing with his toys, and designing his very own superhero persona, Captain Spirit, which gives you a few choices on how to design the costume.

There’s a really charming sense of innocence to everything, as the game makes great use of Chris’ imagination to blend together supernatural style elements and a normal kid playing. In one scene, Chris uses his “powers” to turn the TV on from a distance, succeeding in his attempt before pulling the remote out of his other hand from offscreen. A later moment would have him enter the laundry room to finally defeat some kind of water monster. As he enters demonic shadowy presence blazes to life in a pitch-black room. Chris, aka Captain Spirit, uses his power to subdue the monster and gets closer until he can touch, and tame it. The second he lays a finger on the monster, we flip back to the real world and see him touching the water heater. It’s these simple, but effective fake-outs that really illustrate the imagination of a young boy.

The demo highlights a ton of different objects to interact with in Chris’ room, fleshing out the character and house, before his father calls him out for breakfast. There’s clearly an interesting bond between Chris and his father, as the older man is quite willing to engage in his son’s superhero fantasy, but disappoints Chris by drinking so early in the morning. After having breakfast, Chris is free to spend the rest of the day as he sees fit, and Dontnod highlighted a menu that shows you a number of different activities you can see through like defeating the water monster we mentioned earlier, discovering a new planet, and completing his superhero costume. The rest of the demo was spent going through the house and outside to find various pieces of the costume, and when completed, we launched into a short Sailor Moon-esque sequence that shows Chris donning his outfit.

Sadly that was all we got to see, but considering Captain Spirit is a single standalone experience, it’s understandable. Surprisingly, Dontnod’s engine does seem to have been improved quite a bit as everything has a bit more of a sleeker, more natural feel. Seeing Chris run around his house playing and pretending to be Captain Spirit reminded me of many times I did the same thing as a child, and I found myself feeling an odd sense of nostalgia. At the end of our demo session, Dontnod made sure to stress you’ll really want to explore the game when it releases, as it holds some important clues on where Life is Strange 2 is going. A note found in our demo was sent from Blackwell Academy and contained a few familiar names of minor characters. Apparently, the saved data from Captain Spirit will also carry over to Life is Strange 2, so it’ll be interesting to see how detailed these links really are.

Captain Spirit is very much a small experience, so don’t expect anything more than a few hours. However, for those pining for more Life is Strange, it certainly looks like a heartwarming tale about childhood.