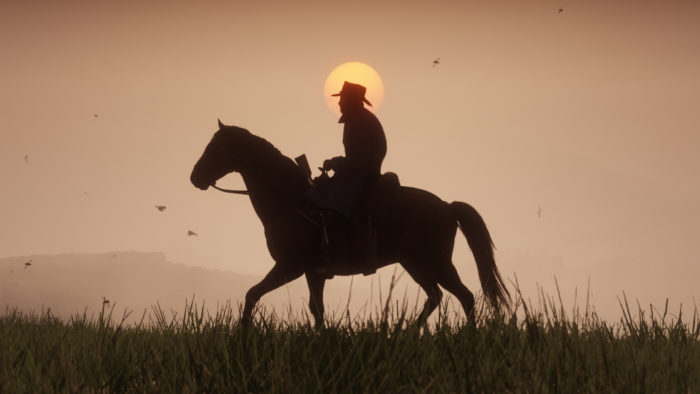 Following a substantial story trailer revealed earlier in the week, a slew of new information about new gameplay mechanics in the hotly anticipated Red Dead Redemption 2 arrived by way of IGN. A behind-closed-doors demonstration showcased a range of gameplay missions, role-playing and survival systems, as well a more detailed glimpse at some of the main characters of its plot.

Although we weren’t able to see any of the footage for ourselves, we’ve learned a great deal about the game over the past few days in combination with its latest story-trailer.

Here, we’re breaking down all the tidbits of new information on Red Dead Redemption 2 into one palatable chunk. You can check out our reaction to the recent story trailer here, or read some deeper opinion on what appears to be a Red Dead heist tease, here.

The Environment is a Living and Breathing Place

We’re stoked to hear that Rockstar Games is putting a special emphasis on packing Red Dead Redemption 2’s wild west setting with a level of detail that sounds truly astonishing. NPCs will have their own daily routines, your character’s appearance will determine their level of aggression, and strangers will react suspiciously depending on the time of day you approach them.

Also of great interest was the manner in which conversations with NPCs appear to initiate based on proximity rather than at the press of a button, and it’s set to change how we perceive main and side missions. No longer will the difference be so obviously highlighted, but rather, each adventure feels as though it eventuated seamlessly depending on how you choose to traverse the world.

On the subject of decision making, Red Dead Redemption 2 is said to feature a much more sophisticated interaction system than anything we’ve seen from a Rockstar game before. Each NPC can be gestured at in a different fashion depending on the options that pop-up on the bottom right side of the screen. These, as we well as the nature of the way conversations now appear to work in the game, seem to suggest that decision making on the fly is likely to play a key role in the game dynamic. Based on situational occurrences, players are going to have the option to shape their experience based on these quickfire choices.

Those quickfire choices also seem to emerge during more intense gameplay scenarios, too, such as during the robbery mission that was shown to IGN’s editor. It sounds as though players are going to have to make spur of the moment decisions that shape the outcome of each mission in different ways. If the game truly does throw these at players frequently, it will certainly keep us on our toes. Although quite how consequential they’ll actually prove to be, we’re not sure – does it matter whether your female accomplice pretends to be innocent or drunk, for example?

Survival and Management Mechanics to Play a Much Greater Role

As Outlaws, Dutch’s crew aren’t able to live in permanent residences. Instead, they maraud around the countryside, setting up temporary camps and living both off the land and by pilfering loot from anyone unlucky enough to get in their way. But the size of their crew means that foraging berries and pinching the odd loaf of bread isn’t going to suffice. Instead, players will have to hunt some pretty serious sized game to meet the crew’s nutritional requirements.

IGN commented that the area in which the action was taking place was packed with wildlife. Birds, deer, and even bears were spotted roaming the wilderness. It sounds as though sustaining Dutch’s crew is likely to comprise a key survival mechanic in the game that players are going to spend quite a bit of time with. And, indeed, during the demo showcased to them, IGN witnessed a rabbit being hunted with a bow and arrow, describing the process as much more visceral and intense than it typically is in many open world games.

Just as in games such as Kingdom Come Deliverance, any meat you harvest from your hunt will rot if not quickly eaten or sold. That likely makes each kill a more calculated decision than simply opening fire on random bunnies you come across out in the wild.

Ultimately, satiating the needs of Dutch’s crew sounds as though it’s a factor that’s going to require management on the player’s part, both in terms of planning how they’re kept happy and the logistics of how to go about bringing them to fruition.

Horses Are Much Changed

We noted in our trailer impressions post that horse taming seemed to be a gameplay mechanic that Rockstar Games was teasing, and that sounds as though it’s been all but confirmed according to IGN’s preview. It was suggested that the intention of the developer was to create a sense that your horse is more than just a mount: it’s your companion, too. You’ll form a bond with it through nurturing and grooming, which presumably will increase its stats and abilities. It’s also going to be more than just transport, carrying your items and equipment as well. This lean towards a more realistic approach to movement and item hauling should work well in tandem with an increased focus on survival mechanics in the game.

It certainly sounds as though the developers are weaving a fair amount of realism into the fabric of Red Dead Redemption 2. Let’s hope that it adds to the experience rather than bogging players with too much to do in the back and forth.

Dead Eye, the targeting system from the first game in which time is slowed down so that players can accurately take down a group of enemies, is back. The system is said to have changed little from what we’ve played through previously – the screen turns a crimson color and Marsden is able to select targets before the game snaps back into real-time and targets are felled in quick succession.

It’s probably a case of if it ain’t broke, don’t fix it in Rockstar’s eyes, which, to be fair, is probably spot on. I certainly enjoyed the mechanic in the first game and it’s nice to hear that Rockstar isn’t flipping the blueprint on its head for the sake of it – it’s Red Dead reinvented, but core mechanics aren’t being scrapped unnecessarily.