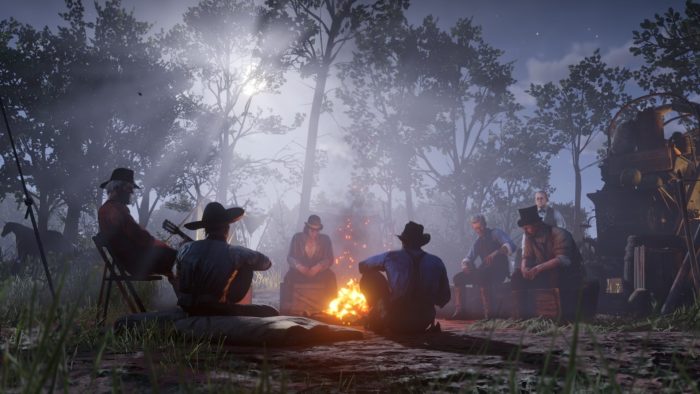 I adore open-world games, but I’m the first to admit that while the design has the potential to elevate a gaming experience to brilliance, it can massively detract from it in equal measure. We’ve all been frustrated by fetch quests at some point, and we’ve likely all noted the check-box nature of open-world gameplay loops that can quickly turn into tediously formulaic exercise. Let’s not even get started on marking enemies while stealth-running base takeovers or climbing tall landmarks to unlock new areas of the map, either.

Ultimately, for too long the genre has been treading water rather than pushing forward to that next dimension of realism and immersion that I so desperately want it to achieve. Indeed, so in vogue is the design choice that we’re seeing it stagnate just as other genres like first-person shooters have done before it. Yet there’s so much more potential to unlock beyond just implementing the design to create an illusion of greater content, or the capacity to add more later down the track – which I’m sure has become a key part of the decision-making process at many a publisher’s behest.

Thankfully, salvation sounds as though it might be on the way in the form of Rockstar Games’ hotly anticipated sequel, Red Dead Redemption 2. Beyond just a stunning aesthetic, huge scale, and the reliably on-point storytelling we’ve come to expect, from what we’re hearing, the developer is making some pretty serious attempts to completely shake up and redefine what quality open-world game design means. A truly believable, dynamic, and immersive open-world sounds a lot like nebulous PR rhetoric we’ve been promised before, but this time I think there might actually be some substance behind it.

What has really caught my attention is the notion “Rockstar is trying to blur the lines between what’s a story mission and what’s a side quest, instead presenting them all as opportunities” with proximity-based NPC conversation. The idea that interactions are more organic than simply walking up to a character and pressing a button – a design choice that has literally existed since the earliest inception of the contemporary open-world blueprint – is inspiring. We desperately need to get away from the overly structured quest-taking design in open-world gaming. There has to be a way to make each adventure feel unique and memorable based on the experience, rather than because it falls into category A or B or c, Main Quest or Side Quest or Errand.

All easier said than done, of course, but if Rockstar can really change the way we discover these activities and make the process feel less systemic according to lists and checkboxes, sign me up.

There’s also talk of NPCs having their own actual daily routines that extend beyond sweeping the same patch of ground for hours on end – each having a purpose with much more substance than merely existing just to create a shallow facade of realism. And it sounds as though you’re able to upset those routines, too, and quite how those encounters play out is determined by your mannerisms and appearance. A holstered or drawn gun provokes different results – something we’ve seen before, sure; but what about the idea that NPCs react suspiciously when they’re out alone in the wilderness at dusk and react suspiciously to your approach? The fact that a kind of danger-factor has been written into the NPCs code does sound as though it’s a step beyond even the most convincing environments we’ve seen before in gaming.

Not that if Red Dead Redemption 2 does deliver in these features that it would be the first to pioneer new invention in the genre, of course. For every dozen cookie-cutter open-world games in recent years, there have been a few standouts that are sure to go down as seminal landmarks within the context of the genre. The Witcher 3, for example, reset our expectations with regards to depth of storytelling beyond what had been established by beloved classics like Skyrim. And the physics that governed Hyrule in The Legend of Zelda: Breath of the Wild in combination with the climb-anything traversal mechanics introduced a whole new level of interactivity we’d never seen before, moving things on even further from the revelation of Assassin’s Creed’s parkour that is now over ten years old.

Ultimately, though, even the most critically acclaimed and polished of modern open-world packages still abide by an ancient rules – design choices that have remained largely unchanged since the inception of the genre. It all centers around this issue of players too vividly being able to see the bottom in everything they undertake. That is to say, we’re too familiar with open-world mission structure, and the illusion of self-discovery is so rarely executed properly because the accepted rules just don’t really allow for it. It all stems from having to approach NPC A and accept a mission, then being deferred to NPC B for the item you’re looking for, then watching that NPC walk to a corner and lean against a wall that he’ll remain at for eternity – it shatters the immersion and believability that even sublimely pretty and detailed environments attempt to create.

If Rockstar Games is really attempting to create a world in which you’re never quite sure when one quest ends and another new one begins; that’s very exciting news for anyone looking forward to Red Dead Redemption 2. Enough with ticking objectives off a list. That’s not building an immersive open-world, it’s just using a sandbox level design, and I’ve seen quite enough of that. It’s time to push the genre forward in a meaningful way, and so my hope is that Red Dead Redemption 2 is more than just another super-polished version of everything that’s come before.