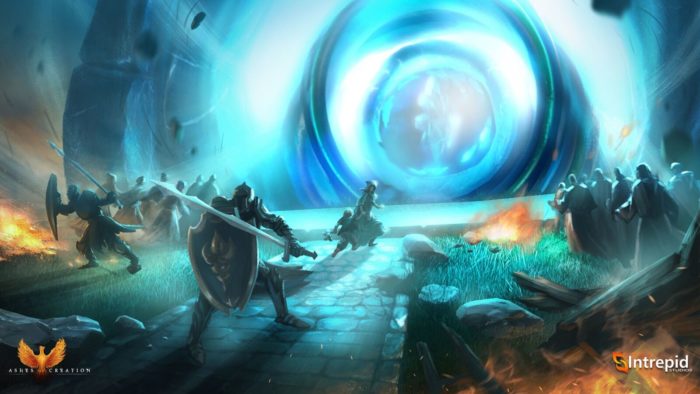 On paper, Ashes of Creation is one of the most ambitious MMORPGs to be in the pipeline in recent years. Of course though, they all sound that way before they come out, and then hardcore players get their hands on them. They’ll rush to max level and figure out the optimal way to break down an end game that seemed really engaging during development, into something that is trite and boring.

It’s probably a reason why MMORPGs are becoming rarer and less innovative. Games like World of Warcraft and Final Fantasy XIV, as Steven Sharif, founder of Intrepid Studios and creative director of Ashes of Creation, put, “demand a lot of gravity.” It’s safer to emulate what is tried and true and avoid innovating and creating risks because of the amount of time and resources it takes to make a proper MMORPG. You don’t want to end up like all the other games that tried to do something new, failed, and brought the company down with it.

I challenged Sharif on his plan for Ashes of Creation to not only survive, but also thrive; to not end up like every other game with cool ideas that didn’t pan out in reality. He fully admitted that he understands how difficult it is to pull players away from games like WoW that have been established for years and have players very invested in them.

What Ashes of Creation has going for it is that it was funded through Kickstarter and Sharif himself, meaning the creative direction is up to him, and there’s no publisher involved that could force his team to drive Ashes of Creation into a direction they don’t want to go. And, because he’s the person in charge, he can say with confidence that there won’t be any unsavory monetization practices forced upon players, emphatically telling us that there would be no pay-to-win whatsoever in Ashes of Creation.

On top of that creative liberty, Sharif has made the choice to be as transparent as possible about development, allowing players to see and play Ashes of Creation, even in a pre-alpha state (which we went hands-on with at PAX East). He admits that it’s a double edged sword because of the obvious and inherent dangers of letting passionate fans see mechanics that are raw and unfinished but still believes it does more good than harm.

What everyone is going to want to keep their eyes on is the node system. This is by far Ashes of Creation’s most unique and ambitious feature, as it will give players an incredible amount of influence on the game’s world both in PvE and PvP. Nodes refer to areas that players can settle and build up over a period of time, depending on player cooperation and population in that node. These dynamic villages and metropolis will rise up, and depending on the in-game race that actually put the most effort in, certain quests and secrets will unlock. If other groups of players want access to different activities than what that city can offer, then they will have rise up and bring the city down to create new content. Or even if player interest and population shifts to somewhere else on the world map, not maintaining a city will revert it back to its more humble roots.

The node system was Sharif’s answer to my concern about Ashes of Creation’s end game. A common problem in lots of multiplayer RPG games, not just MMORPGs, is that once players reach the end of the road in terms of content, there needs to be something worth doing, otherwise people will drift off. Some games create this artificially by having low drop rates to keep people trying. Destiny 1 is a great example of this. While it had its flaws early on in terms of a lack of content, there were at least enjoyable end game events, and weapons worth grinding every week for because of how fun they were to use. Destiny 2, on the other hand, still has that same fun-to-play game, but removed equipment that was worth grinding for. So in this case, players reached the end game, played everything and left as soon as they realized there wasn’t anything left to do, or to keep playing for. Other titles, like Final Fantasy XIV, combine the grind with a steady stream of new stuff to try out.

Sharif describes Ashes of Creation as a PvX game, believes PvE and PvP needs to “live in harmony” and wants to see a world where harmful and unfun PvP practices like PKing or griefing are nonexistent, but there still exists the opportunity for players to develop friends and enemies with other groups of players, and the nodes exist to naturally facilitate these interactions.

In Ashes of Creation, not only will there be monthly tweaks, and quarterly content updates, players will be constantly altering the landscape of the end game every time nodes rise and fall. Sharif told us that player action data will be monitored at the start, and will allow the team to quickly react to practices that they perhaps didn’t anticipate, or that are subverting the fun or dynamism of the node system.

Even Ashes of Creation’s combat is taking a bold approach. The game features traditional tab and attack combat seen in older MMORPGs, and combines it with action gameplay seen in games like TERA. We went hands on with a lengthy quest while at PAX East, but because the game is in such an early state, it’s hard to gauge how well it’s coming along. For example, I played as a tank, but with our GM guide around, the enemies made a beeline to him instead of me. The enemies seemed toned down to prevent death, and the UI isn’t yet complete, but I did get to see where they are going with that traditional/action oriented approach to combat and it has potential if the fights and party dynamics are well put together and fun.

Players will have a main class and a subclass that can augment the abilities of the main, such as a tank that can use magic to maneuver around their enemy. Also, monsters, even if they appear similar, may have different AI which effect the way they act. For example, the brood mother boss enemy we fought at the end of our demo, always attacks whoever is closest, regardless of who is generating the most hate. So in this fight, tanks should be up close, while everyone else should keep their distance.

I didn’t know much about Ashes of Creation before my time with it at PAX East. It had a hugely successful Kickstarter (raising over $3 million), and an impressive looking booth on the show floor, but I’ve seen that before with other MMORPGs that ended up flopping. I can’t say for sure that Ashes of Creation is definitely going to avoid that fate because of how difficult it is to penetrate into the MMORPG market right now. However, after speaking with the creative director, and seeing it in action (even in a pre-alpha state), I can confidently say that I haven’t been this excited for a new MMORPG, well, ever. As described, the game sounds like a dream come true for the MMO fan that wants a dynamic PvE and PvP game, that isn’t just a clone of what is currently popular. And if Ashes of Creation goes the way of so many others and fails, I think my hope for something new and fresh in this genre to succeed will be permanently shattered.