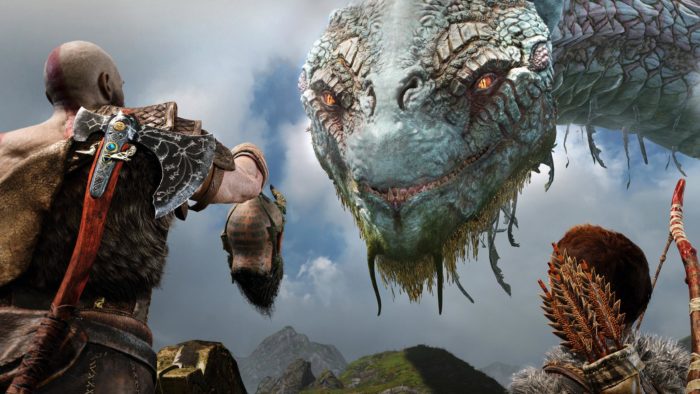 Get Used to the Combat

Combat in the latest God of War game is rather different from the arcadey action longtime fans might be used to. The hack-and-slash elements are still present, but players will need to be a little more thoughtful and methodical with how they handle themselves in a fight.

For starters, all enemy attacks are properly telegraphed, and you’ll see a yellow or red ring around them right before they strike. When you see it, make sure to dodge out of the way instead of trying to get some free hits in. There’s no stamina bar in God of War, so you’re free to dodge spam your way out of danger whenever you want. Just be careful not to roll into an enemy attack.

The default HUD options will also display enemy detection markers around Kratos’ body, allowing you to be aware of where your foes are. As you get into the rhythm of the combat system in God of War, try experimenting with new moves by unlocking abilities from the skill tree and throwing your Leviathan Axe at enemies more frequently.

Also, don’t forget that you have a shield to block attacks with, and you can always sheathe your weapon to do melee damage. Sometimes, using melee attacks and Atreus’ arrows to stun enemies before attacking can be more efficient than just hacking away with the Axe.

When you’re first starting out in God of War, the combat might seem a little simplistic. That’s because all of the cool fighting moves you’re probably used to from the previous games are locked away in the skill tree. As you kill more enemies and complete missions, you’ll earn XP, which is used to unlock skills from the tree.

We definitely recommend improving Atreus’ Talon Bow and combat abilities in God of War. He becomes an invaluable ally very quickly when you’re in a fight, and he can stun enemies on his own, and even distract them so Kratos can focus on other targets. As you unlock the different arrow types, his utility increases even further.

Kratos himself also has some pretty nifty skills, though you’ll need to find the ones that best suit your play style. The shield tree can unlock a parry ability, which is very useful for players who love using the shield, though I found myself gravitating more towards the Axe abilities that allowed me to become more proficient at throwing it around to hit more enemies at once.

Don’t forget that new skills are unlocked each time you upgrade the Axe and Talon Bow with the blacksmiths.

Leveling up is pretty important in God of War, so it’s vital that you understand how the progression system works in this game. As mentioned before, XP is reserved solely for unlocking abilities in the skill tree; it doesn’t have anything to do with increasing Kratos’ character level. Instead, your level is determined by how strong your equipment is.

For instance, upgrading your Axe to level 2 will boost your character level progress. By equipping higher leveled armor, your progress towards the next level will increase as well. Your character level is really important, as even enemies that are only two levels higher than you can demolish Kratos with a few hits. So, make sure you’re always upgrading your gear whenever you find a blacksmith.

Do note that the little things matter as well. Enchantments, talismans, and even the Axe pommels have a level number attached to them, and they’ll affect your level progress.

After meeting Sindri, the second blacksmith, and clearing your next main story mission, you’ll unlock your first Favor in God of War. Favors are just side missions that you can pursue in your spare time, and these will reward you with large amounts of XP and Hacksilver. The Favors in God of War are really well-done, as they flesh out the game’s story and world even further, and rarely ever feel like busywork. They’re a pretty fun distraction, and serve as a good opportunity for you to farm resources and obtain better gear, so we definitely recommend doing these as they present themselves.

Favors show up on your map and screen as blue markers, and you can select them from the Goals tab in your main menu.

Don’t Worry About Those Obstacles

As you journey through the frozen lands of Midgard, you might come across a few pesky obstacles blocking a chest or an optional pathway. These could be branches, red orbs, or doors locked with an ice panel. Don’t worry about these; you’ll gain the ability to bypass all of these if you keep playing through the main story.

On the other hand, when you find Nornir chests with blue runes etched into them, definitely stop and take the time to try to open those. These chests contain health and Rage meter upgrades, which will come in very handy when you face off against tougher enemies. Opening these chests are a simple matter of finding three bells or pots in the area with same runes etched into them, and then breaking them.

Be sure to check out our wiki for more tips, tricks, and information on God of War.