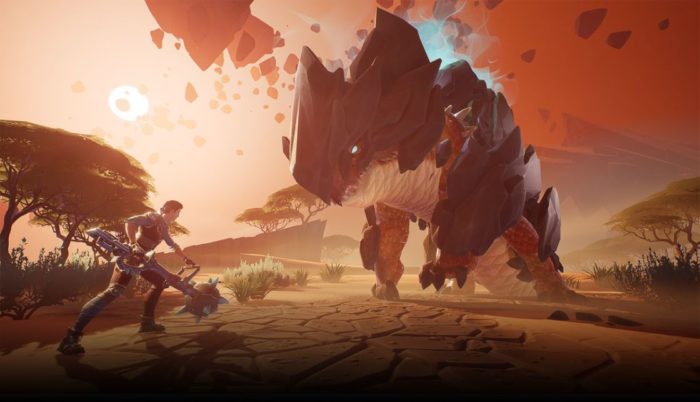 Dauntless, the upcoming ambitious indie from a “super” team featuring former employees from companies like Riot Games, Blizzard, BioWare and Capcom, is barreling into open beta starting on May 24. At PAX East 2018, we had another opportunity to give Dauntless a go and, once again, were left impressed by what we played. Even in an unfinished state, Dauntless feels incredibly polished and satisfying to play. This is especially true in its combat which is self-described (and confirmed) to have a Souls-like feel that rewards smart tactical choices and severely punishes greedy play.

At this point, we’re feeling confident about Dauntless’ core gameplay features. Fighting behemoths is very fun as a team, and the elements that support the gameplay, like classes, abilities, and equipment, are all enhancing that core experience in an effective way from what we can see so far. We’ll have to see how all of these bite-sized tastes we have gotten will mesh together in a final product, but right now it’s looking very promising.

So then, rather than glow about that all over again, we wanted to find out more about what Dauntless’ development roadmap is like: pre, during, and post-launch. We had the opportunity to chat with Jordan, a member of their marketing and production team, to talk about these plans and more.

Starting with the open beta coming up, the team right now is focused on getting rid of all the placeholder UI that’s still in the game. According to Jordan, they have already gotten rid of most of them, and soon players will be able to experience a new, much more visually appealing UI. Also, transmogrification is on the way, and while the team is still finalizing how players will have access to it, there will be some kind of system in place for changing the look of your equipment in-game soon.

What was especially interesting from my conversation with Jordan was our discussion about Monster Hunter: World. Rather than feel threatened by Monster Hunter: World, the team is emboldened by its successful launch. Jordan had this to say about what impact MHW has had on the Dauntless team:

“I think that the way that it most impacted us was that our team too like two days off to play it. Everyone in the studio are huge Monster Hunter fans. We had a guy, I think it was one of the engineers, who hit high-rank in like the first day. Everyone was loving it and having such a good time with it. And it has brought more attention to the genre and that’s nothing but beneficial to us. We’re super happy that the game is awesome, we’re enjoying it and we’re excited for more people to come and play these hunting type games.”

Monster Hunter: World was a critical and commercial success, and the Dauntless team doesn’t appear to be operating in a bubble universe where they expect to not be constantly compared to it. I asked then if there was anything that the team in particular admired about MHW and if there was anything that inspired them. The environment/feeling that MHW accomplished in its zones was something that the Dauntless team really enjoyed.

“We love the feel of all their environments and how alive it was. It definitely made us take a step back and look at our own environments and be like, ‘what can we do to make this feel better?’ because you walk through and you feel like you’re there. Everything is so alive and there is so much interaction. And compared to what we’re doing, we’re like, we need to turn it up a bit. So we’ve already started doing that. We added traversal elements and it’s something simple but it makes getting around so much more fun. We want to keep doing more and more stuff to liven up the environment.”

On the flip side though, there are aspects that the Dauntless team is more confident in than ever after playing Monster Hunter: World, and that is the combat. Whether or not you prefer Dauntless and Monster Hunter: World’s combat is going to come down to personal preference. Count me in the camp of really enjoying Dauntless’ style. And unsurprisingly, the team appreciated what they have put together after coming back to it from playing MHW.

In a world where games as a service is such a hot button issue, I had to ask about Dauntless’ end game, and whether or not they have plan in place for keeping players in for the long haul. Over the last few years, for better or worse, the gaming landscape has shifted to a place where it’s not enough to just be fun, especially for multiplayer-only games. There needs to be an end game that’s worth playing through to make the game feel worth a player’s time investment.

I asked about Dauntless’ end game plans, and what the post-launch plans are, and here is what Jordan had to say:

“For us, we don’t necessarily want an ‘end game.’ We’re calling it our ‘ever game.’ Essentially what it is, is constantly repeatable content that will change and that you can play in perpetuity. So that might be something as simple as an environment modifier, or you take more damage and the behemoth does more damage, stuff like that. Simple modifiers and getting more and more complex with it. Taking it, and giving it extra.

There are so many good hunts and it’s like, how can we make this more challenging without just being harder? Because we can obviously just turn all the behemoths up to eleven. But that’s not what we want to do because it doesn’t change the experience, it just gets harder. That’s not what Dauntless is about. It’s about learning, getting better, it’s about getting challenged but not feeling like you’re being punished.”

“We are definitely planning on supporting Dauntless for the foreseeable future. For as long as we can. We already have a couple of other behemoths in the works. Concepts are being thrown around for new weapons, new armors, new quests, all sorts of stuff like that, everything that we can add to make Dauntless better and better.”

Dauntless’ PC open beta begins May 24. If everything goes smoothly on the PC front, according to Jordan, playing on other platforms will be possible at some point in the future.