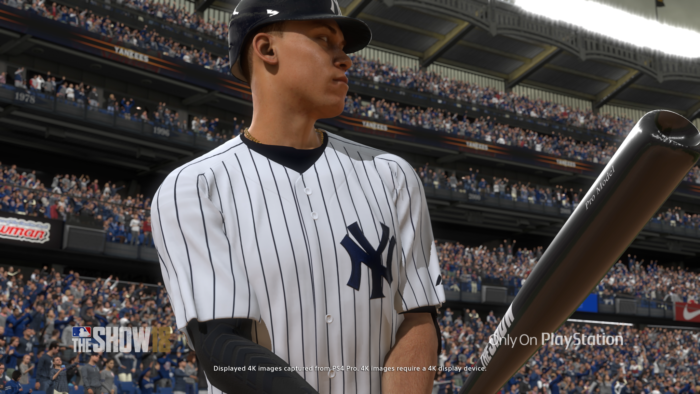 Review in Progress: MLB The Show 18 on PlayStation 4

Why a review in progress for MLB The Show 18: As you’ll see below, we’re really enjoying the tweaks and improvements that San Diego Studios has made to both Franchise mode and especially Road to the Show. However, online servers will not be activated until release, and we don’t feel comfortable giving a full score until we have a chance to go hands-on with everything new in Diamond Dynasty, and until we can ensure that the online play is up to snuff. We’ll have a fully scored review ready next week after launch.

While other sport game franchises have had their ebbs and flows throughout the years, SIE San Diego Studio’s PlayStation exclusive, MLB The Show, hit its stride quickly and has just focused on not messing with a product that baseball game fans have more or less been happy with. That doesn’t mean The Show as a franchise is without flaws, of course. Creating an accurate sim that reflects real life stats as closely as possible is a challenge each year. Contact physics each year need to be tweaked as skilled players will pretty quickly find the best way to hit home runs and abuse it online. And, with no competition, San Diego Studios has yet to be pressured to add any radical new game types, niche modes like Retro and Conquest aside.

All of that said, this year in MLB The Show 18, San Diego Studios has gambled quite a bit by dramatically shaking up one of their most popular game modes, Road to the Show. For players fearful of change, it might be too much to bear, but the changes definitely help to make RTTS as realistic as it has ever been, and also streamlines the mode greatly to make it more about getting into games quickly and having fun. Let’s just jump right to it then.

Training points are out. Gone, kaput. You still have overall ratings, and you still have Showtime and perks, but no more hoarding points and dumping them wherever you want. Instead, you have an Elder Scrolls/Fallout-like system. Yeah, I’m comparing MLB The Show 18 to games like Skyrim, we’re going there. Instead, your in-game actions automatically boost relevant attributes. Take a good pitch? Your plate discipline will go up. Take a good swing? Plate vision will get a bump. If you commit an error, your fielding will decrease, and so on and so forth. At the end of each game you can review the breakdown of what you accumulated and watch your stats go up.

Another new layer on top of that is player archetypes. When you start your RTTS character, you’ll be able pick a “class” of sorts, which will determine the caps on certain attributes. So someone who chooses to be “Mr. Reliable” will be able to max out their contact attributes at the expense of not having as much power.

I can see this pissing off some people, for sure. Especially those that want total control over the progression of their player. Personally I find it wonderful. I like that I don’t have to worry about figuring out what I should put my points into first. I just play the games, and my stats will naturally (and more realistically) go up, or down if you really struggle. You can’t just swing and miss at every other pitch and then go dump a bunch of points into contact and plate discipline. You have to earn it by, you know, actually showing some patience at the plate.

If you’re worried that you’ll have to now dramatically alter your playing style, don’t stress about that. After each series, you can train or work out with a player/coach to either boost the rating on one of your attributes or raise its cap (you don’t start at the max for everything). This adds yet another layer of choice, and tough decision making.

All of these changes make RTTS a lot more interesting than just playing a bunch of games, dumping a bunch of points, and getting back to the grind. There’s a little RPG in my baseball sim and I’m not against it. That said, while the gameplay aspect of RTTS is at its height right now, there’s still a long way to go before MLB The Show 18 gets to the level of story drama seen in games like NBA 2K and, more recently, Madden’s Longshot.

RTTS got the most dramatic change this year that we can see. The rest (aside from Diamond Dynasty which we haven’t played yet) are much more subdued and safe. Franchise now has something called “phases” which breaks the season up by important dates that GMs need to pay attention to such as draft day and preparing for the trade deadline. However, I see this only really mattering to inexperienced GMs. Anyone that plays Franchise a bunch like I do is already well aware of what to do when important dates like July 31 start creeping up. Aside from that, the other major thing Franchise players will notice is the ability to play their game in retro mode which isn’t a game changer and more a novelty than anything, but still gives that mode a little bit of the spotlight instead of being tucked away in a back menu like last year.

There are some neat aesthetic changes too that hardcore fans of their created characters in either RTTS or Diamond Dynasty will appreciate. You’ll now be able to customize your own batting stance. Although it’s limited to staying within the realm of what’s physically possible (bummer), it’s still something I didn’t know I wanted until I got it. Also, unsurprisingly, given the out of control beard situation in the MLB, beards, facial hair and just everyone in general look much more realistic. Star players specifically look noticeably better this year.

Finally, there’s even smaller, but still welcomed additions that add on to MLB The Show 18’s immersive elements. Stuff like rain delays (which force you to decide whether or not to keep your pitcher in depending on the length of time), better crowd animations and dynamic crowd sizes (based on the score and day/time), make slogging through your season more dynamic. It’s hysterical to think that rain delays would be an exciting new feature to advertise in a video game but it really is. Outsiders would just use it as another reason to call the sport “slow,” but baseball fans will totally get it, and be into it.

So far, then, this is the best way to put it. If you’re a RTTS player that isn’t married to the old training point distribution system, you should really enjoy the changes that make the mode far more streamlined and fun and it will make MLB The Show 18 definitely worth picking up. If you’re a fan of Franchise, well, they didn’t mess with anything, but the new stuff is far more muted than in RTTS. Everyone benefits from stuff like new commentator dialogue (which we’ll talk more about next time once I’ve had more time to hear it) and more bat flip animations. Yes, there are lots and lots of ways you can flip your bat.

The verdict is still out on Diamond Dynasty and online games, along with seeing how the improved physics shakes out in online play. So we’ll hang tight on a full score until we can get our hands on when the servers go live at release.