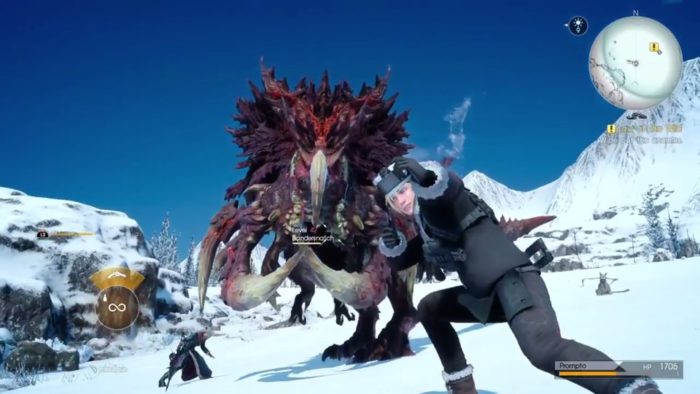 From the very first time we played Final Fantasy XV on home consoles in 2016, it was immediately apparent that every aspect of this game was lovingly and painstakingly crafted, and it resulted in a world that was robust, lively, and thriving. Artistically, it was among the finest in the series’ history – grounded in reality, but with enough vision and whimsy to maintain the familiar elements of its mythical roots. And visually? A triumph. Meticulously rendered models, deeply considered down to the finest detail.

It was the kind of thing you could immerse yourself in, based on nothing more than simply how it looked. If it appeared perfect to you at the time, that’s because it pretty much was. But the standard of perfection is not static, and it evolves at a rapid pace. In technological terms, the time that has elapsed since Final Fantasy XV’s initial launch on PS4 and Xbox One – not even 16 months – practically equates to a decade worth of progression. So how did Final Fantasy XV improve on visual perfection? In layman’s terms, it became even more perfect.

Be warned, this kind of performance does not come without the necessary tools to support it. For laughs, I gave it a shot first on an old Acer laptop with a Core i5-5200 2.20GHz processor, just slightly less than what is specified as the ‘minimum requirements’ (best use of a 16 GB installation ever!) and was treated to beautiful, crystal clear visuals that ran at approximately one frame per pensive thought. The fan began to whir wildly, as though it hoped to literally blow the game away, so I quickly fled to the safety of an i7 processor, complete with a hefty GTX 1080 graphics card, for good measure.

And that was when the game dazzled (and actually ran at a playable frame rate, too). When at its optimal level, the graphics pop in ways they never have before, with resolution that is absolutely exquisite. It feels like the true realization of the zealous vision we first fell in love with back in November 2016, even if it’s not immediately apparent. Perhaps the best way of contextualizing the seismic leap the graphics have taken is by comparing it to its predecessors – doing such shows the niggling little things of yesteryear that you may not have noticed. On the micro, the PC palette seems to have a few more colors at its disposal, yielding richer visuals in each and every scene, while in the macro sense, the character models show vast improvements, particularly in their hair. Occasionally, follicles on the console versions will seem jarring and unnatural – an issue which has been rectified on the PC adaptation.

This is all well and good for people armed with computers stronger than Hercules himself, but what about the rest of the unwashed masses? Will they be left in the dust, lumped with a game that fails to impress? If they’re using a TravelMate laptop from 2015, then yes, they will. But fortunately, as most logical people wouldn’t even attempt such sacrilege, they will be pleased to know that Final Fantasy XV Windows Edition is suitably versatile, with robust graphical settings to suit their needs.

Tinker with the framerate and resolution as required, as well as more specific details like dynamic hair/fur, ambient occlusion and even grass simulation. Basically, the game wants to run as best as it can on your PC, and throws as many different variables as it can come up with to help make this so. In today’s era of exclusion, where major cities in World of Warcraft have become uninhabitable for weaker PCs since flying mounts were allowed, it is a breath of fresh air.

Incidentally, if you’re morbidly curious, bringing the resolution down to 50% isn’t quite as grotesque as you’d think on your average wide angle. It ends up looking like an overly ambitious PS2 title – perfectly playable in most cases (aside from the aforementioned hair, which has now become tattered beyond recognition). The true cruelty occurs in the cutscenes however, an absolute affront to all that is holy. But you probably expected that from 50% resolution, didn’t you?

Beyond appeasing your eyes, the PC version also yields a variety of other prizes with the inclusion of all past DLC and the introduction of an additional first-person mode viewpoint shared by the consoles’ newly crowned Royal Edition. Oddly enough, watching video footage of this feature in action doesn’t quite do it justice, for better and for worse, and it isn’t until you see things from Noctis’ perspective firsthand that you really feel its effects. Being able to experience the various locales and skirmishes for yourself can fill you with joy, allowing you to soak in the grandness of Square Enix’s vision. Alas, it can also fill you with befuddled rage, as you are pelted with attacks from every angle, and the rapid jumping of the camera instills a sensation of vertigo. In that regard, it’s a reminder of why fighting in video games is more enjoyable than fighting in real life – you’re less in control of the battlefield, and every movement counts. At the end of the day, it turns out to be exactly what you would have expected: a novelty, more than an alternative.

Boasting customizable controls and a maximum of 60 fps (literally twice that which we saw on the PS4 and Xbox One), Final Fantasy XV Windows Edition feels definitive in every sense of the word. For those who have already played its predecessors to death, it likely isn’t worth making the leap to PC, unless you have a keen fetish for performance. But if you had only minor dalliances, or hadn’t even bothered to try it at all, this is the way to do it. It reeks of polish, and just might be enough to sway the demographic soured by the departure from the traditional turn-based formula. The upcoming remake of Final Fantasy VII, on the other hand…