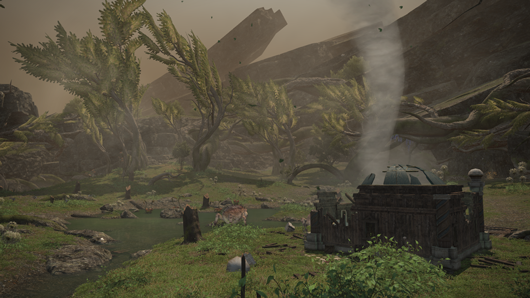 Nearly three years ago, back during the Heavensward days of Final Fantasy XIV, players were given the opportunity to explore new lands and engage in special FATEs through a special activity known as the Diadem. Since the launch of A Realm Reborn, most of Final Fantasy XIV’s content had been relegated to instances and duties, and the Diadem was meant to serve as a break from all of that and provide players with a more open area where they could do their own thing. The problem? It got way too grindy way too fast, and the rewards and gear you could get there were rarely ever worth the time you had to spend to get them.

The Diadem was deemed a failure. And since then, Square Enix has opted to take a different approach to how players could spend their time outside of regular dungeons and raids in order to get new gear and level up. One particular highlight was the Palace of the Dead, which was a fantastic way of letting players experiment with new jobs and earn some sweet experience points and a fancy new Kinna weapon. But Square Enix never came back to the Diadem idea. Well, until now.

Similar to the Palace of the Dead, where everyone starts from level 1 before working their way to the top, Eureka features a similar system with elemental resistance. From what we know of Eureka so far, every monster you encounter is assigned an elemental type, meaning you’ll have to exploit their elemental weaknesses in order to take them down. Every player starts from elemental level 1 and you’ll have to gain experience points before you’re able to fight properly. Once you hit level 6, you’ll start getting penalties for dying. Interestingly enough, Yoshida also mentioned that monsters will chase players all over the map once they’re detected, which means that you can’t just shake them off after running away for a bit. This should make the Forbidden Land much more chaotic and dangerous when you’re alone.

Speaking of being alone, a good change that Square Enix has implemented into this new activity is the ability to enter Eureka solo. While Diadem required you to have a party to enter, Eureka doesn’t impose strict limitations on your entry. You’ll still have to get in through the Duty Finder but you can queue up alone and explore and grind at your own leisure. Even better, you’ll even get to join up with other players already in the world once you get in. The amount of freedom and fluidity you get with who you can party up with is a great tweak that fans sorely missed in Diadem, so this is definitely going to make a lot of people happy.

So, overall, the Forbidden Land is looking great so far. It’s a big open world area that fans can dive into, and there are interesting mechanics to keep players invested for a while. If Palace of the Dead was any indication, the separate leveling system and the weapon/armor strengthening features should be appealing enough to stand on their own. Enemies chasing you everywhere, coupled with the penalty of losing experience and levels when you die, the Forbidden Land also sounds like a great throwback to how the systems used to work in FFXI, and this should cater to longtime Final Fantasy MMO fans as well.

Patch 4.25 is sounding really promising, though I’d probably still be a little cautious in my optimism when it comes to the grinding involved for the new relic weapons. Final Fantasy XIV players know how tedious that whole process can be from past expansions, and there’s little doubt that it’ll be just as time-consuming here. All of this is good news, though. The Stormblood expansion was released just last year, and it’s going to be at least another year or two before we see the next big expansion drop.

Just as Palace of the Dead was a jolt of sorely needed new content for the Final Fantasy XIV community in-between Heavensward and Stormblood, the Forbidden Land of Eureka could very well be the next major time sink activity we get to lose ourselves in for the foreseeable future.