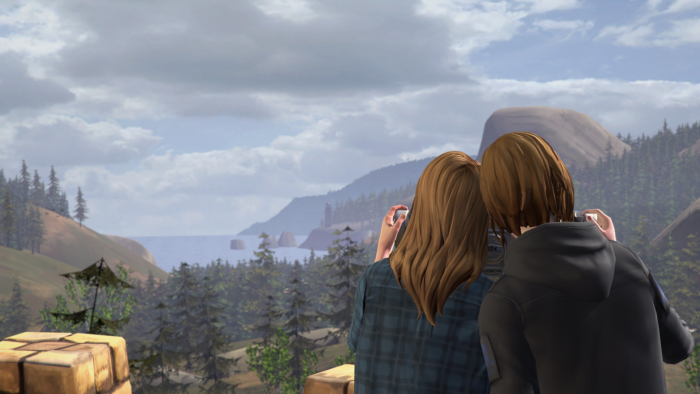 [Endless Playlist is a series of monthly articles where we pick a video game soundtrack for discussion, try to provide a critical analysis of how it performs within the game it’s from, and decide how it holds up on its own. This month, we’re breaking down Life Is Strange: Before the Storm’s soundtrack.]

How fitting is it that the very first piece in Before the Storm’s exquisite soundtrack should so perfectly encapsulate the Life Is Strange narrative? The ennui of teenage life, the longing for something that feels out of reach, the inevitable sense of hope that arises from pain and heartbreak.

Glass is the first track Daughter opens up with in Before the Storm’s soundtrack, and it serves as the closing theme to the first episode, Awake. The deep guitar strums evoke memories of the original Life Is Strange. At first, everything feels acoustic and familiar, like how you’d imagine the Arcadia Bay hipster student anthem would sound, if they had one. Then the guitar fades and distorts, giving way to vocals that are foreign and new before launching into a proper drum beat as the guitar kicks in once more. Glass retains shades of musical themes and notes reminiscent of the original score, but does enough to differentiate itself from the old.

Glass marks the return to Arcadia Bay, and also the start of a new story.

Life Is Strange didn’t just wow players with its gripping time travel sci-fi story and lovable characters, it made an impact with its music as well. But while the licensed music never ceased to impress in both the quieter and more dramatic scenes (alt-j snooze song hype), the original score itself was largely forgettable, save for the fantastic Max & Chloe. With Before the Storm, Square Enix and Deck Nine Games enlisted the help of British indie folk band Daughter for the score, and it ended up being the best decision they could’ve made for the game’s musical direction.

As vocalist Elena Tonra explained in a development video, all of the tracks had to contain some element of grief because of how integral it was to the story’s core themes and plot line. Which, y’know, makes sense, considering that Life Is Strange itself is a pretty dark series that deals with so many heavy issues.

Aside from Glass, The Right Way Around would probably be the next most recognizable track from Before the Storm. While it doesn’t actually play within the game itself, it’s the theme you hear as soon as you boot up the game. Again, it’s so wonderfully chilled and laidback and just so quintessential Life Is Strange in a way that the original score never was. Similar to Glass, this track employs the use of a solo acoustic guitar and faded vocals, along with a booming electric guitar later on to highlight Chloe’s teenage angst.

All throughout the soundtrack, Daughter layers their music with multiple instruments, from vocals to heavy drums to electric guitars, lending it a much richer sound than what we got from the original. Hope, for instance, is an uplifting lyric-less guitar anthem for most of its listen time, before Tonra enters the fray to croon about being reborn and rising up once more. The perfect track for Chloe’s happy shower scene, which takes place immediately after she makes concrete plans with Rachel, and she decides to give her hair a blue streak just for the hell of it.

Within the game itself, Before the Storm’s soundtrack also makes use of little musical tricks to relate to whatever’s going on in the story. Flaws is an outstanding example of this, serving as the final track we hear at the end of the first episode. The music starts off slow and tentative, just as Rachel comes to terms with her feelings about her father’s actions. Even in its delicate opening seconds, you can sense the tension within the soft piano notes, and that disturbing sensation only persists as the distortion starts to seep in. And sure enough, just as the static pops, the beat drops, and the vocals come in full force, Rachel has kicked the trash can over, immediately igniting the whole forest on fire.

Flaws continues to soar as a track, with the vocals leading it into a powerful crescendo. Then emotions start to come down and settle again as the music calms itself and we’re treated to a glimpse at how this fire would eventually affect the other citizens of Arcadia Bay. Flaws is an exciting track by itself, made all the more impressive by how it’s incorporated into the game.

Before the Storm performs a similar trick with Improve, which you could probably dismiss as one of the more forgettable pieces, if not for the way it was used within the game. The funny thing about Improve is that if you listen to the full version on the soundtrack, it’s actually a rather sinister piece, but we never get to hear it in the game itself. In fact, we only ever get to hear the beginning bit, the nice, lovely, unassuming guitar bit. Everything else – the static, the deliberate off-notes, and the scary far-off drums – never gets featured in the game. But once you’ve actually played through the entirety of Before the Storm, it becomes a little clearer why.

Improve plays during a very specific segment in the second episode. When Chloe’s in the boys’ dorm looking for Drew’s room, she has the option to snoop around Eliot’s stuff as well, and this is where the track starts. It’s so soft you probably wouldn’t even notice it at all. But once you start looking at Eliot’s desk and you find his creepy obsessive poems about Chloe, you’ll read through them and put them away when you’re done. And the second you back out from reading the poems, the music is cut off abruptly, and you’ll explore the rest of the dorm in silence. It’s a pretty clever trick to unsettle the player right after reading the creepy stalker stuff, and it soon becomes clear that Improve is meant to sort of be Eliot’s character theme. He comes off as a nice enough guy – harmless, just annoying with the way he’s crushing on Chloe. But then that facade quickly falls away when the poems reveal a darker side. Enter the jarring, clashing notes of the latter half of Improve.

Except, again, the game deliberately cuts off the track before it reveals too much. Clever game.

Unlike the original game, Before the Storm does fall a bit short when it comes to the way it implements its licensed music. Whereas the original really punctuated its narrative with appropriate pauses and interludes (Santa Monica Dream, To All of You, Obstacles, The Sense of Me, Spanish Sahara… I could go on, really), Before the Storm dropped the ball a little in this department. There are highlights, to be sure (Taking You There instantly comes to mind), but the licensed tracks just weren’t as impactful here as they were in the original. Life Is Strange’s licensed music felt like a genuine playlist Chloe could’ve made for Max, but in Before the Storm, they feel carelessly picked.

Even so, props to Deck Nine for choosing to close out the game with Bros. If there was one licensed music moment they absolutely had to nail, it was the ending of episode three, and they did so perfectly.

The 13-piece soundtrack of Life Is Strange: Before the Storm is lovingly crafted from start to finish, with every track serving some sort of meaningful purpose within the game itself. There are some pitfalls, whether it’s a case of a piece sounding too musically blasé, or the lyrics being way too on the nose to be considered cleverly written. But despite all that, Daughter has managed to capture the essence of what makes Life Is Strange so great and relatable. Much like its narrative, Before the Storm’s soundtrack illustrates the wonder and excitement, along with the fear and anxiety, that comes with being a teenager just trying to figure life out.